Indonesia’s federal government has embarked on the most ambitious REDD program of any major forested nation, but it’s not easy to implement such a program in a land of a thousand islands spread across two million square kilometers. Here’s a look back on the early days of REDD in Indonesia and around the world 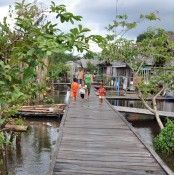 28 October 2014 | After their first meeting with Todd Lemons at the Orangutan Foundation International (OFI) orphanage in Pangkalan Bun, the OFI team started reaching out to friends in the local ministry of forestry while Birut© Galdikas started angling for a meeting with federal Forestry Minister Malam Sambat Kaban. Lemons, meanwhile, went back to Hong Kong to work his rolodex in search of businesses that shared his enthusiasm for using carbon offsets to save forests.

The two were hardly the only ones pursuing REDD financed in Indonesia in 2007, for the country was gearing up to host year-end climate talks on the resort island of Bali. President Susilo Bambang Yudhoyono had brought the talks here to shine a light both on the role that forests play in regulating climate and on the role that economics plays in driving deforestation. For that, Indonesia was a perfect showpiece. Cheered on by the rest of the world, the country had successfully built a $20-billion-per-year palm-oil sector a stunning economic achievement, but one that came at the expense of its forests and the traditional people who lived in them. In becoming the world’s largest producer of palm oil, Indonesia had quietly become the third-largest emitter of greenhouse gasses, and by 2007 the cheers were turning to jeers even as the Western appetite for cookies, crackers, and toothpaste continued to drive the destruction.

More and more people, however, were beginning to realize that you can’t slow deforestation without addressing the economic activities driving it, yet there was little consensus about how to do that. After all, palm oil is a global industry as are timber and paper and “greening them requires global solutions that address the activities of consumers, intermediaries, and producers. Proponents of REDD saw it as an effective mechanism for at least partially addressing the production component, but critics saw it as a distraction from the larger issues of sustainable supplies.

Governor Irwandi Yusuf of Aceh Province was an early proponent.

Roughly 2000 kilometers to the west of the operation that Lemons and Galdikas were undertaking, Yusuf was looking to save a rapidly-disappearing forest called the Ulu Masen Ecosystem. It spread across 750,000 hectares, and the consulting team he hired, headed by John-O Niles of the Tropical Forest Group, estimated that an 85% reduction in deforestation would prevent more than 3 million tons of CO2 from billowing into the atmosphere every year.

Yusuf began spearheading what would have become the largest REDD project to date one designed to slow deforestation in part by jump-starting sustainable palm oil, coffee, and cocoa programs. This would ensure that the activities driving deforestation in Ulu Masen don’t just migrate down the road (a process called “leakage”), but are instead transformed into more sustainable practices that continue to meet existing demand but without killing the forest. He then implemented a moratorium on illegal logging across the entire province and even began to personally lead raids on loggers camps to enforce the moratorium and show potential investors that he was serious.

It was a gamble that cost his province millions in the short term, but it also made sense because the Bali talks were supposed to culminate with the creation of a successor to the Kyoto Protocol. To do that, they would need to bridge a schism between industrialized nations and developing countries a bridge built in part on REDD offsets. The World Bank had already created the Forest Carbon Partnership Facility (FCPF), and Australia had pledged $100 million to support REDD efforts on Borneo.

There was just one problem: no two people seemed to agree on what REDD was, exactly.

Shades of REDD: Projects and Programs

To understand the state of REDD in 2007 and even today you have to understand it’s history. The mechanism began to germinate in the late 1980s, and North American energy provider Applied Energy Services (AES) became an early proponent when it started looking for ways to reduce its carbon footprint by saving endangered rainforest in Paraguay Mbaracayº Forest. To do so, the company worked with Paraguayan NGO Fundacion Moises Bertoni (FMB) and the indigenous Ach© people as well as North American NGO The Nature Conservancy to create a 300,000-hectare zone of sustainable agriculture around a 64,000-hectare private reserve. To calculate the amount of carbon locked in trees, they adapted long-standing practices from forestry and the timber trade. The procedures they used then aren’t much different from those used today: they went out and measured the trunks of trees, then used trigonometry to estimate their height, and finally they applied formulas to extrapolate the carbon content.

Experimental REDD projects were beginning to take shape across Latin America, but the experimentation wasn’t focused so much on measuring the carbon content of forests as it was on measuring the impact that project developers had on that content. In the argot of the industry, experimentation was focused on creating a “baseline” deforestation rate, or a “reference level” that would represent the best estimate of what would happen if business as usual continued. REDD credits would then be issued for the difference between that reference level and the final results.

REDD continued to evolve throughout the 1990s, but traditional environmental organizations like Greenpeace fought to keep it out of the Kyoto Protocol. In 1997, they succeeded. That year, the Kyoto Protocol was finalized, and REDD (then still called “Avoided Deforestation”) was excluded from the list of recognized mitigation activities. There it remained until the end of 2005, when Papua New Guinea and Costa Rica pieced together the Coalition of Rainforest Nations with the aim of getting REDD onto the agenda at 2005’s year-end climate talks on Montreal. This was the year the Kyoto Protocol came into effect, and it was also the beginning of negotiations to forge the Protocol’s replacement, since it was only slated to run through 2012. Papua New Guinea spearheaded an effective campaign to get REDD on the post-Kyoto agenda, and when the Montreal talks ended in December 2005, REDD was in.

But all those years that REDD was out of the United Nations climate mechanisms, it was continuing to evolve in voluntary markets, and by 2007 there were nearly 20 voluntary carbon standards under development, generating scores of methodologies for measuring man’s impact on forests. When climate negotiators allowed REDD back into the climate talks, they created a new category separate from the projects that people like Lemons and Yusuf were developing.

So as talks approached, REDD was running on two parallel tracks: the“project-level track that had been evolving on the ground, and a new “programmatic” track that was coalescing in the minds of negotiators. While projects would cover small patches of endangered forest, programs would cover entire countries or at least states within countries. At the time, the general assumption was that the tracks would cross in the emerging “jurisdictional approach that would let individual projects “nest” within programs that covered entire jurisdictions. When California’s then-governor, Arnold Schwarzenegger, launched the Governors’ Climate and Forests Task Force to facilitate agreements between states in different countries, Yusuf was among the first to join.

The project-level approach and the programmatic approach each had its own strengths and weaknesses: neither can be called simple, but projects are at least small and manageable compared to entire countries, but they are also limited in scope, and some of the deforestation they prevented inevitably “leaks” to other locations (Project developers do account for leakage and have to subtract it from their total credits, but they can’t eliminate it).

The Art and Science of Measuring Forests

Steve Zwick is Managing Editor of Ecosystem Marketplace. He can be reached at szwick@ecosystemarketplace.com

It’s Not Easy Being Green in Aceh, Indonesia

We all use palm oil every day, and nearly half the world’s supply comes from Indonesia with devastating results for the country’s forests and the global climate. Fixing it is no easy matter, and in Palm Oil vs The Peatland Forest, we examine efforts underway to shift palm oil development from forests to degraded land an act that requires nothing short of a complete restructuring of Indonesia’s rural economy. We begin by speaking with Heru Prasetyo, the man charged with overseeing this massive land-swap. Then we go small and follow one conservation project in Borneo as it struggles to get off the ground, which brings us into the highest levels of Indonesian government and the challenges of creating sustainable supply chains in the face of global demand.

Part One: Can This Indonesian Official Execute The Largest Voluntary Land-Swap In History? We speak with Heru Prasetyo, the man charged with developing a national regulatory regime for Reducing greenhouse gas Emissions from Deforestation and forest Degradation, plus other changes in land-use (REDD+).

Part Two: The Primatologist And The Entrepreneur We learn how palm oil development threatens Borneo’s Seruyan Forest, and we meet the primatologist and the entrepreneur intent on saving it.

Part Four: Wrestling With Orangutans: The Genesis Of The Rimba-Raya REDD ProjectWe listen in on the first face-to-face meeting between Birute Galdikas and Todd Lemons, and learn what drove them to form their historic partnership.

Part Five: Indonesia Goes REDD (Sort Of) 2007 was a pivotal year for REDD in Indonesia and around the world. We offer a snapshot of REDD as it takes hold in Indonesia under the leadership of then-President Susilo Bambang Yudhoyono.

Part Six: The Art and Science Of Carbon Accounting How do carbon accountants measure the amount of carbon trapped in forests? We offer an overview of the science and policy to date.

Part Seven: Rimba Raya Takes Shape We follow Birute Galdikas as she navigates Indonesia’s political structures and Todd Lemons as he reaches out to businesses and scientists to lay the groundwork of what became the Rimba Raya REDD project.

Part Eight: The Giant AwakensThe Rimba Raya project faces opposition from palm-oil giant PT Best, triggering a battle that reaches to the highest echelons of Indonesia’s power structure and beyond.

Part Nine: The Challenge of Sustainable Palm Oil We examine the demand side of the equation and learn why past efforts to promote sustainable palm-oil development have failed. We then learn how current efforts differ from those of the past, and see how they dovetail with Indonesia’s efforts to execute the largest land-swap in history.

Part Ten: The Land Swap We conclude by wrapping up the various strings and seeing how they all converge in the government’s REDD+ Agency. We take stock of the agency’s efforts to-date, and examine the challenges that lie ahead.