Nature and Culture International is establishing Ecuador’s first water school, an institution created to train municipal water workers in the skills required to join and administer a water fund. The water fund model continues to experience success in managing Latin America’s stressed water resources and the school is meant to help scale up its use. 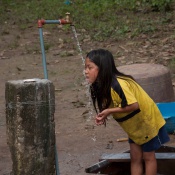 3 August 2016 | For some water technicians working in Ecuadorian municipalities, class is about to be in session. Earlier this month, the California-based NGO Nature and Culture International (NCI) announced the launch of Ecuador’s first water school, intending to train municipal workers in the skills needed to join a water fund. These skills include establishing and monitoring watershed reserves and determining the proper allocation of funds for different watershed conservation activities.

The Tinker Foundation, the private foundation from New York, awarded NCI a three year USD $420,000 grant to create the school that will initially educate 24 municipalities in Ecuador. The school is a continuation of NCI’s work in the region. It’s focused on the ecosystems and people of the Andes and Amazon region and established the Regional Water Fund of Southern Ecuador (FORAGUA) in 2009. FORAGUA enrolls municipalities of all sizes into a single integrated water fund that manages local water resources.

According to a World Water Council estimate, 77 million people living in Latin America lack access to clean water and the use of water funds as a solution to this monumental challenge continues to grow. The New York Times reported on their proliferation back in 2009 and NGOs such as The Nature Conservancy, a pioneer of the model, and Natura Bolivia have helped launch water funds in various countries including Bolivia, Peru and Ecuador.

Essentially, water funds are a mechanism to finance watershed management that ensures water quality. Water users within a watershed pay into a fund and those funds are then funneled toward conservation activities such as reforestation or riverside restoration. These activities help secure a safe and steady supply of water for nearby communities along with protecting biodiversity and caring for the overall wellbeing of the ecosystem.

Since its enrollment in FORAGUA, the city of Loja is reporting that water is more consistently available during times in the year when it’s typically scarce. According to NCI, FORAGUA has resulted in 174,028 acres of land legally protected as municipal watershed reserves, where watershed managers practice conservation and sustainable land-use. This restores and protects the drinking water supply system for 430,000 people.

Why a Water School?

“The water school is a tool to scale up and replicate a successful payment for environmental services model to provide clean abundant water to thousands of Ecuadorians while helping conserve Ecuador´s incredible biodiversity,” Renzo Paladines, NCI Ecuador’s Executive Director who also serves on FORAGUA’s board of directors, said in a statement.

The idea for the school came out of a need to build capacity within the municipalities NCI is working with, says Christine Andersen, NCI’s Grants Manager. She explains that traditionally, NCI is performing the lion’s share of the technical aspect of managing the water fund. However, project managers would like to pass this role over to the municipalities allowing NCI to play more of an advisory role.

“We thought there really needs to be a way to build the technical capacity so the municipalities can eventually take on the water fund and the watershed program,” Andersen says. This conversation led to the development of an education program designed to support this transition.

After the school’s three year grant period ends, FORAGUA will assume primary responsibility for it though NCI expects to start filling Technical University of Loja classrooms with municipal technicians in March of 2017.

Programming for the school is divided into three cohorts to accommodate the different knowledge and experience levels the pupils have of water funds. The plan is to school five to 10 municipalities at a time with one course per year that takes no less than six months but no more than one year to complete.

“Each course will include comprehensive training to accomplish the multitude of tasks necessary to enroll or develop a water fund to support watershed management,” Andersen says.

While NCI is still in the process of finalizing the program, a curriculum outline document lists course topics that include conservation management, legislation, community outreach and conservation incentives. NCI and project partners, the National Water Secretary (SENAGUA), the Loja regional government and the Technical University of Loja will teach the courses.

While the Technical University of Loja, and three of its satellite campuses, will largely serve as the school building, Andersen says that some of the schooling will take place in the field. The university also has an online platform in the works.

Andersen adds that the Technical University of Loja is in the early stages of developing a water quality protocol. The monitoring protocol can be used for analyzing water quality trends as well as the effectiveness of municipal watershed management activities. When the protocol is fully developed, the school will integrate it into the curriculum.

The school also has a support system where NCI’s technical staff and FORAGUA will guide the water school enrollees between courses.

The initial 24 municipalities that the water school will serve have either expressed interest to join a NCI-administered water fund or are already part of one. According to Andersen, eventually all municipalities enrolled in a NCI-administered water fund will be required to have at least one water resources employee who has completed the water school program.

NCI is already thinking beyond the municipalities it currently interacts with. Anderson notes that the curriculum includes topics for non-participating municipalities so as to pique their interest and include them. Other regions in Ecuador, such as the provinces of Napo and Sucumbíos, have expressed interest in setting up something similar to FORAGUA, but require technical and administrative assistance.

Spurring a Scale Up

In terms of ultimate objectives, NCI has a numerical one where it wants to see 265,000 acres become legally protected as municipal watershed reserves during the grant period. It also wants to see national and local support for a school that thoroughly teaches communities how to effectively manage their water resources.

Ultimately though, Andersen says this project is about documenting the use of water funds and expanding their use throughout Ecuador, Latin America and even outside the region.

First Person: How 11 Ecuadorian Cities Pooled Their Resources To Support Their Watershed