Representatives from roughly 130 governments are converging on New York city today to sign the Paris Agreement that was reached in December, and the We Mean Business Coalition says that implementing that agreement will unleash more than $13 trillion in new investment – or $100 billion for everyone who signs. That’s just one reason this year’s Earth Day is completely different from all those that came before. 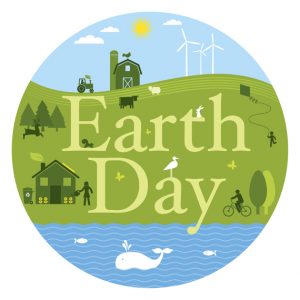 22 April 2016 | Houston is drowning and the Brazilian Amazon is baking – along with large parts of California – while average global temperatures seem destined to rise at least 1.5 degrees Celsius (3.6 degrees Fahrenheit) over the next century.

That’s the threshold beyond which climate science gets foggy, and it’s gonna be a challenging hundred years, to say the least, but there’s reason to celebrate this Earth Day.

In part, that’s because leaders from some 160 nations – among them 50 or so heads of government – are converging at the United Nations headquarters in New York to sign the historic Paris Climate Agreement that was adopted four months ago in Paris. That agreement will come into force as soon as 55 of them put their names on the dotted lines (provided they account for 55% of the world’s greenhouse-gas emissions).

We’ll reach that threshold, and the only question is: which country will be the one to bring us over the top? That alone makes this year’s agreement a far cry from the “Kumbayah” events of Earth Days past, which were often high on symbolism but weak on substance – but it’s not just because so many political leaders have taken up the cause. More critical is the engagement of the private sector.

Yes, some “good” companies like Unilever, Marks & Spencer, and Microsoft have carried the torch for years, but most have either ignored it actively or tried to kick it to the ground. That’s all different now.

The meeting comes just two weeks after the world’s largest publicly-traded coal company, Peabody Energy, also became the 50th coal company to declare bankruptcy since 2013 – a downside that the We Mean Business Coalition says will translate into a $13.5 trillion opportunity as countries implement the Paris Agreement. Put another way: each country that implements the agreement contributes $100 billion to the pot, on average.

At the same time, more than 100 global companies have endorsed US President Barack Obama’s Clean Power Plan – a cornerstone of the US contribution to the Paris Agreement.

Nothing like this has ever happened before, and it all swirls around the Paris Agreement.

In the new podcast, Bionic Planet, Ecosystem Marketplace editor Steve Zwick will be unpacking at least one hidden gem from the Paris Climate Talks each week. We’ll be harvesting material from Ecosystem Marketplace and presenting it in audio form, while further exploring the interaction between man and the planet’s living ecosystems. Be sure to check out our latest installment below.

Carbon Markets in the Paris Accord

The agreement, however, doesn’t explicitly mention carbon markets at all, but instead assumes that countries will develop them domestically. It’s contribution is to recognize this and to say that countries can trade “Internationally Transferred Mitigation Outcomes” (ITMOs) among themselves to deepen the targets they’ve set in their Nationally-Determined Contributions (NDCs).

“These paragraphs do not, by themselves, create a market or a price for carbon,” wrote Andrei Marcu, founder and former CEO of the International Emissions Trading Association (IETA), in a paper for European Policy Studies (CEPS). “What these paragraphs do is provide the ability to create an international market if any Parties so desire.”

The word “market”, he points out, is nowhere to be found in the agreement, and that’s OK.

Formal negotiations won’t resume until the Bonn Climate Change Conference in late May, but there’s been a whirlwind of activity around two multilateral initiatives. One is the Carbon Market Platform that Germany and Japan launched in October at the behest of the Group of Seven (G7) industrialized countries (Canada, France, Germany, Italy, Japan, the United Kingdom, and the United States). The other is a commitment to developing standards and guidelines for the environmental integrity of markets that New Zealand launched the day the Paris Agreement was adopted. Eighteen countries have endorsed the New Zealand declaration to-date, including Germany, which has reached out to New Zealand about pooling their efforts.

“We are keen to talk with countries about advancing the development of the global market and crucially, putting in place the standards and guidelines for environmental integrity,” says Kay Harrison, who heads the New Zealand Environment Ministry’s climate initiative.

Likewise, the G7 effort now finds itself with a much clearer mandate than it did before Paris, and it is in the process of updating its agenda to reflect that.

“We’ve had to re-shape the platform in light of the Paris Agreement,” says Julia Kleinschmidt, the environmental economist who’s spearheading the effort within the German Ministry of Environment. “We’re also looking to expand beyond the G7, and we hope to add other major emitting countries – like Brazil and China – maybe in the next few weeks.”

“There are certainly some difficult issues, but a lot of it’s minutia,” says Jeff Swartz, IETA’s International Policy Director. “The planet can’t wait for all that to be worked out, and the spirit of Article 6 is quite clear. It says to countries: ‘You can go pursue your approach, but just make sure the accounting provisions are consistent with what’s defined at the UNFCCC.'” 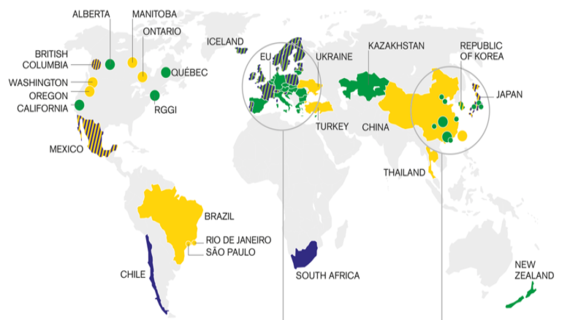 Nearly 40 national and more than 20 sub-national jurisdictions are participating or preparing to participate in emissions trading systems today, and other countries are considering other market options. Source: The World Bank

Article 6 of the Paris Agreement lays out two paths that countries can use to trade their emission reductions internationally, and the two paths are not mutually exclusive. The first is the “cooperative” approach, which lets countries coordinate trading among themselves, provided they follow accounting principles that pass muster with the United Nations Framework Convention on Climate Change (UNFCCC). On the ground, this might resemble the kind of market linkages that California and Quebec have forged (with Ontario soon to join) and that China and South Korea are thinking about.

The second path, championed by Brazil, will be forged within the UNFCCC itself and offer a centralized mechanism for transferring emissions reductions. This centralized approach will likely build on the market infrastructure and experience of the Kyoto Protocol, so it pays to look back on it.

Forest Carbon in the Climate Accord

The mechanism now known as “REDD” (for “Reducing Emissions from Deforestation and Degradation”) began percolating way back in the early 1970s, when physicist Freeman Dyson asked a simple question: “Can we control the carbon dioxide in the atmosphere” by planting trees that breathe in carbon dioxide and breathe out oxygen? His answer: yes, we can, but we’d still need to slash our industrial emissions to prevent catastrophic climate change. In the late 1980s, a policy analyst with the World Resources Institute named Mark Trexler realized you could sponge up even more carbon dioxide if you saved endangered rainforest rather than planting new trees, and the energy company Applied Energy Services (AES) worked with him to reduce their carbon footprint by doing just that.

To measure the carbon, they used the same process that timber companies use to estimate the amount of wood in a forest: basically, measuring trees at chest-height and then applying “allometric equations” to see how much wood – and, by extrapolation, carbon – they contained. To determine which parts of the forest were in danger, they used a combination of econometric modeling and historic rates of deforestation (a process that was rudimentary at the time and resulted in over-counting, but which has been improved and refined over the years).

Since then, indigenous people from Brazil to Kenya have used REDD to save endangered forest by jump-starting sustainable business activities like harvesting acai berries or Brazil nuts, or even just adopting more efficient woodstoves. From the start, however, REDD was plagued by the false duality that sees an either/or relationship between morality and markets – a view just as crippling as the pure free-market fundamentalism that got us into this mess. (It’s a way of thinking that also concludes you either save the forests or you reduce industrial emissions; in reality, we must do both.)

Article 5: REDD+
Article 5 contains just two paragraphs, but those paragraphs refer to at least a dozen decisions and elements of other agreements, and the entire history of this extraordinary document is there if you know to look for it.

Paragraph 1: Parties should take action to conserve and enhance, as appropriate, sinks and reservoirs of greenhouse gases as referred to in Article 4, paragraph 1(d), of the Convention, including forests.

This refers to that part of the framework convention itself that recognizes “common but differentiated” responsibilities between rich and poor countries, and also the need to promote the sustainable management of natural carbon sinks, including “biomass, forests and oceans as well as other terrestrial, coastal and marine ecosystems.” It’s echoed in the Paris agreement, which recognizes the “importance of ensuring the integrity of all ecosystems, including oceans, and the protection of biodiversity, recognized by some cultures as Mother Earth, and noting the importance for some of the concept of ‘climate justice’, when taking action to address climate change.”

Paragraph 2: Parties are encouraged to take action to implement and support, including through results-based payments, the existing framework as set out in related guidance and decisions already agreed under the Convention for: policy approaches and positive incentives for activities relating to reducing emissions from deforestation and forest degradation, and the role of conservation, sustainable management of forests and enhancement of forest carbon stocks in developing countries; and alternative policy approaches, such as joint mitigation and adaptation approaches for the integral and sustainable management of forests, while reaffirming the importance of incentivizing, as appropriate, non-carbon benefits associated with such approaches.

This is a mouthful, so let’s break it down. “Results-based payments,” means money, to be paid from one country to another based on the amount of extra carbon the receiving country keeps locked in forests as a result of actions that countries take to slow deforestation. These payments may be “market-based”, which means the country paying for them then gets to reduce its own emissions by the additional amount of carbon locked in trees, or they may be “non-market” based, in which case the country receiving the payment also gets credit for the emission-reduction achieved – but that is dealt with in Article 6.

“The existing framework as set out in related guidance and decisions already agreed under the Convention,” refers to roughly a dozen decisions made over the years regarding the measurement of forests, the establishment of reference levels, and the role of indigenous people in preserving forests.

“Activities relating to reducing emissions from deforestation and forest degradation” refers to REDD, but without mentioning the acronym directly, because it’s become a target for people with duality delusion syndrome.

“While reaffirming the importance of incentivizing, as appropriate, non-carbon benefits associated with such approaches,” refers to things like biodiversity and the protection of indigenous rights.