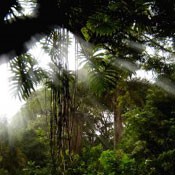 “Our partnership with New Forests will provide the Tribe with the means to boost biodiversity, accelerate watershed restoration, and increase the abundance of important cultural resources like acorns, huckleberry and hundreds of medicinal plants that thrive in a fully functioning forest ecosystem,” said Thomas P. O’Rourke Sr., Chairman of the Yurok Tribal Council.

On the voluntary side, the last installment of Ecosystem Marketplace’s buyer series explores why the National Geographic Society – perhaps best known for the stunning photos featured in its magazine – has been investing in forest carbon. Nat Geo purchases offsets from a reforestation project in Panama, an avoided deforestation (REDD) project in Brazil, and another REDD project in the Yaeda Valley of Tanzania to neutralize the impact of various aspects of its operations.

“Some people are not going to be comfortable using carbon offsets to counter their greenhouse gas (GHG) emissions,” National Geographic’s Chief Sustainability Officer Hans Wegner admits. “But we feel they are a viable way to deal with those emissions we cannot eliminate in our operations. So long as they are third-party certified, audited, and properly accounted for, we consider them an important tool.”

In global news, the United Nation’s (UN) Millennium Development Goals are set to expire in 2015, and countries are hard at work coming up with some new resolutions to rudder global development over the next generation. Forests are one of 32 themes addressed in the Sustainable Development Goals (SDGs), which a 30-member UN Open Working Group discussed in Indonesia last week.

Peter Holmgren, the Director of the Center for International Forestry Research (CIFOR), made a presentation to the group, highlighting the fact that forests are relevant to many of the other items on the world’s to-do list, from poverty eradication to food security to sustainable agriculture to water. Unlike the Millennium Development Goals, which were sector-specific, the SDGs will be set more holistically – lending themselves to a ‘landscape approach,’ Holmgren says. He suggests nine specific forest metrics that could be used to track progress going forward.