The Yawanawa tribe of the Amazon rainforest are in the midst of a rebirth, one that involves access to education, leadership roles for women and economic projects that sustainably utilize forest resources. The Yawanawa people’s journey back from the brink involves a life plan that guides them in preserving their territory and traditions, and fighting climate change in the process. At a TEDWoman talk today, the Yawanawa people tell their story. 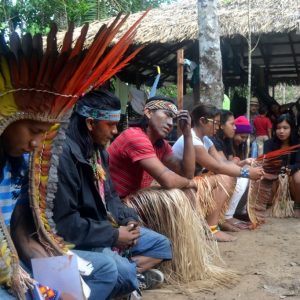 27 October 2016 | When Laura Soriano arrived in her new husband’s native community 16 years ago, the Yawanawa people were in danger of becoming a lost culture of the Amazon rainforest, like other indigenous cultures gone extinct in the region.

The tribe was still reeling from the loss of life and territory suffered at the hands of rubber barons, missionaries, and other outsiders for much of the 20th century. Women had virtually no voice in community affairs and decision-making. And with no schools available to them, some young Yawanawa left the rainforest to seek education and jobs in Brazilian cities.

Today, that Yawanawa tribal community is in the midst of a rebirth – and the role women play in the community has undergone a radical change as well:

Laura Soriano and her husband, Chief Tashka Yawanawa, will be recounting the powerful story of how their tribal community rebounded from near extinction during a talk at the TEDWomen 2016 conference in San Francisco on Thursday, October 27, at 11 am PDT.

“We have had a vision, a dream for our people,” said Laura, “to work for the rights of indigenous peoples to be self-sustainable by securing their land rights, strengthening and recovering their culture, and living comfortably in the rainforest by developing sustainable economic projects.”

The Yawanawa’s journey back from the brink has been guided by the “Yawanawa Life Plan,” created in the past year by the community with the support of Forest Trends’ Communities Initiative ,the IKEA Foundation and Fundo Vale. According to Beto Borges, Director of the Communities Initiative, “the plan is a social, cultural, and economic road map for safeguarding the tribe’s forest territory – fighting climate change in the process – creating new economic and cultural opportunities for their people, and empowering women, the young, and the elders of their community. In addition to our direct support to the Yawanawa for several years, we believe that our partnership can be a model for good stewardship of indigenous lands globally.”

The plan and its underlying vision has quickly made a difference in lives throughout the community, according to Laura Soriano. It has helped improve local access to traditional health care by supporting a project to establish medicinal plant gardens in each of the Yawanawa villages. After decades of seeing their indigenous heritage as a stigma, young people are now regaining pride in Yawanawa traditions and identity, participating in traditional ceremonies in new community centers built in each village.

And whereas women once had virtually no voice in the community, now eight Yawanawa women have earned university degrees; the first woman to do so is now a key community organizer and member of the Yawanawa Council. More recently, with the support of the IKEA Foundation, Forest Trends’ Communities Initiative provided seed funding for a new partnership between Yawanawa women artisans with the socially conscious e-commerce platform TUCUM – a sort of Etsy for indigenous handmade goods – allowing them to hone their entrepreneurial skills and reach markets beyond the Amazon. The Communities Initiative is also now collaborating with the Artisan Alliance to bring further support to the Yawanawa and other indigenous’ communities in the Amazon, helping them reach global markets for their art and handicraft products.

“We dreamed new dreams for the Yawanawa community,” said Laura. “And by making changes we created new paths that will become the traditions that our young people will now inherit.”

The support of the Yawanawa illustrates what’s at the heart of the work of Forest Trends’ Communities Initiative: partnering with indigenous and traditional communities in their efforts to secure their rights, conserve their forests, and improve their livelihoods and territorial governance. These communities play a key role in the global challenge of fighting climate change by saving some of the world’s most critical remaining forests from destruction.

Will Tucker is the Senior Communications Associate at Forest Trends. He is a writer with a background in climate change communication, history, and public health.