The voluntary carbon market has spawned more than twenty offset standards over the past year – enough to keep even the most diligent market participants feeling a bit overwhelmed. WWF has responded with a 105-page guide to the ten standards that have been around the longest, and the Ecosystem Marketplace takes stock of their efforts. 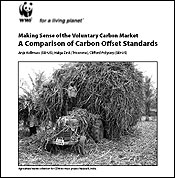 The voluntary carbon market has spawned more than twenty offset standards over the past year – enough to keep even the most diligent market participants feeling a bit overwhelmed. WWF has responded with a 105-page guide to the ten standards that have been around the longest, and the Ecosystem Marketplace takes stock of their efforts.

13 March 2008 | Anyone struggling to keep up with the slew of new carbon offset standards proliferating across the voluntary world will find it worth their while to download the WWF’s recently-released 105-page brochure Making Sense of the Voluntary Carbon Market: A Comparison of Carbon Offset Standards (pdf). It’s a clearly-written document that delivers on its promise of comparing voluntary standards – and although it doesn’t necessarily “make sense” of the voluntary market, it does provide a good primer for beginners and an adequate refresher for veterans.

As the title implies, the meat of the document is its analysis and comparison of ten voluntary standards currently in existence – a difficult task, because each standard has different objectives. The three authors (Anja Kollmuss and Clifford Polycarp of the Stockholm Environment Institute and Helge Zink of Tricorona) deal with this by using the Kyoto Protocol’s Clean Development Mechanism (CDM) as the benchmark standard against which the voluntary standards are measured – an iffy premise, as critics of the CDM can attest, and as the authors themselves make quite clear.

The authors have also bent over backwards in their efforts to remain objective – despite WWF’s own involvement in and vocal support of the Gold Standard.

“The report itself needed to be as neutral as possible, and having a credible, neutral report was in WWF’s own interest,” says Kollmuss. “If WWF wanted to publish an advocacy piece, they could have done it in-house.”

The authors do leave room for their own subjective analysis – which they clearly label and delineate from the objective treatment that comprises the bulk of the document.

“I found the whole field is so complex that you can’t really make simplistic conclusions,” says Kollmuss. “There is no way to come up with a perfect standard because the way you define perfect depends on what your goal is—at the same time I wanted a space where I could write my opinions but wanted to make sure readers knew they were our opinions.”

They also chose not to wade directly into the sticky territory of direct comparisons until providing a simple but dense summary of the CDM itself, and the result is an introductory section that serves as a tremendous aid if you understand the basics but aren’t clear on, say, the interplay between voluntary and compliance markets, or how exactly a project is designed and implemented, or when to call an offset a credit, and visa-versa.

The basic information on standards is woven into the narrative of the first half of the document itself – so, before giving you a chapter on each standard, they deliver chapters on concepts like “Additionality and Baseline Methodologies”, and then, within this, sub-chapters on “Additionality Requirements for Each Standard” and “Baseline Requirements for Each Standard”.

This provides a solid foundation from which to segue into a discussion of implementation procedures, and finally into the detailed analysis of each standard on its own – a section that takes up roughly half the document and wraps up with a summary matrix.

“The matrix was a little bit artificial,” says Kollmuss. “It took a long time for us to pull it together because we needed to go into quite a bit of detail to really divvy out what the differences are.”

Steve Zwick is managing editor of Ecosystem Marketplace. He can be reached at s[email protected].