To get back on track to meet global 2030 targets for forests, a new study is calling for a “bold” new public and private commitment to a floor price of $30-$50 per ton for high-integrity forest carbon credits, and accelerating upfront finance to forest countries for REDD+. A new report finds that for 2030 forest […] 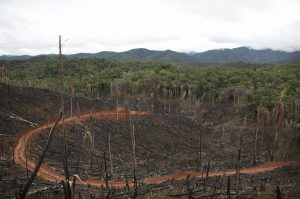 To get back on track to meet global 2030 targets for forests, a new study is calling for a “bold” new public and private commitment to a floor price of $30-$50 per ton for high-integrity forest carbon credits, and accelerating upfront finance to forest countries for REDD+.

Its authors call for a strong forest carbon price signal and more upfront finance to encourage countries to invest more in forest protection.

The COP27 climate talks, which began yesterday in Sharm El Sheikh, Egypt, are continuing last year’s talks in Glasgow, Scotland, an event marked by a slew of high-profile climate commitments from governments, companies, investors, and philanthropy.

The Glasgow Leaders’ Declaration on Forests and Land Use was one such pledge. One hundred and forty-one countries representing more than 90 percent of the Earth’s forests signed on to “halt and reverse forest loss and land degradation by 2030” while at the same time transforming rural economies and promoting sustainable development. Signatories emphasized forests’ crucial role in climate change mitigation, and the need to ratchet up ambition: at present, countries’ existing commitments to cut emissions fall 15 gigatons per year short of what’s likely needed by 2030 to limit global warming to no more than 2°C. Forests can help close that gap by an estimated four gigatons. But the window to act is closing.

“The window is closing” to meet 2030 targets for forests

The Green Gigaton Challenge coalition has proposed an interim milestone of financing commitments to deliver one gigaton of emissions reductions from forests by 2025, and another gigaton yearly after that. Meeting this milestone would keep the 2030 target within reach.

But report authors say we are still falling short. Just one-quarter of the necessary commitments have been made to date, and only half of these of these commitments have reached the stage of signed emissions reductions purchase agreements. And none of the committed funding has yet been disbursed.

“We are running out of time to achieve the urgent milestone of achieving commitments for one gigaton of emissions reductions from forests by 2025,” said Judith Walcott, Senior Safeguards Specialist at UNEP-WCMC and lead author of the new report.

“There is no Paris Agreement and no Sustainable Development Goals without forests,” said Susan Gardner, Director, Ecosystems Division, UNEP, speaking on behalf of the Green Gigaton Challenge. “As UNEP’s Emissions Gap Report reminded us once again, the window is closing and we urgently need to scale up action and finance for forest-based mitigation to achieve the 2025 one gigaton milestone and avert catastrophic climate change. If we succeed, and the new Forest and Climate Leaders Partnership is a promising sign of ambition, then vital targets for climate and nature remain within reach.”

To close the “Gigaton Gap,” report authors say “an unmistakable incentive in the form of an increased forest carbon price is needed… A bold first step, like committing to a floor price of $30-50 per ton of CO2e for a substantial volume of emissions reductions, would empower forest countries to transform their economies and catalyze further funding opportunities.”

The report also calls on the climate finance community to ensure that forest countries have “straightforward access” to upfront finance enabling them to prepare for and implement actions to reduce emissions from deforestation and degradation, which would then allow them to receive results-based payments for emissions reductions, via a mechanism known as REDD+ which is overseen by the United Nations Framework Convention on Climate Change.

“Currently, finance for forests does not reflect the urgency or the scale of the problems we are facing. Upfront investment in REDD+ readiness and implementation must continue and be scaled up to ensure capacity and action to achieve emissions reductions results, with effective measurement, verification and reporting systems and safeguards in place,” said Andre Guimaraes, Executive Director, Amazon Environmental Research Institute (IPAM).

The report finds that even if countries make it past early hurdles, few long-term, predictable options to access results-based financing exist. Authors documented at least $1.7 billion committed to pay for emissions reductions between 2020-2025 at the jurisdictional scale (Table 1). Just over half of this are Emissions Reduction Purchase Agreement (ERPAs) signed with the Forest Carbon Partnership Facility’s Carbon Fund. Another quarter of total commitments have been made through the LEAF Coalition. And commitments made in the form of either a Joint Declaration of Intent or Letter of Intent comprise the remainder. 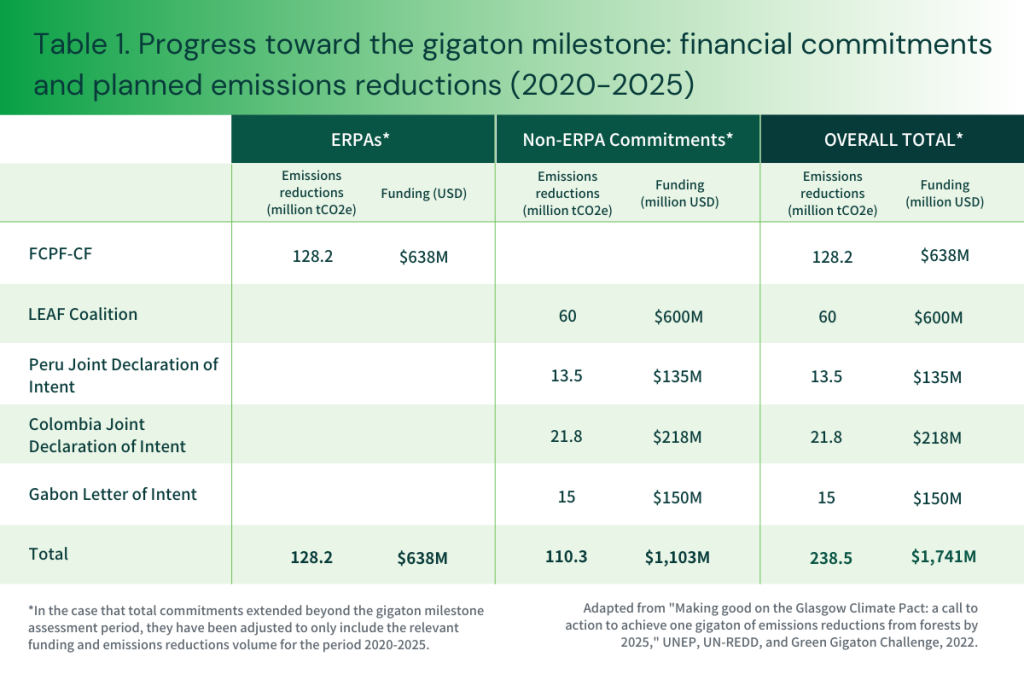 Additional upfront readiness and implementation finance could be secured not only from traditional bilateral and multilateral sources, but also through blended public-private instruments and from private financial institutions such as pension funds and philanthropic institutions, which authors say are in a better position to provide long-term financing than private sector corporations or national governments. Green bonds and debt-for-nature swaps are other possible sources of finance.

The report also notes that voluntary carbon markets will have a role to play. Ecosystem Marketplace data cited in the report show that nearly $1.7 billion in transactions for forestry and land use projects took place in 2021 in the voluntary markets, representing more than 285 million tCO2e.

“No progress without equity”

Once finance is mobilized, it will be crucial to have strong integrity mechanisms and safeguards in place to ensure that emissions reductions are achieved.

“With serious action and incentives, we can get there, but progress also hinges on equity – fair and inclusive access to funding and capacity building. This will be crucial to achieving forest-centered emissions targets,” says Walcott.

“There is no progress without equity. Indigenous peoples and local communities are on the front line, leading the way with conservation and sustainable management of forests, but their lives are often at risk. Direct access to funding at sufficient volumes should be guaranteed for indigenous peoples and local communities as true partners, and with a focus on women”, said Lola Cabnal, Asociación Ak’Tenamit.

Forests key to “flattening the curve” of decarbonization costs

Ultimately, the price per ton paid under REDD+ mechanisms isn’t high enough, according to the report. Current prices range from $5-10 per tCO­2e, which the GGC says are too low to effectively function as an incentive for forest protection when lined up against revenue flows from alternative land uses like clearing for agriculture.

They call on public and private climate funders to commit to a floor price of $30-50 per ton of CO2e.

“This commitment would incentivize investment to help overcome the barriers of achieving sustainable development alongside forest mitigation,” report authors write. “The public demand signal would also provide reassurance to private actors and catalyze their further (and scaled up) commitments to pay for emissions reductions. An attractive price of forest carbon combined with reasonable certainty of future payments would also go a long way to attracting upfront finance for REDD+.”

Such a major jump in forest carbon credit prices is still a bargain compared to alternative emissions reductions strategies.

“REDD+ can contribute trillions of dollars in value by ‘flattening the curve’ of the global economy’s costs of transition to climate stability—opening up the opportunity to achieve tighter emissions targets and to maintain total emissions consistent with a 2°C budget while keeping the global carbon price below $250/tCO2e by 2050,” writes Rupert Edwards, Senior Finance and Carbon Advisor at Forest Trends, a founding member of the GGC. “Without the higher end of REDD+ supply potential, any tightening of ambitions would lead to a quick escalation in carbon prices.”

The report and its findings will be presented on November 11, 3:30pm at the Nature Zone event “Making good on the Glasgow Climate Pact: a call to action to achieve one gigaton of emissions reductions from forests by 2025”.