The world is awakening to the desperate need to protect forests in light of the climate crisis, and Verra has been working since its inception in 2005 with leading scientists, conservationists, financiers and practitioners to establish a robust voluntary framework that enables society to value environmental benefits derived from project activities, including the protection of forests under threat through REDD. 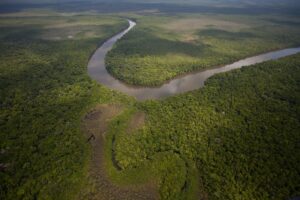 24 January 2023 | Conserving threatened forests is critical to keeping global warming below 1.5 degrees celsius, and yet efforts by governments, multilateral organizations, philanthropic institutions, and NGOs have been insufficient to slow, let alone reverse, the relentless loss of forests and biodiversity. That’s because our economic system has evolved to value timber, minerals, and agricultural commodities that come from dead forests, but not the carbon sequestration, water regulation, and other ecosystem services that living forests provide – and on which our entire civilization depends.

Fortunately, the world is awakening to the desperate need to protect forests in light of the climate crisis, and Verra has been working since its inception in 2005 with leading scientists, conservationists, financiers and practitioners to establish a robust voluntary framework that enables society to value environmental benefits derived from project activities, including the protection of forests under threat through REDD – Reducing Emissions from Deforestation and forest Degradation. Due to Verra’s work, today projects implementing activities that protect forests under threat can be certified and issued carbon credits that equate to tonnes of carbon dioxide (CO2) avoided. The sale of those carbon credits channels previously unavailable finance for forest conservation.

In short, Verra’s REDD standards enable society to measure the greenhouse gas (GHG) emissions that are avoided by ensuring that forests at risk of being cut down or burned are kept standing. By valuing standing forests, REDD gives trees a fighting chance in the face of the numerous economic drivers that would otherwise do away with them.

Certifying REDD activities is not easy, in part because one has to quantify the risk of forest loss that would occur without the carbon project (i.e., the baseline). In other words, this requires counterfactual analysis, which is a fancy term for looking at a situation and asking what would happen if things were different. This approach isn’t unique to REDD and is a cornerstone of the impact analyses that government agencies, academics and others around the world use to determine what works, what doesn’t, and how to allocate resources. Counterfactual analysis is, by its nature, impossible to confirm with 100 percent certainty, but is critical if we are to channel more resources to protecting forests as a critical means of fighting climate change.

Awarding carbon credits to REDD projects requires extreme diligence, and we take that challenge seriously. For example, we ensure wide consultation on the most up-to-date science and best practices, as well as a thorough understanding of the available tools to measure forest loss and gain. This has been Verra’s guiding approach since we embarked on this journey, and continues to this day.

Unfortunately, in the last week The Guardian and Die Zeit, working in tandem with the privately-funded “investigative non-profit” SourceMaterial, published sensationalist articles using outlandish claims about the value of the REDD credits we have issued based on simplistic extrapolations of research that uses old, outlier statistical models. These are academically interesting exercises, but they would never pass muster as bona fide carbon crediting methodologies.

The approach underpinning these studies is problematic on several fronts. For one, the studies apply an overly simplistic tool to create their own counterfactuals, essentially ignoring the unique circumstances affecting each one of the projects – and which are critical to understanding the various drivers of deforestation and how they vary across landscapes. Another major limitation is that the data sets used are not appropriate for the task at hand. The studies rely on Global Forest Watch (GFW) data, which is a fantastic tool to identify the occurrence of deforestation across the world and identify hotspots, but has multiple limitations that have been recognized by GFW itself and others. For this reason, several studies have concluded and explicitly stated that this data should not be used off-the-shelf to estimate deforestation or for REDD purposes, although they may be used if suitable adjustments are made first. We are preparing our own analysis of the studies and will post that shortly.

Not all scientists agree, of course, but we do strongly believe that one-sided reporting, with an exclusive focus on a few cherry-picked studies, does not do justice to the realities on the ground and the wide range of opinions on this topic – including those of scientists who recognize that these projects are collectively protecting forests under threat and therefore keeping massive amounts of carbon emissions out of the atmosphere. Experts from many other organizations, including Everland and Sylvera have also chimed in to point out inadequacies in the scientific research supposedly supporting the journalist’s claims.

CONSTANT IMPROVEMENT IS VITAL FOR REDD

Verra pioneered the crediting of REDD projects, but we didn’t develop our program alone. We built it by relying on decades of research and experimentation by hundreds of scientists, economists, policy makers, and conservationists, and then convening multiple rounds of focused review and public consultation to develop program requirements and accounting methodologies for calculating the emissions that were avoided or reduced by keeping forests standing. We are very proud of that work and stand behind the emission reductions that have been achieved to date – each and every one of them followed the best-available science of the day and met the requirements we set out.

At the same time, we recognize that science advances, practices improve, and systems change, which is why all of our program requirements and methodologies are periodically reviewed to ensure they remain valid in the face of change. It’s also why we require all projects using older versions of the standard and methodologies to transition to the new and updated requirements. This mandatory aspect of our program requirements is essential as it embeds the underlying concept of continuous improvement.

While we have continuously updated our program requirements (e.g., we are currently on version 4.4 of the VCS Standard), we began the effort to update our REDD+ methodologies several years ago. We are in the final stages of that work, and there are four major components to it.

REDD projects are not some abstract concept on a piece of paper; they represent real projects on the ground that deliver life-affirming benefits to communities and individuals in the form of agricultural training, education, and health care – while at the same time protecting forest carbon stocks and preserving critical biodiversity and water resources, to name a few additional benefits. In addition, REDD projects are, for the most part, located in the global south, which means that these benefits accrue to communities who tend to have few real development options. For them, REDD is a lifeline.

The stark reality is that huge swaths of the world’s forests are at risk, primarily because there are no real ways of assigning an economic value to them. If we are going to protect the world’s forests, we need an alternative to “business as usual”, where they get chopped down or burned for short-term economic gain. An effective and appropriately funded REDD+ mechanism means that day-to-day decisions about forests have another dimension to them – and it means they stand a far better chance of being conserved.

Furthermore, let’s not forget about the positive leakage that most REDD projects generate. For example, many projects work with governments to reduce illegal logging and mining across the landscape, secure land tenure for local communities to foster sustainable land use, introduce new agricultural production practices that reduce the need for slash-and-burn farming, and/or develop new markets for non-timber forest products. All these activities and many others result in positive spillover effects beyond the project boundary and generate meaningful, often very significant, additional carbon benefits, none of which is ever credited.

The voluntary carbon market is at an inflection point, and it can be a crucial element in the fight against climate change provided it can help companies meet aggressive Net Zero targets while also enabling investment in both emission reduction and removal projects. Specifically, it needs to make sure companies follow the mitigation hierarchy on their way to Net Zero, and that claims around the use of carbon credits are accurate (e.g., Voluntary Carbon Market Integrity Initiative, VCMI). In addition, it needs to make sure that the carbon credits sold in the market are achieving real emission reductions (or removals), which represents the important work of the Integrity Council for Voluntary Carbon Markets (ICVCM).

Today, we at Verra have issued over one billion carbon credits, which have channeled billions of dollars into climate action and helped forest communities thrive. For some, awarding credits based on a counterfactual scenario is too imprecise. However, there is simply no other approach if we are going to channel much-needed finance to protect forests under threat. Instead of waiting for imagined states of perfection, we have chosen to move forward with supporting forest protection projects around the world using these methods, which are constantly under review and continuous improvement. The urgency of the climate and biodiversity crises is too great to ignore this vital tool.

David Antonioli serves as Chief Executive Officer of Verra where he oversees all aspects of the organization, including ensuring the financial and operational health of the organization and that the organization’s certification programs meet high-quality integrity and transparency standards. David works to ensure that the standards Verra identifies, develops, and manages can be used by the private sector, countries, and civil society to achieve increasingly ambitious climate and sustainable development goals.