The US state of California has slashed greenhouse-gas emissions while powering one of North America’s strongest economies, largely by embracing a system of “cap-and-trade”. As the state expands its program, policymakers are considering a provision to slow climate change by saving endangered forests – a move that could help indigenous people across the Amazon and around the world. 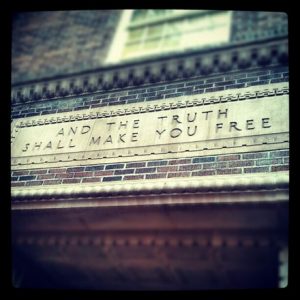 As California policymakers weigh their options for expanding cap-and-trade, the Earth Innovation Institute has compiled a fact sheet that answers some of the more complex questions. We’ve reprinted it below.

What is California’s Cap-and-Trade Program?

In 2006, California passed The Global Warming Solutions Act (AB 32) – a groundbreaking law, requiring statewide emissions in California to be reduced to 1990 levels by 2020. California’s Cap-and-Trade System is one of the primary policies implemented to achieve this target. The Cap-and-Trade program sets a firm statewide emissions limit that declines at roughly 3% annually from now until 2020. Cap-andtrade currently regulates a broad range of Green House Gas (GHG) sources (approximately 350 businesses) including cement production factories, oil and gas production facilities, glass manufacturing factories, electricity generation sources and much more – any source that emits more than 25 thousand metric tonnes of CO2 annually must comply with the program. Regulated companies must purchase a permit, or an “allowance” from the government for each metric ton of CO2 they release in order to comply with the program. The number of permits, or allowances, are restricted (or capped, hence the name “cap”) and decline each year with the statewide emissions limit. Regulated companies are allowed to trade carbon allowances (hence the name “trade”), providing incentives for regulated companies to come in under their allowance and sell their remaining allowances, as well as permitting companies to purchase allowances as needed. The underlying logic of cap-and-trade is the less companies emit, the less they pay.

Alternatively, companies may substitute a very small portion of their allowances with “offsets”. Offsets are reductions in emissions outside of the regulated sector to meet the companies’ legal obligation to reduce their emissions. For example, by managing forests on their tribal lands in Northern California, the Yurok tribe was issued over 800,000 carbon offset credits, each representing one metric ton of carbon sequestered by their forests. These credits were then bought by regulated companies in California to meet their compliance obligation. Currently, California only permits the use of offset credits generated from domestic sources and these credits are subject to rigorous third-party verification. However,

The proposed International Sector-based Offset Program (described below) would allow regulated companies to purchase a limited amount of offsets from outside of the United States, potentially broadening the impact of the Global Warming Solutions Act by spurring emission reductions outside of California. Public discussions have now officially been opened by California’s Air Resource Board (CARB) to examine the specific rules and requirements to allow sector-based offsets in California’s carbon market (i.e. determining reference levels and crediting baselines, defining robust social safeguards, and ensuring rigorous monitoring reporting and verification systems are in place).

What is the International Sector-based Offsets Program?

California’s proposed International Sector-based Offsets Program allows regulated companies to purchase “sector-based” offsets from tropical regions that are reducing emissions from deforestation and forest degradation. This provision compensates tropical jurisdictions for reducing emissions across entire agriculture and forestry sectors, rather than at smaller project based levels.

Currently, the state of California has signed a MOU with the states of Acre, Brazil and Chiapas, Mexico to explore opportunities to link tropical forest regions with California’s Cap and Trade Program.

If successful, this linkage will not only inject a much needed source of finance for large-scale programs that are reducing deforestation, but also send a powerful signal to tropical forest regions around the world that their programs to reduce deforestation are valued internationally.

No, Cap-and-Trade programs are designed to provide incentives for regulated companies to improve the production systems and reduce emissions. Each year hard limits are set on pollution, and each year stricter limits are enforced.

California’s Cap-and-Trade Program is just one of AB 32’s many policies that work towards reducing emissions and improving air quality. Cap-and-trade is only estimated to achieve 29% of the emission reductions needed to reach AB 32’s 2020 target; most of the emissions reductions will be coming from additional regulations and innovations in the energy and transportation sectors. In addition, to ensure the majority of GHG reductions are made directly by regulated companies, only a fraction of total credits used are allowed to come from offsets (8%), and if enacted, an even smaller fraction can be met with international sector-based offsets (2-4%). While this may be a small part of the changes happening to reduce pollution in CA, international forestry offsets could bring much needed finance to tropical forest regions.

Some projects have been developed using the name “REDD (Reducing Emissions from Deforestation and Forest Degradation)” that have not been good for indigenous and campesino communities. How is California’s International Sector-based Offset program different?

First of all, California’s International Sector-based Offsets program will only support comprehensive jurisdiction-wide programs to reduce deforestation and will not consider individual tropical forest offset projects that may be developed without clear safeguards or sound intentions.

Secondly, California’s International Sector-based Offset program has developed robust social and environmental safeguards. These safeguards are informed by years of consultations with local decision-makers, including leaders of indigenous and traditional communities, governments and civil society led by the REDD Offsets Working Group (ROW), a scientific advisory panel created to advise California’s Capand-Trade program. As a result of these consultations, the ROW recommended that California’s Air Resource Board only link with jurisdictions that follow best practice global standards for social and environmental safeguards in accordance with the UNFCCC Cancun Agreement – ensuring that emission reductions are only achieved while protecting and enhancing the rights and interests of local forest dependent communities and indigenous groups; and that adequate mechanisms are developed to diligently report and resolve any grievances that may arise.

We live far away from California, and we aren’t part of the states that have signed a MOU with California. Why should we care?

If California succeeds in leading the way to compensate tropical forest regions and traditional forest stewards for climate change mitigation, other states and nations may soon follow.

California is often on the cutting-edge; it’s the birthplace of Silicon Valley and the iPhone and the nation’s most progressive environmental and social policies, including the strictest regulations on air pollution in the US and one of few states that offers parental leave. What happens in this pioneering state often influences policies in other states and at the national level. So while only two tropical forest jurisdictions are poised to receive offsets from CA in the near term, the trickle-up effect of California’s policies could have much more widespread influence, catalyzing other states and nations to follow California’s lead.

The dialogue to implement international forestry offsets in California’s cap-and-trade program has now officially been opened by California’s Air Resource Board – marking a pivotal moment in the regulatory process. A critical workshop to hear commentary about the program and contribute to design is April 28th, when safeguards will be discussed. This is a strategic opportunity for groups to demonstrate broad support for California’s international forestry offsets program and increase the visibility of this moment, not just for California and potential partners in Acre and Chiapas, but for those states, provinces and territories who are conserving forests but seeing very few benefits to date.

The state of California needs to hear your voice of support for its International Sector-based Offsets Program.

California’s International Sector-based Offsets Program will support reductions in emissions across entire jurisdictions. What does the jurisdictional approach to reducing emissions from deforestation and degradation mean exactly?

The jurisdictional approach to reducing emissions from deforestation and forest degradation is characterized by:

How does the jurisdictional approach to reducing emissions from deforestation and degradation differ from a project approach?

Simply put, the jurisdictional approach aims to scale-up emissions reductions and distribute the benefits from jurisdiction-wide emissions reductions across multiple land users within that landscape. Under this approach, indigenous peoples and other forest-dependent communities may be recognized for historical and current forest conservation efforts without being penalized as “low performers” from the conventional perspective of earning “avoided deforestation/emissions” credits used by many REDD+ and Payments for Environmental Services schemes. We compare the two approaches in the diagrams below, in which the green polygon represents an entire jurisdiction with different sectors with the potential to contribute to jurisdiction-wide reductions in emissions represented, including communities (inclusive of indigenous, traditional and smallholder communities) and farms. 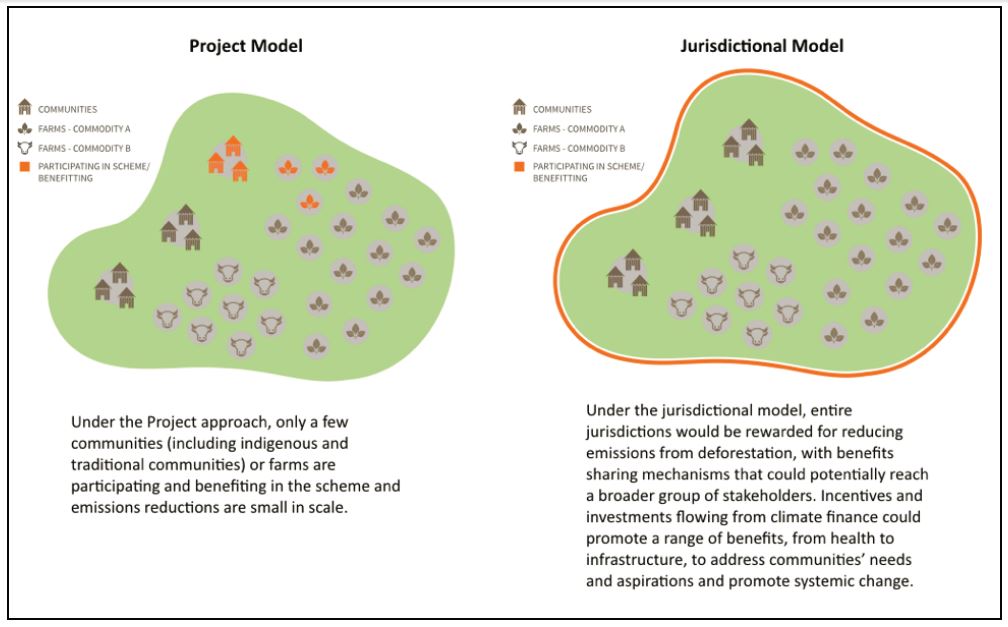 How does the jurisdictional approach to reducing emissions work in practice?

Acre, Brazil is the world’s reference for jurisdictional REDD+ and can help us understand how Jurisdictional REDD works in practice. There, 70% of International REDD funds received are destined to communities as incentives for forest conservation to support their livelihoods and life plans, either through support for statewide programs, such as subsidies for rubber tappers or the Indigenous Agroforestry Agent program described below, or as direct incentives to communities.

For example, approximately 1.5 million USD have been allocated to Indigenous programs within the state system of incentives for environmental services (SISA). Almost 1 million USD has gone to a program for Indigenous Agroforestry Agents who work within their communities to develop and renew indigenous land-use practices that have been taken over by cattle ranching. Another 500,000 USD have been channeled to directly communities to support their life plans-ranging from improving territorial management and planning to supporting community associations. In addition, more than two million USD has been used to support traditional communities who depend on rubber tapping.

Acre’s SISA program demonstrates that jurisdictional approach goes above and beyond ecosystem services and generating carbon credits, to improve livelihoods and support a statewide transition to low-emission development.