Businessmen often seek to maximize their earnings by harvesting several income streams from one asset – a strategy that only works if end-users see value in the multitude of products coming at them from one source.  Some US states say restored wetlands generate extra value, if they also reduce run-off into local waterways, but environmentalists say awarding extra credits for that amounts to double-dipping at the cost of the environment.  The two sides are colliding this week in North Carolina. 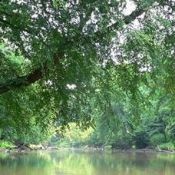 16 November 2009 | In North Carolina’s Neuse River Basin, where stunning vistas of overhanging birch branches and sandstone bluffs compete with a river tainted by polluted runoff, two titans of the mitigation banking industry wage a battle for the conscience, credibility – and cash – of the emerging mitigation banking business.

Call it the Battle of the Georges – George Kelly, that is, founder of Environmental Banc and Exchange, or EBX, and current president of the National Mitigation Banking Association; and George Howard, former director of the association and co-founder and president of Restoration Systems.

It is here that EBX’s Neu-Con mitigation bank sparked a battle over whether restored streams and wetlands can be used – and then used again – to compensate for multiple environmental damages.

And it is here that these normally genially men with their soft southern accents aimed their weapons: state vs. federal jurisdiction, wetland vs. nutrient banking and rules vs. reason. They lined up their allies: government officials, environmentalists, and fellow mitigation bankers.

And they are taking no prisoners.

“They’re doing everything in their power to kill our bank,” George Kelly said.

The Battle of the Georges hints at major environmental market clashes ahead. It is a battle not so much of personalities but of ideas that is playing out across the globe. And it is made particularly problematic as valid environmental arguments are posited by competing sides.

The argument in North Carolina centers on selling wetland credits in two different markets: wetland and nutrient banking. Environmentalists call reselling the same asset, in this case a restored wetland, “double dipping” and see it as a net loss for the environment – arguing that reduced runoff is an embedded benefit of a restored wetland, and not an extra.

This “results in re-crediting of the same nutrient-removal function already allotted and… a net degradation of water quality,” said environmentalist and Upper Neuse Riverkeeper Alissa Bierma.

But environmental bankers often call this “stacking” and say “bring it on” – arguing that, if done right, the practice makes it especially worthwhile for bankers to rescue or restore the most environmentally valuable properties.

Détente, at least for now, appears only in the distance.

“The struggle to come to a consensus on (and even an understanding of) how to bundle/stack environmental asset credits is playing across the nation and the globe,” says Nathaniel Carroll, director of EM’s biodiversity program. “There are many variables that influence the perceived fairness, and compelling arguments on both sides. So far, solutions seem to be circumstantial and not universal, but as the rubber meets the road more and more, as it is in North Carolina, we’ll see a rough approach hashed out.”

Tangled and competing state and federal regulations aimed at restoring and preserving streams and wetlands and minimizing damage from polluted runoff made this battle inevitable, some say.

Staging the battle in North Carolina was also virtually inevitable because many states support federally sanctioned wetland banking, but North Carolina is one of only a handful of states that spur developers to pay mitigation banks to compensate for nutrient runoff, a relatively new practice that blends water-quality trading and wetland mitigation banking.

Here, mitigation bankers, such as Restoration Systems and EBX, restore wetlands, streams, and other ecosystems that restrain erosion, prevent floods, and filter pollutants, then “bank” that acreage to sell to developers as mitigation credits – federal wetland credits or state nutrient offset credits – to meet requirements that they offset projects that adversely impact the environment elsewhere.

The Days of Détente

Back in 1999, before this battle began, EBX began restoring wetlands, streams, and buffers in seven different sites and watersheds along the Neuse River to create its Neu-Con Umbrella Wetland Mitigation and Stream Restoration Bank. The North Carolina Department of Transportation bought wetland mitigation credits in this bank in 2002 to meet federal Clean Water Act regulations that require mitigation for the streams and wetlands that would be impacted by the state’s new highways. The federal Army Corps of Engineers that oversees wetland mitigation transactions gave its blessing.

From EBX’s perspective, this was a smart business move, says Kelly of EBX. “Knowing the rules of the game,” he said, “put us at an advantage.”

EBX learned those rules, Kelly said, by hiring a former North Carolina Department of Water Quality employee, Todd St. John, as consultant. He clued EBX in on a then little-known state provision that allowed Neu-Con Mitigation Bank to sell nutrient credits where it had already sold wetland credits.

This put Restoration Systems’ banks that sell credit for their work only once on an unlevel playing field, Howard said. Take, for example, he said, his company’s Wellons Farm Bank. Completed in the Neuse River Basin in May 2008, Howard characterizes it as the first major bank devoted exclusively to nutrient trading. Restoration Systems poured millions of dollars into restoring this 33-acre former pasture. By eliminating livestock grazing, agricultural production, and fertilization, they stopped and intercepted nitrogen, phosphorus, and fecal coliform before it entered the Swift Creek and Neuse River. When they sell out credits, they will retire the bank and sell no more credits from it.

So far, they’ve sold credits as compensation to organizations as diverse as church parking lots and strip clubs, Howard said. But sales at $25 per credit got bogged down when EBX, which already recouped its expenses through its 2002 deal with the Department of Transportation, undercut Restoration System’s price.

Calling in the Troops

At first glance, Howard looks like David battling Goliath. He not only took on his competitor, the current president of the National Mitigation Banking Association, but he took on his business’ top regulating body, the State Department of Water Quality that permitted EBX’s sales.

But those who know Howard know him as a scrappy and formidable fighter with a track record of pulling together power. He counts as friends Newt Gingrich and both George Bushes and served as Special Assistant to Senator Jesse Helms. Drawing on his background, he pulled together an army of attorneys, fellow mitigation bankers, and environmentalists for the current fight.

He pulled in Steven Levitas, Esq., of Kilpatrick Stockton, LLP. Levitas complained to Coleen Sullins, Director of the North Carolina Department of Environment and Natural Resources, and demanded a policy reversal.

He pulled in John Hutton, senior project manager for Wildlands Engineering, Inc., another North Carolina-based mitigation banking enterprise that is creating its own nutrient bank. Hutton offered his support and his company’s backing.

Dissatisfied with Freeman’s response, Bierma and Baldwin called in the big guns. In October they and two additional Riverkeepers wrote Monte Matthews of the United States Army Corps of Engineers. They asked the federal agency to “evaluate and approve projects within the State…in a way that ensures Federal laws are not subverted by short-sighted and poorly designed State policies.”

Matt Mathews, the division’s surface water protector section chief told Ecosystem Marketplace last week that it scheduled a meeting on December 9 with various stakeholder including environmentalists, enforcement agencies, and mitigation bankers. While their final decision on whether a single mitigation bank credit can be used to compensate for multiple impacts will consider the stakeholders’ input, the division already wrote a draft decision, Mathews said. It prohibits future sale of wetland and nutrient credits from a single space.

The fury behind this conflict cuts far deeper than business for a single mitigation bank. So do its implications. Wetland banks throughout the country, for example, are considering also selling carbon sequestration credits when the United States approves carbon trading. The conflict’s conclusions could determine the legitimacy of stacking environmental credits and the future of the mitigation banking industry.

“There are many areas where stacking may be applicable and other areas where stacking would be inappropriate, “says Carl Lucero, spokesperson for the USDA’s Office of Ecosystem Markets and Services, which is tasked with developing universal guidelines and a registry to measure ecosystem service benefits. “As we begin this discussion, we must strive to account for all the benefits of a particular resource or we risk undervaluing it.”

Moreover, the dispute shines a light on the need for stronger science-based models and tools that measure the impact of ecological restoration activities vis-í -vis actual improvement in ecosystem services, as EM Water Manager Tracy Stanton and others highlighted in a letter to the editor of Science submitted earlier this year.

Kelly, for his part, said he plans to bring up the issue at the next Mitigation Banking conference. Environmental markets are new, he said, and new markets inevitably cause a fair bit of confusion.

Alice Kenny is a prize-winning science writer and a regular contributor to Ecosystem Marketplace. She may be reached at [email protected].