The National Mitigation Banking Association (NMBA) is holding its annual meeting in New Orleans this week, and we’ll be video blogging from the event. Whether you’re joining us in the Crescent City or following us online, here are some of the issues we’ll be covering. 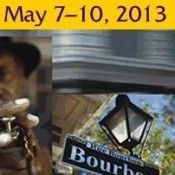 The National Mitigation Banking Association (NMBA) is holding its annual meeting in New Orleans this week, and we’ll be video blogging from the event. Whether you’re joining us in the Crescent City or following us online, here are some of the issues we’ll be covering.

6 May 2013 | NEW ORLEANS | USA | The National Mitigation & Ecosystem Banking Conference is the country’s biggest gathering of market movers in the wetland & stream mitigation and species & habitat banking worlds. It kicks off here on Tuesday and runs through Friday, and we’ll be covering the conference all week here at Ecosystem Marketplace, on our blog and via Twitter so be sure to check back with us often.

Here’s a quick look at the top five issues that we expect to be following:

While not technically part of the conservation banking world (which covers federally listed species only),“ Candidate Species” like the Prairie Chicken, Sage Grouse and eastern range of the Gopher Tortoise, and how to protect them, continue to dominate credit trading’s legal and ecological debates.

But what are modern market-based solutions like credit trading for, if we can’t put them to the test against some of our toughest conservation quandaries? We predict that one highlight of the conference will be tracking the debate and developments around candidate conservation banking, and we’ll be watching closely to see new and old perspectives emerge.

Then there’s the Fish and Wildlife Services’ (FWS) Advanced Notice of Proposed Rule Making (ANPR), which was news at last years’ conference: addressing the need to improve landowner incentives and options for voluntary conservation of Candidate Species. A year on, submissions have closed and many Candidate Species have either been decided upon or inched closer to their pending decisions – and with FWS having released a five-year plan in February to address its massive backlog of species awaiting listing determinations, decisions are on the horizon for many more Candidates. We’ll be watching to see what, if anything, has resulted from the ANPR and how those in Conservation Banking are viewing it.

In the (Gulf Coast) Neighborhood

It’s not just coincidence that the conference is in New Orleans this year, as there are a few other reasons to keep an eye on this region when it comes to mitigation news–a big one being the 2012 Gulf Coast Master Plan released early last year, promising $50 million in projects over 50 years, to restore over 1,880 square miles of Louisiana coastline. Then in July of 2012, the RESTORE Act directed potentially billions of dollars from the BP Oil Spill fine monies to restoration projects for the economy and the environment.

Mitigation bankers are keen to discuss how their ready-and-waiting restoration efforts could come into this framework, and we’ll be looking this year for new ideas and progress on making this happen. George Howard put forward his full delivery mitigation model to this end last year, and there are many keen to see what opportunities these developments in the Gulf Coast mean for mitigation banking in 2013, and the years ahead: look out for Opening Plenary Speaker Garrett Graves, Chair of the Coastal Protection and Restoration Authority of Louisiana, and a whole session on Thursday May 9th for Banking in The Gulf Coast Region.

Bringing in the Bacon

Quite a few sessions at this year’s conference concern pushing the boundaries of finance for mitigation and conservation banking beyond the usual cast of characters. Let’s face it: real estate development’s not what it used to be. But what about BP, pension plans, or the carbon markets?

We’ve already mentioned the conversation over what role banks might play in restoring the Gulf Coast post-oil spill, an effort bankrolled by BP fines and the Gulf Coast Master Plan.

Mitigation banking also seems like it could be poised to break into the world of institutional capital, which has traditionally shied away from due to the localized nature of markets and lack of reliable information. We’re intrigued by recent successes in attracting private equity capital for developing mitigation banks and looking forward to Adam Davis’ presentation Thursday afternoon for his take on prospects for bankers.

We’ve also got our eye on potential links with other environmental markets. We know, we know – all that talk in recent years on stacking and bundling hasn’t translated yet into much action. But we’re still looking forward to hearing about a new wetland carbon pilot project happening in Louisiana and opportunities for synergies with nutrient credit markets and other watershed investment mechanisms.

And what about tying wetland and biodiversity markets to all the corporate ecosystem valuation going on in the business world these days? A voluntary market like the one we see in the carbon space seems like a long shot at present, but it seems to us that the person who convinces companies to leave offsetting to the experts could tap a whole new stream of financing. Becca Madsen of EPRI will tackle that subject in the same Thursday session as Davis, and we’ll definitely be there.

Transparency and reliable information – fundamental to any effective market – around mitigation and conservation banking has decidedly improved by leaps and bounds in recent years.

In particular, RIBITS (the Army Corps of Engineers’ “Regulatory In lieu fee and Bank Information Tracking System”) has made huge stridesas far as providing a centralized database on bank activity, but delays in uploading data persist, and RIBITS still doesn’t track permittee-responsible mitigation (which comprises the majority of mitigation activities).

To add to that, uncertainties around implementation of the 2008 rule (more on that below), the need for better clarity around service area definitions (regulations call for a watershed approach,a concept that’s unevenly enforced – and also a major item on the conference agenda), and sometimes-opaque approval processes can all slow down conservation actions and put up hurdles to new market entrants. Not to mention that lack of access to data can hinder valuable evaluations of performance.

In other words, transparency is still a big deal.

And Finally: You Know You’re at the NMBA Conference When….

Stop us if this is starting to sound familiar: we’ll be watching to see this year’s comments and progress on the enforcement of the 2008 Mitigation Rule.

In recent years the consistency of enforcement of preference (be it soft or hard) for mitigation banking over other forms of mitigation has been a source of…consternation in the banking industry. And as the number of states in which mitigation banking is now occurring, new areas can still struggle to ensure that the basic premise of mitigating for damage to 404 wetlands is followed through.

That’s why Friday morning’s Regulatory and Legislative Update is consistently one of the most well attended sessions every year, even if the City of New Orleans might make the 7:30am Plenary extra tough for some this time around.

It’s testament to how important this Enforcement and Regulation topic continues to be. We’ll be looking to see how last year’s debates have evolved, and for emerging questions for 2013 and beyond. Or maybe we’ll just find further confirmation that this subject is the “death and taxes” equivalent for those that follow mitigation banking in the USA.

These are just a few of the many topics that will be on the minds of conference-goers this week as they pour in from around the country and around the world. And whether you’re following from afar or just can’t make it to all the sessions you’d like (we’ve heard a thing or two about those Hurricanes they serve over on Bourbon Street), Ecosystem Marketplace will be there so you don’t miss a beat.

Bookmark this page for continuing coverage.