The Canadian province of Alberta is chopping up its countryside to extract valuable oilsands, and its longstanding wetland policy of “no net loss” means that oil companies should be offsetting the damage by restoring wetlands across the province.  That policy, however, only applies to populated areas — leaving most of the province’s territory unprotected. 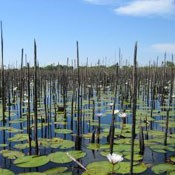 The Canadian province of Alberta is chopping up its countryside to extract valuable oilsands, and its longstanding wetland policy of “no net loss” means that oil companies should be offsetting the damage by restoring wetlands across the province.   That policy, however, only applies to populated areas — leaving most of the province’s territory unprotected.

18 April 2011 | “Wetlands are some of the world’s most important ecosystems by virtue of their diverse functions,” says the Water Policy website of the Canadian province of Alberta, a state that has had an interim policy emphasizing ‘no net-loss’ since 1993.

But recent events make it clear that the government still emphasizes tangible money over the intangible – but economically valuable – ecosystem services that wetlands provide.

When the development of oil sands expanded, the government decided to re-evaluate its policy and determined that it had one important distinction that made it pretty much un-enforceable when it came to oil sand development.   The interim policy only applied to settled areas, or the ‘White’ zone, not to the vast amount of Crown (public) lands in Alberta which account for approximately 60% of the province, or the ‘Green’ zone.

(By the way: there will be no protection of ‘Green’ zone wetlands until new regulations come out—projected to be 2011 or 2012.   Well, actually there will not be much after that either.   Read on.)

In 2008, the team submitted its recommendations to the Board of Directors of the Alberta Water Council.   Just like the policy website, the recommendations point out the benefits that wetlands provide.

In addition, the recommendations highlight the necessity of a wetland policy: “The scale of wetland loss across Alberta is only partially understood, but is estimated to be significant, with 64 per cent of wetlands lost to date in the White Area, and current annual loss estimated at between 0.3 per cent and 0.5 per cent of remaining wetland area.   The scale of wetland loss or impacts in the Green Area is unknown, but has likely increased due to development.”

The recommendations included a policy of no-net loss and Wetland Mitigation Decision Framework which went from avoidance to compensation.

At that point, environmentalists probably breathed a sigh of relief.   But that didn’t last very long.   Following the release of the recommendations, team members were given until September to gain approval from their sector.

Of the 20 sectors, 2 submitted letters of non-consensus.   These dissenters represent economic interest in the development of the vast oil sands resources.   Both opposed the policy of ‘no-net loss,’ arguing for more flexibility; they claimed that a strict policy would cost billions and inhibit economic development.

The letters, both dated in 30 July 2008, pretty much suggest taking out all enforcement power from the recommendations—and include some interesting logic to back that up.   Both non-consensus letters, one each from the Alberta Chamber of Resources and the Canadian Association of Petroleum Producers (CAPP), ask that the wording be changed from “will” to “may” in referencing compensation “to allow flexibility and appropriate discussions to take place…”

In discussing the no-net loss, the Chamber quotes the recommendation’s figures regarding cost.   They say that in the Green Zone companies should be allowed to have a “net-loss of wetlands” because “the Green Zone has not experienced the high historic loss of wetlands and, therefore, has a higher resiliency to wetland loss…”

Where to begin with this logic… Regardless of where it occurs, wetland loss has detrimental effects on the health of the ecosystem.   Loss of wetlands is associated with a decline in water quality, flood mitigation, and more.   Economic values of wetlands reported in global TEEB report (The Economics of Ecosystems and Biodiversity) ranged from $900/ha to tens of thousands of dollars per hectare.

CAPP’s letter contains much of the Chamber’s arguments along with a few not-so-logical additions: “Not only will oil sands mining proponents be faced with the high cost of purchasing land for compensation, they will also bear the restoration and ongoing monitoring/maintenance costs for these projects.”

Then there is the icing on the logic cake.   CAPP describes how the development of oilsands mainly impacts peat lands.   Since they are impossible to restore, CAPP says they would have to be replaced with an alternative wetland restoration/creation.   And here is the kicker: since the oil companies have destroyed the irreplaceable, replacing it with unlike wetlands “undermin(es) the ecological rational for the no net loss paradigm altogether.”

Wait… lets back up a second.   What about a principle of go/no-go?   AKA: the resources that cannot be replaced should not be impacted in the first place.

Instead, CAPP is basically telling the people of Alberta that they will lose their wetlands when oil companies develop oil sands (earning billions) and that these oil companies are not going to pay for their restoration.

The Non-Governmental Organization caucus was the only member to respond to these letters (of non-consensus—though they were most likely sharing the feelings of the rest of the group:

“We are disappointed by the positions and revised approaches being advanced in the non-consensus letters…which would essentially reduce the policy to discretionary guidelines.”

And then the letter continues:   “The positions advanced by ACR and CAPP put us in a difficult position.   We made numerous compromises on fundamental issues important to our caucus.   We trust that the GOA, as the steward of the final policy, is aware that all parties have made compromises and that it would be inappropriate to re-open these issues.   Keeping with the intent of the consensus approach, we stand by our original recommendation in June that the Wetland Policy and implementation plan presented to the AWC should be advanced to the GOA for adoption and implementation.”

What they say makes sense.   It is not like the recommendations came out of nowhere; they were derived from three years of consultation and discussion, resulting in the best regulations everyone could agree on.   Of course the government is going to agree.

And they showed signs of agreement when they released a 47-page report on how the government was going to manage oil sand development in February 2009.

“When it comes to Alberta’s oil sands, we believe Canada can be a leader in finding innovative ways to ensure both economic growth and greater environmental protection,” said Treasury Board President Lloyd Snelgrove, referencing the plan.   The environmental protection part, according to the report, would include an offset program to support biodiversity, wetland and management objectives.

Then in August 2010, in response to accusations that they were not being environmentally responsible, the government announced plans to set aside 20% or more of the Alberta oil sands region for conservation.   “There will be a change in the acreage that’s under conservation,” said Alberta Sustainable Resource Development Minister Mel Knight.

But apparently that small glimmer of hope was all environmentalists were going to get.

The wetland policy, previewed in November 2010 (a full two years after the recommendations were submitted), sided with economics over the environment, allowing for a GREAT amount of flexibility when it comes to wetland mitigation.

Environment Minister Rob Renner announced a ‘wetland policy intent’ that they would not adopt a strict ‘no net loss’ goal, but instead go for a more flexible approach. The Calgary Herald reported “the province is now headed toward a system where wetlands are rated for their importance (based on factors such as location or biodiversity) and then creative penalties or exchanges can be made. It still may be that a company creates a new wetland, but it won’t happen in every case.”

The CAPP’s president David Collyer downplays industry influence on the decision: “I certainly don’t accept the view that the government has adopted industry’s recommendations.”   The provincial government expects to finalize wetlands policy in 2011 or 2012.

Not surprisingly (and with every right), environmentalists from Canada and the U.S. are not happy—and they are responding.

“The announcement further erodes public trust in government’s ability to manage oilsands impacts at a time when Albertans and the international community are seeking leadership,” says Terra Simieritsch of the Pembina Institute, a Canadian based research institution.

She adds that the government is blindly accepting the oil industries cost estimates, rather than the so-far undisputed numbers from the Alberta Wilderness Association, which say it would cost only 50 cents per barrel of oil produced from oilsands.
“At a time when 83% of Alberta’s business leaders…think that ‘Alberta’s business interests have been damaged by our global reputation on environmental stewardship,’ it’s clear that pandering to oil sands industry has economic as well as environmental repercussions,” Simieritsch concludes.

Then, in March of this year, the U.S.-based Pew Environment Group released a report that emphasizes the importance of Canada’s boreal forests not just to Canada, but to the world. It turns out that these wetlands and forests across the northern half of Canada store 197 million acres of surface fresh water AND at least 147 billion tons of carbon.

“Without prompt action, Canada may miss the opportunity to protect this global treasure,” said an international science panel in a letter to Prime Minister Stephen Harper on March 16.

The report estimates the value of climate mitigation and ecosystem services from the boreal at $700 billion annually. The oil sands industry has estimated that development of oil sands in Alberta would bring in about $11-16.5 billion/year (this includes industry investment in oil sands development and expected government revenue from income tax, royalties, corporate tax, etc).

In the report, Alberta’s oilsands get “special attention for destruction of wetlands, lowering water tables and generating contaminates that could have serious downstream impacts.”

Dr. Jeff Wells, the lead researcher on the Pew report, notes: “In the midst of a growing global water crisis, Canada has the opportunity and extraordinary responsibility to protect the globally-significant boreal and its pristine fresh water. It’s a chance that Canada, on behalf of the entire world, cannot afford to miss.”

Now, Alberta just has to wait to see what their government will do next.   Remember, the regulations are not even out yet.   Maybe we will all be surprised and the new regulations contain enforcement power for protecting wetlands.   But we’re not holding our breath.

Becca Madsen is the Biodiversity Program Manager at Ecosystem Marketplace.Ã‚Â  She can be reached at bmadsen@ecosystemmarketplace.com.

Republish Guidelines:
Please see our Reprint Guidelines for details on republishing our articles.