In the aftermath of Superstorm Sandy, New York City decided to build up its resiliency devoting funds to green infrastructure projects and coastal restoration activities. One of these initiatives is the Saw Mill Creek Mitigation Bank, which, if all goes as planned, will become New York City’s first wetland bank. To celebrate World Wetlands Day, Ecosystem Marketplace lays out the potential worth of such a project. 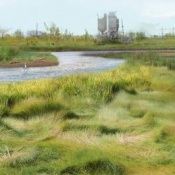 2 February 2015 | Hurricane Sandy, the historic super storm that swept over the US’ East Coast, wreaked havoc on New York City’s infrastructure and natural areas causing particular damage to a portion of Staten Island. The Saw Mill Creek Marsh is located in northwestern Staten Island and during the storm, it suffered some of the most severe flooding of any part of the city.

As today is World Wetlands Day, it’s a good time to remember the importance of wetlands like Saw Mill Creek. Wetlands act as natural filters that improve water quality and absorb high winds and rain that protect the coast. They also hold recreational value and serve as habitat for wildlife.

Lately New York City has been taking wetlands’ many values into consideration. Last year, the city’s mayor announced major investments in resiliency in the form of green infrastructure projects along with something called MARSHES, an initiative to turn the 68 acres of Saw Mill Creek into a wetland mitigation bank-one of three methods entities causing environmental damage can use to fulfill their federal compensatory mitigation requirement. Developers purchase bank credits equal to their impact countering their actions. It will be New York City’s first such bank. Current condition at Saw Mill Creek marsh in Staten Island. New York City is hoping a mitigation bank will not only rehabilitate the wetland but maintain its health in perpetuity. Image credit: NYC Economic Development Corporation.

Even before Hurricane Sandy, the wetlands were in ill health. Used as a spot for illegal dumping and choking on invasive plants, Saw Mill Creek is in bad need of rehabilitation. And the NYC Economic Development Corporation (NYCEDC), the city organization spearheading MARSHES, say a mitigation bank is the best approach to providing that restoration long-term.

Public funds will finance cleanup and reconstruction and long-term maintenance as the NYC Department of Parks and Recreation will act as stewards after the restoration phase is completed. But NYCEDC notes how the bank leverages private money through the sale of credits. Developers operating within New York City’s coastal zones will have the opportunity to offset their environmental impact at the Saw Mill Creek bank.

And then there is the major benefit that a restored and healthy marsh will greatly increase the city’s resiliency protecting residents and infrastructure alike against the next super storm.

“The MARSHES initiative will enhance capacity to handle flooding, crucial given the important role NYC’s wetlands play as a first line of defense against major storm events,” says Christopher Carroll, a spokesperson for NYCEDC. “This project will unify mitigation efforts and improve water quality, sediment quality, and the resiliency of New York City.”

Image of what a restored and viable Saw Mill Creek could look like. Image credit: NYC Economic Development Corporation.

While the bank is in its early days, the NYCEDC always intended for it to be an adaptable model that could spread throughout the city. The aim of MARSHES, the organization says, is to provide best practices alongside encouragement for future mitigation banks.

US Army Corp of Engineers, the agency responsible for compensatory wetland mitigation, received the Saw Mill Creek prospectus at the end of 2013. Right now, the project is in the permitting phase although NYCEDC plans to start cleanup this year.