The REDD financing mechanism aims to leverage private-sector funding for the conservation and sustainable management of tropical rainforests, but it won’t achieve meaningful scale unless it becomes simpler and more reliable.  Technological advancements in remote sensing and geographic information systems are now advanced enough to help. 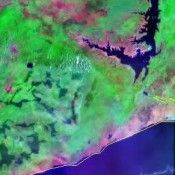 The REDD financing mechanism aims to leverage private-sector funding for the conservation and sustainable management of tropical rainforests, but it won’t achieve meaningful scale unless it becomes simpler and more reliable.   Technological advancements in remote sensing and geographic information systems are now advanced enough to help.

This article has been adapted from the In Focus report Engaging Private Sector Finance for REDD+, which was published by CINCS LLC and is available for download here.

10 October 2012 | Governments around the world have committed to reducing the 17 % of greenhouse gas emissions which arise from land use change and forestry. The result so far has been the creation of the REDD (Reduced Emissions from Deforestation and Degradation) financing mechanism, which is designed to funnel private-sector money to projects that save endangered rainforests.

But the private sector has been slow to follow suit. In the 2012 State of Voluntary Carbon Markets report, for example, Ecosystem Marketplace identified just $87 million per year in transacted REDD projects in 2010 and 2011 – and not all of that came from private-sector buyers.

This pales in comparison to the $4.5 billion that governments have pledged for 2010 through the end of this year – an average of roughly $1.5 billion per year.

More importantly, it’s nowhere near the $17 to $28 billion per year that many economists say is needed if we’re to cut deforestation rates in half by the year 2030.

This notable lack of private capital is due to the complexity and heterogeneity of forest carbon offsets, creating both supply side and demand side problems and hindering the development of a liquid, standardized market. Private investors need clarity on the probabilities of potential payoffs and an established return on investment before putting their capital at risk. In order for this to take place, there must develop much greater standardization surrounding the definition of a forest carbon offset, as well as accounting principles to handle this novel asset class. Though much effort has gone into shaping REDD+ to date, many are pessimistic due to the current disparity among different project financial structures and valuations, which remain opaque and inefficient.

We believe that the main factor hampering such development is the opaque nature of most projects developed to-date. If the market can move towards a consistent process that determines a value for forest carbon by aggregating projects and crediting data into a unified system, this can be used to cross-reference future projects at each phase of the project cycle.

Such a system needs to be geo-referenced and capable of tracking and monitoring land use change at different scales, as well as estimating and refining carbon stock estimates. In addition it must be open, transparent, auditable and accessible to all project participants, validators and governments. It should be a flexible framework at first so it can include diverse activities, crediting standards and accounting regimes, but the end goal should be the unification of existing accounting efforts into a more standardized process.

At the heart of land use carbon offsets is land itself; this necessitates using Geographic Information Systems (GIS) to track ownership and all project activities in detail. GIS can support the harmonization of baselines and leakage accounting across regions as it is able to stack data in easily-comparable layers for a given geographic area.

For a centrally-used GIS where similar information is needed by adjacent projects or activities, this data can often be adapted and re-used, making it more economical. Centering the definition of a credit around the land from which it derives also solves a host of other problems. By providing a common platform to contrast baselines and leakage scenarios with potential regional and national RELs as they develop, it can facilitate collaboration on the decisions necessary to harmonize these standards.

Further, GIS can compare different carbon accounting approaches and their implications on credit generation. This could be accomplished both by incorporating broad global data sets such as Wood’s Hole’s Global Pan-Tropic Biomass data, and by incorporating existing “best practice”, such as the new LEAF Standard Operating Procedure for Measuring Terrestrial Carbon. GIS can be used to clarify land tenure rights by providing a central repository for ownership data and a public forum for dispute settlement, though the impetus for this will inevitably fall on local policy makers. Finally, linking credits to explicit parcels of land can prevent possible emission double-counting.

If forest carbon credits will eventually be transacted in a similar way to other commodities, it is necessary to move towards a central database to account for the different valuations of different types of carbon. This does not mean that there can only be one type of credit in an end-game scenario — on the contrary, all that is required is that each different type of credit has a series of stringent standards applied to its production.

These could include the different standards as they exist now (VCS, ACR, CAR, Gold Standard, CDM), as well as additional certifications (for example CCBA and FSC) to capture non-carbon characteristics of the project. In addition such a platform needs to be able to distinguish among credits of different vintage, and must be linked back to the originating project, to account for reversals or invalidation of credits. Developing a framework capable of accounting for all the different standards will help market participants and regulators narrow in on common facets shared by these standards and will hence facilitate the development of linkages between standards.

In addition to providing a central clearinghouse for data on land use, carbon stocks, and project crediting, such a platform can also be immensely helpful to investors by providing data on comparables for investment due diligence, and providing more transparency regarding a typical project cycle, including timing of costs and revenues.

The main effect of this would be to radically democratize the REDD market from its current state, where consultants dominate due to the technical, opaque and bespoke nature of registering a project. If a large database of validated projects exists, potential investors, landowners and policy makers can quickly evaluate the feasibility of developing such a project based on analyzing comparables. Further, it would quickly follow from aggregating project data and modeling into a central location that many aspects of project development could be standardized to a great degree. While one baseline methodology may not be suitable globally due to political considerations, such a system could incorporate a narrow range of different baseline models and the data that drive them, vastly reducing the cost of project validation.

Another advantage of such a project database would be to facilitate the development of an insurance market for projects, since the most important requirements of insurance instruments are good data on comparable projects and a large and diversified project pool. The ultimate result of both of these developments would be to reduce administrative and consultative expenses and better channel investment to the activities actually taking place on the ground.

The political and regulatory aspects that are hampering demand for forest carbon credits can only be solved by governments taking decisive and coordinated action. In the meantime, the market must bootstrap using limited funding from CSR buyers and government grant programs to focus in upon a series of best practices learned from developing pilot projects. The construction of a centralized and open technology framework can facilitate the development of such best practice through knowledge sharing, and will start to standardize the financing of such projects. Only when a sufficient pool of past experiences are collected and collated in a comparable way will investors gain confidence in the market, and will standards and regulatory bodies be able to narrow in on a successful structure for the optimum mechanism for REDD+.