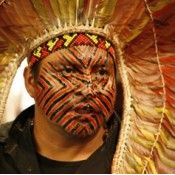 1 November 2012 | Acre| Brazil | I have followed via social networks, the meeting in California organized by some environmental organizations on REDD. To the surprise of many indigenous organizations that are currently organizing seminars and meetings to discuss the issue to understand the system, the discussion in California was characterized as NO REDD. Nothing against those who are for or those who are against, currently my position is neutral, I want to better understand before making any hasty decision that could jeopardize the future of my people or our planet.

This discussion is very similar to the missionary vision, in that anyone who is in favor is going to hell and anyone who is against going to heaven. I think these guys have been reading too much of Alex Polares’ book, in which he shouts, with the words of John the Baptist, instead of The Voice that cries out in the Desert, he says the Voice that Cries out in the Forest. On both sides, people have been co-opted with the mission of converting traditional communities in REDD supporters, just as there are those who are against and preach terrorism and the end of the world if someone who is in favor of REDD projects takes a chance to speak.

Personally I prefer to snuggle on a hammock (‘REDE’ in Portuguese) on a paxiuba floor and feel the cool breeze of the air blow across my face. I’d rather not go to heaven or to hell, but fight here on earth to make our paradise here. UTOPIAS cannot die.

Jose Carmelio Niinawa – President of the Hunikui Federation – was a presenter. To my surprise, I saw an interview of Niinawa last week in which he vehemently argued that the demarcation of indigenous lands in Acre have stalled because of REDD projects. With this statement Niinawa takes all the blame away from the agriculture caucus of the Brazilian Congress, the mining projects in indigenous lands, oil exploration projects, the Decree 303 of the Brazil’s Office of the Solicitor-General (AGU), by which, so cowardly and arbitrarily, the government wants to take away all the rights of indigenous peoples conquered throughout the history of our country, etc … Under the hypothesis that REDD is one of the causes of the stoppage of demarcation of indigenous lands, we could say that there are ‘other small things’.

I also saw in a recent interview that he said he is receiving death threats because of denouncing the abuses of the REDD project in Acre … Here in this small Acre, I never heard of such a threat…never let yourself be carried away by vanity to impress people or call attention of the media making up a hairy story like that. It is necessary to be responsible and serious when making such assertions, to not run the risk of losing credibility so that when you really need the space of media, people do not take it seriously…

Indigenous Leader To NGOs: No One Speaks For Us-Or Thinks For Us
NGOs Square Off Over REDD In California