Cities and communities around the world have embraced innovative financing mechanisms designed to ensure long-term supplies of clean drinking water by promoting good stewardship of the surrounding watershed.  Now, say practitioners, it’s time to scale up – by keeping the programs simple, focused, flexible and local. 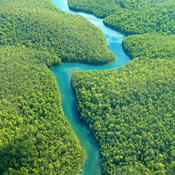 25 June 2012 | RIO DE JANEIRO | Brazil | Streams and rivers that originate high in the mountains irrigate cities and towns across the world, but encroaching population and increasing pollution jeopardize many mountain watersheds, raising the question -– what will happen to these communities if their upland water suppliers aren’t fit to supply them.

One solution pioneered in New York and now being implemented in Lima and elsewhere, is to implement a Payments for Watershed Services program, which encourages downstream users of clean water – mostly urban – to financially support those upstream – usually rural – to manage the watershed more sustainably.

The 2008 State of Watershed Payments report documented 216 such programs around the world, with more than 100 of them in Latin America. Most of these, however, are small programs involving one municipality, while China favors massive programs encompassing large swathes of an entire watershed.   As a result, China’s 47 programs protected 270 million hectares in 2008, while Latin America’s 101 programs protected just 2.3 million hectares.

That raised a key question that policymakers,practitioners, and scientists addressed at a Forest Trends side event, co-chaired by Peruvian Deputy Environment Minister, Gabriel Quijandria, here during last week’s United Nations Conference on Sustainable Development (Rio +20): what’s the best way to scale up projects?

The consensus to emerge: the best way to scale up is to develop programs that are simple, flexible, and constructed in ways that are compatible with local culture. The challenge will be striking the right balance between getting big fast and maintaining the kind of rigor needed to ensure the ecosystem services are delivered.

Nigel Asquith, the director of strategy and policy at environmental non-profit Fundacií³n Natura Bolivia (FNB), pointed out that his organization started in one municipality in Bolivia and is now spreading the same model to 23 municipalities in Bolivia as well as to Colombia, Ecuador and Peru. That model, he says, works well in the Andes, but may not work in other regions.

“The small-scale municipal model is replicable within the Andes,” he says. “Our next question is how replicable is it to do it to scale in other parts of the world.”

Carlos Muí±noz Pií±a, director of resource economics at Forest Trends (publisher of Ecosystem Marketplace), stressed the need to be proactive and take advantage of political opportunity. He was able to help create Mexico’s Programa para el Pago por Servicios Ambientales Hidrolí³gicos (Program for the Payment for Hydrological Environmental Services) at the national scale through a political reform that implemented a new forestry law which allowed for payment for environmental services. It was a new administration in Mexico at the time and the reform received full support from the newly elected congress.

The program was implemented in 2007, and generates payments to conserve forest areas that have been shown to recharge water supplies.

Other panelists focused on the need to communicate benefits – and to avoid overloading programs with other objectives, such as biodiversity preservation.

“Water is going to be the key service which investors are looking at,.” says Madhav Karki, the deputy director of the International Centre for Integrated Mountain Development (ICIMOD), a regional organization designed to share information on the effects of climate change on mountain ecosystems.

Implementing PWS projects requires involving local communities. Project elements such as terminology and medium of exchange play a role in how successful the project will be.

Asquith found this out while trying to implement local municipal level PWS projects in Bolivia. Asquith received more local participation when he omitted the word payments-a term the Andean culture is leery of- when explaining watershed services and replaced it with reciprocity.

The mountain communities in Bolivia didn’t relate to cash payments, so the program was structured to offer in-kind benefits. Fruit tree seedlings, bee boxes and barbed wire compensate the local communities for protecting the watershed and while directly assisting the move into alternative livelihood strategies that support healthy watersheds in ways that cash payments would not. Fruit tree seedlings, for example, support agroforestry instead of other agriculture on sloping land, and barbed wire helps to keep cattle out of riparian and forested areas.

For Bert de Bievre, a key challenge will be improving ways of measuring the environmental outcomes that motivate the, “buyers,” or funding source, for PWS projects. A hydrologist with the Consocio para el Desarrollo Sostenible de la Ecorregií³n Andina (Consortium for the Sustainable Development of the Andean Ecoregion, “CONDESAN”), he says that monitoring, to the extent it has been done, has focused on proxies like hectares of forests and the numbers of trees, rather than on specific ‘watershed service’ outcomes, such as dry season flows.

“The research has cost a lot of money,” Bievre says. “The results of that research are not really visible today in our decision making.”

Indeed, all panelists agreed that more monitoring of ongoing projects needs to be done, but that it’s also important to not let the perfect be the enemy of the good.

“Get stuff on the ground first,” said Michael Bennett, a senior researcher for Forests Trends working in China. “It’s like a ‘ready-fire-aim’ kind of approach.”