The US state of Washington could soon put a price on carbon, joining its Pacific Coast neighbor California in taking a step that the federal government has so far failed to take to address carbon pollution. The details are still being worked out, but many experts see Washington working hard to ensure that its system is compatible with California’s. 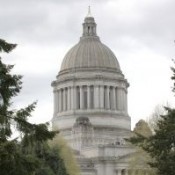 13 May 2014 | Washington Governor Jay Inslee is known to be a man of action: climate action, that is. As a member of the US Congress, he was one of the major backers of a comprehensive climate bill that barely passed the House of Representatives in 2009. Now, as state governor, he may be one step closer to achieving something that he wasn’t able to at the federal level: putting a price on carbon.

The taskforce will provide recommendations on the design and implementation of a cap on carbon emissions in the state and establishment of a market-based program to meet those limits. Its recommendations, due to be delivered before November 21, will inform legislation that Inslee plans to request for consideration during the 2015 legislative session.

“Governor Inslee has recommitted fervently to passing climate legislation in Washington,” said Sean Penrith, Executive Director of The Climate Trust, a carbon offset program that supports the Oregon Carbon Dioxide Standard (which sets emissions benchmarks for new energy facilities and also allows the use of offsets for compliance) and also has projects in Washington. “He was voted in on climate issues and will stick to the commitment. I’m encouraged by his proposal.”

Many policy watchers expect the taskforce’s recommendations to emulate California’s cap-and-trade program. For example, the taskforce is explicitly directed to consider options to offset the cost of reducing emissions to consumers and businesses. Offsets are instruments that represent the reduction, avoidance or sequestration of one metric tonne of carbon dioxide equivalent that occurs outside of sectors that are required to participate in the program. California allows regulated entities to meet up to 8% of their compliance obligations with carbon offsets, which can be cheaper than carbon allowances offered for sale by the state.

If they want market linkage, Penrith said he would expect Washington to emulate the percentage of allowable offsets in California’s program.

Aligning aspects of its policy design with California would allow Washington’s program to potentially establish formal links. Linking emissions trading systems is seen as a way to lower overall compliance costs, minimize the leakage of emissions from one state to another, avoid unintended economic competition and allow for greater overall emissions reductions.

Ã¢â‚¬Â¦But No Two States are the Same

However, Alan Durning, Executive Director of the Sightline Institute, a Northwest-focused sustainable policy think-tank, pointed out the design of the California system was constrained by some peculiarities of California law that will not apply in Washington.

“California has a super majority voting requirement for new taxes but not for fees, Washington does not have this provision,” he said.

The difference could have considerable influence on how potential revenues from the auctioning of carbon emission permits could be allocated, Durning said. While California’s revenue is required to be reinvested in programs that further reduce greenhouse gas emissions, Washington may choose to direct its revenues to the state’s general or capital funds. In a state with no income tax, the possibility of new revenues could set the stage for a coalition of influential supporters for planned legislation: infrastructure proponents and supporters of Kindergarten through 12th grade public education. Both sectors have been largely underfunded in recent years with the state failing to pass infrastructure funding bills over the last two years and a State Supreme Court ruling that the state has not met its obligations under the state constitution to fully fund core basic education.

In 2009, the Washington State Legislature voted against joining the Western Climate Initiative (WCI), which is a cross-border carbon trading program that, at its height, included seven US states and four Canadian provinces as members. Today, however, it only features British Columbia, California and Quebec pricing carbon. When Washington opted out in 2009, federal climate legislation sponsored by Henry Waxman and Ed Markey was making its way through Congress, and a federal solution seemed more likely. Some state legislators who supported action on climate voted against joining WCI in favor of a more uniform national system. But federal legislation collapsed in 2010, and Durning now says the pressure is back for state action.

Additional momentum for a 2015 bill comes from Washington’s neighbors to the north and south by way of the Pacific Coast Collaborative. Washington, British Columbia, Oregon and California signed the Pacific Coast Action Plan on Climate and Energy in October 2013, which commits them to coordinate on actions they take to address climate change. First in their agreement is to account for the cost of carbon emissions within their respective borders.

Politically, the outcome of a climate bill in 2015 will largely depend on the composition of the state Senate. There are several competitive seats in this year’s election. If there is Democratic control in the Senate, Inslee’s proposal will face an easier road to passage. If Republicans maintain control, then a climate bill may not have a chance. Inslee could try again in a second term if he wins re-election in 2016 or a ballot measure could be proposed that year.

The likelihood of a bill passing may “depend less on the intricacies of policy, but rather on the ability of the bill’s sponsors to leverage data which demonstrates that jobs won’t be lost, the impact on low income households, provides social equity, and a real effect on emission reductions,” Penrith said.

Ben McCarthy is a Research Assistant in Ecosystem Marketplace’s Carbon Program. He can be reached at [email protected]