All week, we’ve heard how the China-US Climate Pact changed the climate game for the better, and most of what we’ve heard is wrong. The game has changed alright, but it didn’t change this week in Beijing; it began changing after Copenhagen but officially changed last year in Warsaw. If you don’t understand that, then nothing that happens at the December talks in Lima will make sense. 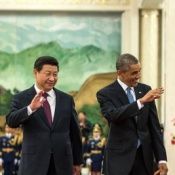 In the end was a different word, and the word was “contributions”.

On Tuesday in Beijing, we saw what a difference a word can make when US President Barack Obama and Chinese President Xi Jinping jointly announced they’d contribute to the climate effort by doing things that each could realistically achieve.

Hailed by some as a game-changing bolt from the blue and dismissed by others as too little too late, their announcement is the most visible test to date of a new set of rules that climate-change negotiators established in Warsaw last year – rules that began with one word that changed everything.

“Before the Warsaw talks, we all talked about ‘commitments,'” says Peruvian Environment Minister Manuel Pulgar-Vidal, who will be presiding over December’s talks in Lima. “This year, we’re talking about ‘contributions.'”

Gone for now is the quest for a top-down global deal setting one concrete but unworkable emission-reduction target for all countries, and it is place is a flurry of “Intended Nationally Determined Contributions” (INDC), which are bottom-up proposals that countries around the world will begin submitting to the United Nations Framework Convention on Climate Change (UNFCCC) after December’s talks end. Tuesday’s announcement isn’t just a bilateral deal, but the first indication of what the US will be putting forward: “The United States will submit its 2025 target to the Framework Convention on Climate Change as an ‘Intended Nationally Determined Contribution’ no later than the first quarter of 2015,” the White House said in summarizing Tuesday’s announcement on its web site.

It should come as no surprise that the US and China are providing the first big test of the INDC concept, because they were at the center of the logjam that led to their creation in the first place. Specifically, the United States, Japan, and some other developed countries refused to commit to reductions until developing countries, as well as economic powerhouses like China and Brazil, made commitments of their own. The shift from “commitments” to “contributions” takes the principle of “common but differentiated responsibilities” out of the footnotes and into the forefront of negotiations. In so doing, it turns the talks upside-down.

The idea is simple: negotiators will first see what each country puts on the table, and then they’ll try to incorporate these proposals into a global agreement that will keep the earth’s temperatures from rising more than 2°C. Instead of starting with global limits and deadlines that allow for some flexibility in how they’re achieved, countries are starting with local proposals and then rolling them up into a synchronized global framework.

So, yes, the game changed, but it didn’t change this week in Beijing. It changed last year in Warsaw. On Tuesday, we got to see the change in action..

What is an INDC?

On December 1, negotiators will arrive in Lima for this year’s climate talks, and their first order of business will be to decide what constitutes a good INDC and what doesn’t. It’s a process that began in Warsaw and reached a fever pitch in Bonn, Germany, after more than two dozen countries submitted their ideas. In July, Kishan Kumarsingh of Trinidad and Tobago and Artur Runge-Metzger of the European Union distilled those proposals into a draft negotiating text on INDCs.

It’s essentially a laundry list of activities that range from “Technology, investment and capacity-building needs” to “International cooperation, including cooperative actions” both of which are core to the US-China agreement and will be central to all INDCs going forward.

But nothing in the draft text is etched in stone, and you can expect it to first bloat from its current form into an incomprehensible mess of phrases, half-phrases, and [bracketed text] before Kumarsingh and Runge-Metzger boil it down into something manageable.

They are co-chairs of the Ad Hoc Working Group on the Durban Platform for Enhanced Action (ADP), which means they, together with Pulgar-Vidal, are charged with herding all of its cats, cattle, and canaries towards agreement on what makes a good INDC.

For now, the only thing everyone agrees on is that INDCs must be transparent and comparable across countries, so that every country gets a fair chance to be recognized for its contributions or compensated for its losses. If most countries feel the INDCs are fair, the theory goes, they’ll play the game to win, rather than simply not to lose. Only when that process is finished can the US, China, or any other country really finalize their own INDCs.

Countries will then spend the first few months of 2015 uploading their INDCs to the UNFCCC web site, ramping up an iterative process designed to blend the bottom-up INDCs with top-down reality checks, culminating, we hope, with a global agreement at the Paris Climate Summit (COP 21) at the end of 2015.

At that point, contributions become commitments again, but they’ll be commitments to specific actions that suit each country’s reality, rather than to a one-size-fits all agreement that, in reality, never quite fit anyone right.