Ecosystem Marketplace’s State of the Voluntary Carbon Markets 2016 report tracked a 10% increase over 2014. The report launched May 26 at Carbon Expo in Cologne, Germany and the findings demonstrate how individuals, corporations and state and national governments are using voluntary carbon markets to ramp up their own climate action as the world forged an international agreement on climate change. 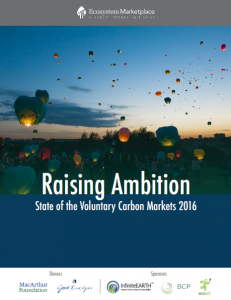 26 May 2016 | Cologne | Germany | Voluntary buyers around the world paid to offset the equivalent of 84.1 million (M) tonnes of carbon dioxide in 2015, a 10% increase from 2014, led by private-sector companies taking proactive steps to reduce emissions ahead of regulation, according to a new report from Forest Trends’ Ecosystem Marketplace (EM).

The EM report, Raising Ambition: State of the Voluntary Carbon Markets 2016, shows that while the world’s nations prepared for the historic Paris Agreement on climate change last year, individuals, corporations, and state and national governments used voluntary carbon markets to ramp up their own climate action.

The new report is being launched at the Carbon Expo 2016 in Cologne, and its release comes as the first round of climate talks to iron out the details of the landmark Paris Agreement wraps up in Bonn, Germany. Other key findings include:

Looking ahead, there are a number of promising opportunities to shore up demand for voluntary carbon offsets or, alternatively, to transition them to budding compliance markets. For example, the International Civil Aviation Organization (ICAO) – the UN body that governs the sector – has set a goal of achieving “carbon-neutral growth from 2020,” positioning airlines to become major offset buyers as they look to bridge the gap between achievable emissions reductions and their ambitious targets.

Voluntary suppliers are also looking towards private-sector companies setting new “Science-Based Targets” and those joining the World Bank’s Carbon Pricing Leadership Coalition, officially launched in Paris, as a potential source of future offset demand. Major events such as the World Cup, the Olympics, and the Superbowl have each gone carbon-neutral, putting individual, high-profile events at the forefront of voluntary carbon finance.

“This is a time of flux for voluntary carbon finance – an interim period as companies and governments segue from their early pursuit of carbon neutrality to even more ambitious post-Paris climate action,” said report author and EM Senior Associate Kelley Hamrick. “There are many opportunities and potential new avenues for demand, but we have to wait and see if they materialize.”

“Paris reframed our ideas about shared responsibility for addressing climate change by saying everyone needs to play a part in solving this crisis,” said Forest Trends Founding President and CEO Michael Jenkins. “Now armed with a mandate from the world’s governments and biggest businesses, we’re in a unique position to go above and beyond what’s presently required – bending the curve toward achieving what’s truly needed to avoid climate catastrophe. Voluntary offsetting is one promising solution to help bridge that gap,” Jenkins added.

For more coverage of the report launch and information on the voluntary carbon markets, listen to the latest installment of the Bionic Planet podcast.