Voluntary carbon markets have earned the respect of governments, companies, and environmental groups around the world, but they haven’t achieved anywhere near the scale needed to plug the regulatory gap. Leading pracititioners at this year’s Carbon Expo say they’ve created a system that works.  Now they just have to spread the word. 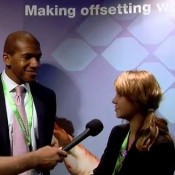 Voluntary carbon markets have earned the respect of governments, companies, and environmental groups around the world, but they haven’t achieved anywhere near the scale needed to plug the regulatory gap. Leading pracititioners at this year’s Carbon Expo say they’ve created a system that works.   Now they just have to spread the word.

12 June 2012 | It’s hard to imagine a more beneficial yet oft-maligned financial instrument than voluntary carbon offsets. Over the past six years, this sector has incubated some of the most cost-effective emission-reduction mechanisms on the planet, eliminated hundreds of millions of tons of greenhouse gas emissions, funneled hundreds of millions of dollars to clean-development projects, and seen its methodologies incorporated into government programs from California to Australia.

“There’s just one problem,” said Jonathan Shopley, Managing Director of the Carbon Neutral Company, on the closing day of this year’s Carbon Expo in Cologne, Germany. “They forgot to share that news with the wider world.”

“We’re not seeing widespread acceptance by corporates,” he said. “That’s because the voluntary carbon industry has done a bad job of marketing itself.”

That’s one of the many take-homes we got at this year’s Carbon Expo.

The State of the Voluntary Carbon Markets report showed continued demand for “gourmet” offsets – such as those that generate emission-reductions by distributing clean cookstoves across the developing world.

“The report shows that it’s incumbent on us to identify those drivers that come from the carbon projects,” said Jamal Gore, Managing Director of UK offset retailer Carbon Clear.   “The companies that are buying carbon credits and offsetting voluntarily are doing it for their own reasons because they see business value in managing their carbon emissions.”

“Clients continue to want to put a price on carbon, and to do it with projects that speak to them, whether that means doing it closer to home, doing it with projects that fit into their supply chain, or with sectors that they’re aligned to,” said Zubair Zakir, Director of Carbon Sourcing at the Carbon Neutral Company.

Shopley, however, wondered if the emphasis on co-benefits wasn’t diminishing the credibility of voluntary offsets as real emission-reduction tools.

“By making it a ‘cute’ market, are we preventing it from scaling up?” he asked.

Beyond Cute And Fuzzy

Several practitioners pointed out that voluntary offsets were only popular among companies with an image to protect.

“Those corporates who do use voluntary offsets are more consumer-oriented,” said Hanrahan. “That’s what’s driving the increased interest in higher-end credits, but it’s also failing to engage the entire supply chain.”

In theory, consumer demand would trickle down to even the most removed supplier.

“We know that Wal-Mart is doing it,” said Gore.   “They’ve sent questionnaires to 60,000 of their suppliers around the world asking them about their emission-reduction programs.”

Hanrahan urged offset providers to learn how corporations function – both internally and externally.

“We need to think of why those corporates that are buying do buy, and we need to then help create an environment where it’s safe for someone to take a leadership position around offsetting and to vocally communicate their position,” he said.   “We have to understand their concerns and address them, and win their confidence.”

Many said that growing government acceptance of methodologies developed in voluntary markets will help promote uptake among skeptical emitters.

“The voluntary market has created a platform for compliance markets,” said Vivek Dugar, a Director at Australian carbon wholesaler WeAct, citing the Ecosystem Marketplace report Bringing it Home: Taking Stock of Government Engagement with the Voluntary Carbon Market.   “This has already helped to educate people on the difference between an offset and a tax, and I suspect this understanding will help spread awareness in the future.”

“They’ve essentially said, ‘We endorse and recognize anybody who’s carbon neutral who uses prescribed standards,’” he explained. “You’re starting to see governments become more comfortable and familiar with the voluntary carbon market, and actually promoting it.”

The Good And Bad of Fragmentation

Antonioli points out that new regulatory regimes in China, Brazil, and Korea are also incorporating mechanisms and methods pioneered in the voluntary markets, and believes this will help ensure some commonality among disparate programs.

“You might see the use of voluntary markets to move ahead and help to develop the frameworks that are going to enable those regulatory regimes,” he says. “The voluntary market can provide a consistent framework for how these markets are developed.”

While practitioners stressed the need for global agreement on certain principles, they also said that fragmented markets are adapting to local demands and also promoting healthy competition among practitioners and even standards.

“Regional fragmentation isn’t all bad, because we get local needs reflected, and among those people find their common ground,” said Gold Standard CEO Adrian Rimmer.

Indeed, several practitioners mentioned the need to maintain a dynamic balance between cooperation and competition.

“Every morning, we wake up and go to the office and ask how we can make the system more robust, more streamlined, more transparent, and just better,” said Antonioli.   “That’s something that’s been missing in the regulated market, but it’s largely what got voluntary markets to where they are today.”

“Historically, the voluntary market has been seen as the stepchild of the compliance market, and events of the last year have shown that the two can stand separately and the voluntarily market can stand on its own,” said Gore.   “The companies that are buying carbon credits and offsetting voluntarily are doing it for their own reasons because they see business value in managing their carbon emissions.”

Join us in DC