The market for voluntary carbon offsetting hit a three-year high in 2011, transacting more than $576 million of offsets, second only to 2008’s record $776 million, according to the 6th “State of the Voluntary Carbon Markets” report, which also found more US demand and record sales from Asian wind farms and clean development projects in Africa. 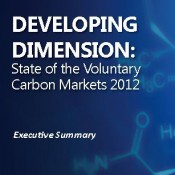 The market for voluntary carbon offsetting hit a three-year high in 2011, transacting more than $576 million of offsets, second only to 2008’s record $776 million, according to the 6th “State of the Voluntary Carbon Markets” report, which also found more demand from buyers in the US and record sales of offsets from Asian wind farms and the coming-of-age of clean development projects in Africa.


COLOGNE | Germany | 31 May 2012 |  The market for voluntary carbon offsetting hit a three-year high in 2011, transacting more than $576 million of offsets, second only to 2008’s record $776 million. This finding comes from the 6th “State of the Voluntary Carbon Markets” report, released today at Carbon Expo in Cologne, Germany by Ecosystem Marketplace in partnership with Bloomberg New Energy Finance. Among the report’s most surprising findings are a significant increase in demand from buyers in the US and major changes in the mix of offsets capturing market share, such as record sales of offsets from Asian wind farms and the coming-of-age of clean development projects in Africa.

In 2011, corporate buyers continued to dominate the market, contributing $368 million – or nearly 65% – of the market’s total value, with European corporate buyers remaining the largest source of voluntary offset demand. Many corporate buyers used offsets to meet sustainability targets and “green” their supply chains, while others used them to connect with consumers and employees.

Trading activity in the “over-the-counter” market – where most of the market’s value is created – remained strong, branching into new project types and markets. While the number of transactions increased in 2011, the volume of offsets transacted decreased because the market did not see a repeat of one large outlier trade from 2010.

“The markets’ increase in value points to a continued demand, especially on the corporate front, for voluntarily offsetting emissions,” said Katherine Hamilton, Director of Forest Trends’ Ecosystem Marketplace initiative. “Some of our more interesting findings, however, are in the composition of the market, which continues to develop new dimensions on both the supply and demand fronts.”

One of those surprises came from the United States which emerged as the world’s largest single- country buyer of voluntary offsets despite the lack of impending regulations that had previously sparked demand from companies looking to get a leg up on the law.

“US buying is coming from corporate commitments to grow the marketplace based on their desire to make a domestic impact,” said Ecosystem Marketplace Carbon Program Manager Molly Peters-Stanley. “This more than compensated for the loss of federal pre-compliance positioning.”

Another surprise came with the ascendance of offsets generated by wind farms, which had previously lagged behind offsets from projects that sequester carbon in trees.   In 2011, in response to both economic and competitive conditions, project developers rushed wind projects to market, sparking purchases from cash-strapped buyers who might normally have gravitated to pricier forest-carbon projects.

“Price sensitivities drew some buyers away from the more expensive forestry sector – which nonetheless contributed the highest value to the marketplace because their projects held their own in terms of price,” said Peters-Stanley.

One of the more promising findings came from Africa, where the number of offsets from projects that promote the use of clean cookstoves among the rural poor surged at least 40% and probably much more.   These and other project types tracked in Africa, like water purification tools and forestry, have numerous knock-on social benefits – such as the reduction of time spent gathering wood, the improvement of internal air quality and local employment.

Such programs are relevant not only for direct emissions reductions, but also as learning tools. “Trends in the voluntary markets continue to influence not only the much larger compliance markets but also broader conservation finance initiatives. We continue to focus on this space because of its role in incubating continued innovation,” said Michael Jenkins, President and CEO of Forest Trends.