The policy-driven carbon market contracted in 2010, but the voluntary market achieved its highest volume ever – thanks in part to renewed spending on corporate social responsibility and the release of new methodologies for forest carbon.  Indeed, the number of participants based in the developing world more than doubled in response to demand for REDD credits. 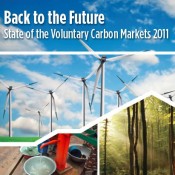 The policy-driven carbon market contracted in 2010, but the voluntary market achieved its highest volume ever – thanks in part to renewed spending on corporate social responsibility and the release of new methodologies for forest carbon.   Indeed, the number of participants based in the developing world more than doubled in response to demand for REDD credits.

2 June 2011 | BARCELONA | The voluntary carbon market shrugged off policy failures and the closure of the Chicago Climate Exchange in 2010 to post a 34% surge in volume to a record 131 million tons of carbon dioxide equivalent (MtCO2e) worth at least $424 million, according to Back to the Future: State and Trends of the Voluntary Carbon Markets 2011, published Thursday by Ecosystem Marketplace and Bloomberg New Energy Finance.

“The healthy volumes reflect the growing emphasis of corporate social responsibility spending on climate change,” says Katherine Hamilton, Managing Director of Ecosystem Marketplace.   “The marketplace showed itself to be incredibly resilient – bouncing back from failed US legislation expectations, expanding its reach in developing countries and returning to its CSR roots.”

This marks the fifth consecutive year the two organizations have published the report, which this year is sponsored by Carbon Trade Exchange, together with ClimateCare, Climate Friendly, Det Norske Veritas (DNV) and Emergent Ventures International (EVI).   It is based on input from nearly 300 market participants and provides not only volumes and prices, but a comprehensive analysis of project types, locations, and the motivations of buyers.

“As in previous years, the US remained the epicenter of the voluntary carbon market, providing and purchasing over one-third of carbon credits,” says Milo Sjardin, Head of US Analysis for Bloomberg New Energy Finance. “The evaporation of chances for federal climate change legislation, however, reduced its market share with growth coming from other areas such as Latin America and forestry.”

Latin America especially benefitted from the development of new methodologies for projects aimed at saving endangered rainforest and capturing carbon in trees – a mechanism known as “Reduced Emissions from Deforestation and Degradation (REDD)”.

REDD accounted for 29% of all emissions reductions documented, thanks in part to new REDD methodologies published by the Verified Carbon Standard (VCS), which provided project guidance for creating a full third of all credits documented in 2010.

The surge of REDD activity led to unprecedented market activity in the developing world.   This included a doubling of credits from Latin America, as well as more than doubling of the number of project developers and buyers headquartered in Asia, Latin America and Africa – thus laying the foundation for long-term growth in the Global South.