As the second day of a three-day UN summit aimed at reducing poverty winds down in New York, it’s clear that many of the “Millennium Development Goals” agreed to ten years ago and set for 2015 will not be met.   Janet Ranganathan of the World Resources Institute argues that Payments for Ecosystem Services can help change that. 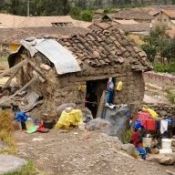 As the second day of a three-day UN summit aimed at reducing poverty winds down in New York, it’s clear that many of the “Millennium Development Goals” agreed to ten years ago and set for 2015 will not be met without drastic changes to the way we do business. Janet Ranganathan of the World Resources Institute argues that Payments for Ecosystem Services offer one such change.

21 September 2010 | Over 140 heads of state gathering in New York this week to assess progress on the 2015 Millennium Development Goals (MDGs) must face a stark reality. Most developing countries will fall short of one or more of the eight goals, aimed at vanquishing extreme poverty and delivering basic services to the world’s poor.

Progress is faltering under an intensifying triple challenge: endemic poverty; the early destructive impacts of climate change; and the loss of nature-based services (water, food, fuel wood etc) on which most of the world’s two billion rural poor depend.

While encouraging progress is being made on certain MDGs outside cities – for example, in providing access to clean drinking water and ante-natal care – rural areas remain the hotbeds of entrenched poverty in most developing countries. Only four in ten rural families have improved sanitation, for example, and their children are twice as likely not to attend school as their urban counterparts. Yet these same rural regions will increasingly bear the brunt both of livelihood-threatening climate change impacts such as extended droughts and changed rainfall patterns, and the consequences of accelerating ecosystem degradation. It is not uncommon for poor households to obtain half to two-thirds of their income from the goods and services that nature provides. And for the 1.1 billion people living in extreme poverty, ecosystem services such as food and water are essential for daily survival. Yet research suggests that 60% of the ecosystem services on which humanity depends are being systematically degraded.

How can the heads of state gathered in New York change this disturbing dynamic? One answer will be forthcoming at a high level event on the margins of the MDG Summit attended by top officials from governments, UN agencies and civil society groups. Hosted by the UN Development Programme (UNDP), the event will seek to reinvigorate progress toward the MDGs by calling for a global effort to scale up local nature-based solutions to eradicating poverty and strengthening people’s resilience to climate change.

In a keynote speech, UNDP Administrator and former New Zealand Prime Minister Helen Clark will propose that projects which anchor local economies and food security in sustainable use of ecosystems should be scaled up across the developing world to help meet the MDGs. Her remarks, in which she will also call for the environment to move “from the periphery to the center of development thinking” reflect a growing recognition within aid agencies of the key role of healthy ecosystems in successful development.

Decades of field experience in Africa, Asia and Latin America have taught that community-led projects that conserve biodiversity and generate economic and other benefits can greatly improve quality of life. The 2008 World Resources Report, produced by the World Resources Institute, World Bank, UNDP and UNEP, demonstrated a clear link between scaling up nature-based income for the poor and improving rural communities’ economic, social and environmental resilience. And the latest winners of the Equator Prize, to be honored at today’s UNDP event in New York, demonstrate successful formulae for community- led initiatives on three continents that sustainably use fisheries, forests and other natural resources to improve local populations’ lives and livelihoods (See sidebar).

To scale up local solutions such as these – and regain momentum on the MDGs – will not be an easy task. A WRI analysis prepared for the MDG Summit, Ecosystems, Climate Change and the MDGS: Scaling Up Local Solutions, argues that governments and donors should adopt a five-point framework for action which would provide a roadmap forward by:

Preserving nature and pursuing economic development used to be seen as mutually exclusive; one had to be sacrificed in the interests of the other. In fact, it is increasingly clear that, at least for the rural poor, sustaining nature and pursuing successful, climate-resilient development are mutually dependent. Without an approach that embraces both, any hope of achieving all the Millennium Development Goals will recede over the horizon.

Janet Ranganathan is the Vice President for Science and Research at the World Resources Institute. She oversees and takes a lead role in the planning, quality control, and evaluation of WRI’s research and publications, and can be reached at [email protected]     +1 (202) 729-7656

Read the Original Article on the WRI Web Site
Payments for Ecosystem Services: Download the Primer