The US Fish and Wildlife Agency is in the early stages of crafting a permitting system that has the potential to motivate development industries to implement bird protection measures and reduce bird deaths. The agency is mulling over several program approaches that all have at least one similar component: each follows the mitigation hierarchy. 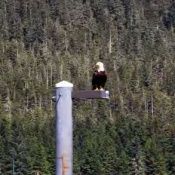 24 July 2015 Every year, millions of birds collide with communication towers, drown in wastewater disposal pits, or get electrocuted by transmission lines, according to the US Fish and Wildlife Service (FWS), which has launched an open public discussion to determine when companies are and are not liable for “incidental bird take”.

The Service is hopeful that legal certainty in the form of a permitting system will encourage companies to implement best management practices and conservation measures. The carrot is that a business in compliance with a regulatory system can receive an incidental take permit, which would mean it no longer faces prosecution if a protected bird is accidentally harmed by its infrastructure.

Critically, this authorization program will follow the mitigation hierarchy of first avoiding, then minimizing and lastly compensating for adverse impacts on migratory birds.

The Service’s use of the mitigation hierarchy was welcome news for Barton James, the Executive Director of the National Mitigation Banking Association, an organization promoting the use of mitigation banking through legislation and policy change. “We’ve invested a considerable amount of time and work with the Service to establish a sound understanding of the mitigation hierarchy and are pleased to see where that effort is filtering out,” James said.

Robert Dreher, the FWS Associate Director, couldn’t provide specifics on the compensatory mitigation component during a public webinar, but he did note that the program intends to implement mitigation at landscape-scale and mitigation banking will be a key part of achieving this. “We’re anticipating a lot of comments on this point,” said Charisa Morris, Branch Chief of the Division of Migratory Bird Management.

The Service is looking at four potential program setups that can be used in coordination with each other or separately. One approach would establish general authorization for industries that take the appropriate action to avoid or reduce bird take and mitigate when it’s unavoidable. This approach focuses on infrastructure-types that have understood impacts on birds. These structures include communication towers, wastewater disposal pits, methane burners and electric transmission and distribution lines. The science is there, Morris said. There are proven measures that can safeguard birds against adverse impacts.

Many of these measures are seemingly uncomplicated and involve slight location and height alterations when building transmission lines for instance. Other actions include netting around oil, gas and wastewater disposal pits and putting the appropriate covering on electric utility poles.

The second approach would enable the Service to issue permits on a project-by-project basis. This method follows the mitigation hierarchy, as well, and any authorized take would require mitigation.

Yet another method the agency is considering involves using a memorandum of understanding (MoU). Government agencies would use the MoUs to identify and implement necessary conservation and mitigation measures.

The fourth approach is simply to continue developing voluntary guidance regarding measures industry can take to minimize harm. In this case, the Service wouldn’t authorize incidental take for companies and other entities. However, when prosecuting illegal incidental take, law enforcement would take into consideration those in strong compliance with the voluntary guidance and perhaps deliver a more lenient decision.

“While the proposed authorization program alone will not address all of the conservation needs of bird populations, it could help with many human-caused sources of bird mortality – and that would be a great start,” Morris said.

In terms of cost, the Service hasn’t made clear just how it intends to fund this permitting system which will increase workloads at the already overloaded FWS field offices.

The FWS is accepting comment until July 27. Dreher said they expect to have a draft released next year.