The Shanghai Expo wraps up on October 31 after six months of energy-devouring fairs and exhibitions, but the US Pavilion will leave behind zero in the way of a carbon footprint – thanks to a hefty investment in three Chinese sustainable-development projects.  The Gold Standard Foundation, which verified the offsets, says the deal shows that they haven’t let the global recession get them down. 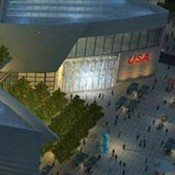 The Shanghai Expo wraps up on October 31 after six months of energy-devouring fairs and exhibitions, but the US Pavilion will leave behind zero in the way of a carbon footprint – thanks to a hefty investment in three Chinese sustainable-development projects.   The Gold Standard Foundation, which verified the offsets, says the deal shows that they haven’t let the global recession get them down.

4 October 2010 | If one were to piece together a profile of the typical buyer of Gold Standard-verified voluntary carbon credits, it would look something like this: European for-profit firm financing low-carbon sustainable development in pursuit of corporate social responsibility (CSR) commitments.

At least 65 percent of Gold Standard buyers in 2009 fit that description, according to data collected by Ecosystem Marketplace and Bloomberg New Energy Finance. This buyer type was indeed the voluntary carbon market’s bread and butter until 2009, when the economic downturn pummeled corporations’ discretionary spending on offsets.

Now, as the economy and low-carbon finance come back online, Gold Standard Chief Executive Adrian Rimmer suggests that they and other voluntary market players have “taken advantage of the market hiatus” to reemerge with a fresh eye on new buyers, project locations and markets for ecosystem services.

As a case in point, the Gold Standard hosted a side-event at the recent Carbon TradeEX America conference in Chicago to examine US demand for international offsets and afterward discussed with Ecosystem Marketplace its latest high-profile – and non-traditional – buyer of Gold Standard credits, the Shanghai Expo’s USA Pavilion and Alcoa Foundation.

“I think the purchase is indicative of an expanding interest in international offsets from US buyers,” says Lisa Hodes Rosen, the Gold Standard’s General Counsel and Director of US Markets. “It’s indicative of the US sentiment toward international credits that is perhaps changing for the better.”

Rosen and side event panelists are not alone in their quest to carve out a new niche among voluntary carbon buyers who, according to TerraPass Vice President Erin Craig, are “returning to the marketplace in some quantity.”

Much as the Gold Standard is turning to new shores to reinvent its market base, capturing the interest of these returning and new voluntary carbon buyers may force surviving offset providers to think outside of the box to stay afloat in the fragmented marketplace.

Everything Old is New Again

This year’s State of the Voluntary Carbon Markets report found that US-based buyers dominated global market demand for voluntary carbon credits in 2009, particularly those credits sourced from projects in their own backyard.

Gold Standard hopes to reshape US buyers’ propensity to buy credits from close to home, and this week saw a significant victory as organizers of the USA Pavilion at the Shanghai Expo announced that the all US emissions from the international showcase would be offset with China-based Gold Standard credits.

“In the past, international credits have gotten a bad rap among US buyers,” Rosen explains, “but as the US market becomes more educated about what constitutes a high-quality offset project, that will benefit international projects.”

The credits are sourced from three Chinese projects, including two projects in China’s northwest Gansu Province and one project in the Jiangsu Province on the east coast. According to the Gold Standard registry, the eastern landfill gas project was developed by South Pole Carbon, while Climate Bridge developed Gansu’s micro hydro project and the Pavilion’s wind credits are attributed to project developer Camco.

Lying between the Tibetan and Loess Plateaus and bordering Mongolia, the Gansu Province is far removed from the American heartland. Given that Gold Standard’s top project locations are China, India and Turkey, why bother approaching the United States’ historically introverted market for voluntary carbon?

Rosen says it’s simple – as US Environmental Protection Agency (EPA) regulations and rules encroach on the US voluntary carbon market’s favored project types (like landfill gas), buyers may have little choice but to turn to international sources for truly additional carbon offsets.

“When you strip away agriculture or biomass or forestry due to regulation and emerging programs, what are you really left with?” Rosin asks. “If the EPA becomes more aggressive with regulation, buyers will have no choice but to look overseas, so international credits are going to be very critical to the US market.”

According to Rosen, even the Gold Standard is hedging its bets in this uncertain market – by considering a more substantial number of US-based Gold Standard projects. “We want to make sure that US communities understand how carbon finance can benefit them and help improve their livelihood in a sustainable way,” Rosen explains.

She concluded with a theme that echoed throughout the conference as attendees trialed a new pitch: “Even if you don’t believe in climate change, everyone in the US should get on board with creating jobs,” she remarks. “Everyone can get on board with stimulating the local economy.”

“If you happen to be saving the planet at the same time, then everybody wins.”

What Doesn’t Kill You…

In contrast to the Gold Standard’s optimistic outlook for market growth in the US, the conference’s abysmally low attendance sparked among other participants a “dour mood” as one panelist pointed out.

This was attributed in part to the US Senate’s failure to produce climate legislation in the current session – the same thing that some veteran US market players pointed to as an unexpected driver behind revived demand for their voluntary carbon credits.

Annika Colston, Vice President at Blue Source, noted that the US-based project developer had seen an uptick in its voluntary sales “as of right now, in the recent past and the foreseeable future.”

In addition to a fall-off in the number of active credit suppliers in the US market, Colston thinks the increased sales volumes among surviving companies “may be partly due to the lack of momentum federally and some large CSR buyers standing up in defense of these programs, adding that Blue Source has “seen some pretty significantly priced sales for multi-year contracts.”

Even so, some attendees were disheartened by the absence of potential large buyers for credits at the event, which was populated mostly by offset providers, market infrastructure providers and a slew of media partners.

This was no surprise to those who assumed the low turnout reflects the last year’s trend of market contraction and consolidation. To market participants with potentially unreasonable expectations, however – like anticipating a showing of 800+ attendees ala 2009’s event – Craig says it might be time to revisit suppliers’ outlook for growth in the voluntary carbon marketplace.

“I don’t think [demand] is something that necessarily accumulates like a snowball,” Craig explains. “In order for companies to get the marketing and CSR benefits from offsets for reputation purposes – which is part of the reason that companies are offsetting – they can’t just do the same thing year after year.”

“Because companies that are offsetting have been doing it for a while,” she continues, “we definitely see a little bit of a revolving door where people offset for a while, get the benefits and then move on to something else.”

Please see our ReprintÃ‚Â  Guidelines for details on republishing our articles.