Louisiana’s disappearing coastlines are propelling renewed efforts to preserve the areas that can be saved before it’s too late. A new study finds the carbon markets could potentially contribute up to $1.6 billion toward this effort, if the offsets generated by wetlands restoration projects are eventually welcomed into the compliance markets. 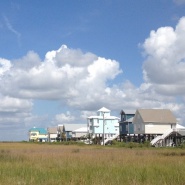 This article was originally published on the AnthropoZine. Click here to read the original.

12 March 2015 | Since the 1930s, Louisiana has lost an area of wetlands equivalent to the size of Delaware, and it continues to lose a football field of wetlands every hour. If current loss rates continue, by the year 2040 more than one million acres of wetlands will be gone – and the carbon stored in these ecosystems will be released into the atmosphere.

But what if there is another way? While a large degree of wetland loss in the Gulf of Mexico is inevitable due to the dual forces of land subsidence and sea level rise, project developer Tierra Resources and utility Entergy are optimistic that wetland restoration is possible in some areas. Tierra Resources estimated that Louisiana has the potential to produce 1.8 million carbon offsets per year, or almost 92 million offsets over 50 years, according to the Louisiana Blue Carbon study.

Wetland restoration in Louisiana could be worth between $540 million and $1.6 billion dollars over the next five decades. The study uses $4.4 per tonne as its lowest estimated price – based on the average historical price of a voluntary carbon offset developed under the American Carbon Registry (ACR). The study featured $10.8 per tonne as the high price – based on the higher value of offsets sold into compliance markets such as California’s cap-and-trade system.

Ultimately, the hope is that wetland projects will become eligible for the California market so that the Louisiana-based offsets can be traded there, said Brent Dorsey, director of environmental programs at Entergy. But the Golden State requires a 100- year project lifespan for land-based projects, compared to ACR’s 40-year timeframe, so additional hurdles remain, observed Sarah Mack, President and CEO of Tierra Resources.

Entergy has advocated and supported market-based solutions to environmental risks since 1998, when it became involved in the initial development of the Regional Greenhouse Gas Initiative, the carbon trading program of nine Northeastern states, some of them home to Entergy facilities.

Using its Environmental Initiatives Fund, Entergy financed Tierra Resources’ study of wetland restoration techniques and development of a new blue carbon accounting methodology under ACR. The Louisiana Blue Carbon project was a partnership between Entergy energy, Tierra Resources, and the Climate Trust. The goal was to develop opportunities for financially viable wetland offset projects in Louisiana.

The methodology that was developed focuses on four million acres of wetlands in the coastal zone of Louisiana, with a small amount of coast in Mississippi and Texas. They focused on scalable restoration methods that show commercialization potential as wetland offset projects to determine the carbon impact of incorporating prevented wetland loss in carbon accounting, determine the state’s offset potential, and what the financial estimates are of the blue carbon.

Tierra Resources reviewed restoration techniques featured in the “Louisiana’s Comprehensive Master Plan for a Sustainable Coast ” and researched additional restoration techniques, wetland assimilation and mangrove planting. The company then evaluated the commercial wetland offset potential for long-term enhancement of wetlands, scalability, and cost effectiveness. The Master Plan used a 50-year projection for the future of wetlands in Louisiana, which was also employed by Tierra Resources as the basis for its analysis to determine annual offsets and value, as well as long-term potential.

Raised houses in the bayou.

The study evaluated different types of wetland restoration, including mangrove planting, wetland assimilation – the introduction of treated municipal effluent into impounded and degraded wetlands to provide freshwater and nutrients for restoration purposes, and river diversion – use of new channels and/or structures to divert sediment and freshwater from the Mississippi and Atchafalaya Rivers into adjacent basins. The latter two techniques offer opportunities to stack carbon offsets with other mechanisms such as water quality credits, if those markets develop. Wetland assimilation offers the greatest net offset yield per acre: about seven tons of carbon for forested wetlands.

The challenges facing wetland restoration as a viable mechanism for carbon sequestration include the high costs of wetland restoration, which may surpass the value of carbon finance in projects, which necessitates partnering projects with more traditional funding pathways.

Mack outlined some of the policy options available to encourage wetland restoration including: “allowing the use of federal funds alongside carbon finance; environmental credit stacking, eligible types of conservation easements, rules and processes for project aggregation, and crediting period length for wetland restoration. Additionally, establishing funding pools to allow wetland project development to scale up and meet future carbon demands in the compliance market would benefit future wetland restoration projects.”

In 2010, Entergy sponsored a study that found the cost-benefit ratio for wetland restoration is three to one, meaning for every three dollars invested in wetland restoration a dollar is gained in risk avoidance. Using this study as a baseline, Entergy partnered with Tierra Resources to explore additional benefits, such as hunting, fishing, water filtration, and other ecosystem services that could be gained by restoring wetlands, as well as carbon sequestration benefits.

The total potential benefit of just restoring coastal wetlands in Louisiana was determined to be between $400 and $1 billion. If prevented wetland loss, that is the prevention of wetlands from reverting to, or turning into, open water, is included in the carbon accounting, an additional $140 million to almost $630 million may be earned by Louisiana wetlands.

The case for preventing wetland loss is not just environmental, according to large oil and gas corporations such as ConocoPhillips and Shell currently involved in blue carbon projects. Dorsey highlighted an additional risk associated with wetland loss: “Existing wetland owners, if the wetlands convert to open water, they lose all title to that property including the mineral rights. That is some of the economic push for some of these folks to be involved with blue carbon.”

Entergy serves Louisiana, among other southern Gulf Coast states, as an energy generator and transmitter and is vulnerable to adverse weather events that may strike the area as Hurricane Katrina did in 2005, he said.

“Entergy is wed to their service area, we don’t have the luxury of pulling up poles and power plants and moving, we are a real member of our service area,” he said. “Looking at this from a risk-management perspective, a storm could wipe out transmission and distribution facilities and have significant economic impacts to our customers.”

Katy Sater is a research assistant in Ecosystem Marketplace’s Carbon Program. She can be reached at [email protected]