From the moment Donald Trump won the election as President of the United States, analysts warned that any effort to pull out of the Paris Climate Agreement would isolate him and his country in global trade talks. Now, as the president sticks to his 2020 pull-out date, trade isolation is becoming a very real – and even probable – possibility. 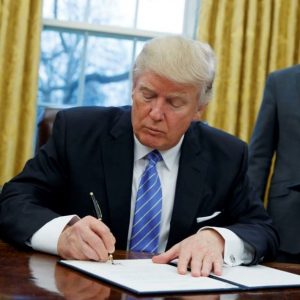 8 February 2018 | I was in Marrakesh, Morocco, for global climate talks when Donald Trump won the US presidential election, and within hours a consensus emerged: the Paris Agreement was as good a deal for the United States as it was for the rest of the world, and only a fool would “cancel” it, as Donald Trump had promised to do while on the campaign trail.

“It is, in effect, a bit of a trade agreement,” said former Canadian climate negotiator Peter Graham, pointing out that the United States risked isolation if it abandoned the treaty.

“Mr. Trump will soon learn that Climate Change is a geopolitical issue of major proportions,” added Alden Meyer, Director of Strategy and Policy for the Union of Concerned Scientists – a sentiment echoed by diplomat Yvo de Boer and nearly a dozen other delegates.

But Donald Trump still says he’ll pull out of the Agreement in 2020 – the year it comes into effect, and the earliest year he can do so. It’s a promise he’s sticking to even as countries from Asia to Europe to Latin America are embedding climate compliance into trade agreements, and despite the fact that his own Commerce Secretary, Wilbur Ross, says he wants to re-join the Transatlantic Trade and Investment Partnership (TTIP) that Barack Obama negotiated and Donald Trump abandoned.

But re-joining the trade agreement might be impossible unless the United States reaffirms its commitment to the Paris Agreement, as both EU Trade Commissioner Cecilia Malmström and French Foreign Affairs Minister Jean-Baptiste Lemoyne made clear last week, in statements that an official Commission spokesperson reiterated for Climate Home News.

The story continues below, but you can also click here for audio coverage from Marrakesh:

The Trump administration will surely cry foul if the Europeans use trade barriers to enforce the Paris Agreement, but conservative economists like the University of Chicago’s Steve Cicala have long advocated “border adjustments” that “tax goods arriving at the US based on the carbon content.”

He made that statement in a panel discussion with former US Congressman Bob Inglis, himself a staunch Republican, in 2014, and the European Union has already worked Paris Agreement conformity into a recent trade agreement with Japan, and it’s in the process of doing so in current negotiations with the Mercosur countries (Argentina, Brazil, Paraguay and Uruguay).

The Canadian Government has taken a similar stance, and leading US Senators like Bernie Sanders, Kirsten Gillibrand, and Elizabeth Warren have argued that social parameters should feature more prominently in the renegotiation of the North American Free Trade Agreement (NAFTA).

Laurens Ankersmit, EU Trade & Environment lawyer at ClientEarth, told the Climate Action news service that he was skeptical of the Commission’s commitment.

“I am not convinced of the Commission’s commitment to really make that meaningful,” he said. “The EC is primarily concerned with trade liberalisation.”

Environmental NGOs, however, have begun supporting the idea.

“From the EU to Canada, a growing consensus is emerging that trade deals will fail workers and communities unless they incorporate and enforce the Paris Climate Agreement goals,” said Sierra Club Global Climate Policy Director John Coequyt. “By ignoring these demands, Trump further isolates the U.S. on the world stage, exposes workers to job losses, and turns a cold shoulder to families impacted by the climate crisis.”