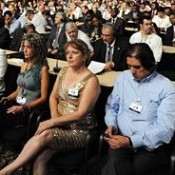 This article was originally posted on the UNFCCC website.   If you choose to republish, please reference the original.

21 March 2010 | BONN | The UN Climate Change Secretariat has published a document on the compilation of information on nationally appropriate emission reduction actions of developing countries, as mandated by governments meeting at the UN Climate Change Conference in Cancíºn, Mexico, in December of 2010. The document can be found here.

This follows the posting of a document on quantified economy-wide emission reduction targets by developed countries, also called for at the UN Climate Change Change Conference in Cancíºn.

In Mexico at the end of last year, governments agreed to formally list under the UNFCCC the emission reduction targets and actions which they had already announced in 2010, and they agreed to build a comprehensive system of mutual accountability towards these goals.

As part of this drive towards accountability, a workshop on assumptions and conditions related to the attainment of quantified economy-wide emission reduction targets by developed country Parties, will be held in Bangkok on Sunday, 3 April 2011, preceding the main UNFCCC Climate Change Negotiations in Bangkok (5 to 8 April 2011). A workshop on nationally appropriate mitigation actions submitted by developing country Parties, underlying assumptions, and any support needed for implementation of these actions will be held on Monday, 4 April 2011 in Bangkok. The two documents now published will provide an important basis for discussions at the workshops.

In addition, an expert workshop on the Technology Mechanism will be held in Bangkok from 4 to 5 April 2011.   This workshop will look into practical issues such as what the network should look like, who should be included in it, and how effective participation of relevant institutions be ensured.

Information on the three workshops in Bangkok can be found here.

All of the workshops, plenary sessions and press briefings at the UN Climate Change Negotiations in Bangkok will be webcast live and on demand.

With 194 Parties, the United Nations Framework Convention on Climate Change
(UNFCCC) has near universal membership and is the parent treaty of the 1997 Kyoto Protocol. The Kyoto Protocol has been ratified by 192 of the UNFCCC Parties. Under the Protocol, 37 States, consisting of highly industrialized countries and countries undergoing the process of transition to a market economy, have legally binding emission limitation and reduction commitments. The ultimate objective of both treaties is to stabilize greenhouse gas concentrations in the atmosphere at a level that will prevent dangerous human interference with the climate system.