Entering into a payments for watershed services program is more akin to getting married than it is to buying a normal product, and participants often face an array of hopes and fears at the outset. Here’s how deep-pocketed flower-growers along the shore of Kenya’s Lake Naivasha and subsistence farmers in the hills 40 kilometers away finally tied the knot – and what it means for similar transactions around the world. 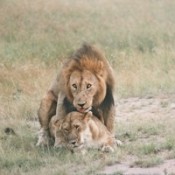 This is the third in a four-part series examining the interplay between economy and ecology in the Lake Naivasha Watershed.

15 March 2013 | NAIVASHA | Kenya | It’s almost a year since that day in May, 2012, when Abigael Tamooh drove James Waweru to the steep slopes of Kenya’s Abardares Hills

“We wanted to show him directly how the payments for watershed services (PWS) were changing farmers’ behavior,” she says. “Because that’s the only way we’re going to get buy-in.”

Waweru runs the Flower Business Park Management Ltd., which coordinates activities of several flower-growers along the lake’s shore. He says he was sold within ten minutes of getting out of the car.

“The difference between those who subscribed to PWS and those who didn’t was quite apparent,” he says. “But then I had to convince our board as well.”

It’s a decision-making process that will be replicated around the world as cash-strapped governments turn to payments for ecosystem services (PES) in general and PWS in particular to promote good land stewardship – but it actually began four years earlier, when WWF and CARE started looking for partners in their ground-breaking PWS program.

With commitments totaling US $10,000, WWF and CARE set a target of 500 participating farmers. That would mean just $20 per farmer – not enough to cover the cost of the trees and Napier grass, but enough to provide a concrete incentive.

CARE and WWF came up with standardized criteria to make sure they were targeting those farmers most likely to deliver results, but rather than reach out to farmers themselves, they reached out to local Water Resource User Associations (WRUA).

“We wanted to make this sustainable,” says Peter Muigai, who was working with CARE at the time. “That meant getting local people involved in the administration of the program as soon as possible.”

One of the first people he approached was David Mbugua, Secretary of the Upper Tarusha Water Resource User Association (UTWRUA).

“They asked us to coordinate the outreach and also the verification and validation,” says Mbugua. “In exchange for this, they offered us 15% of the income from payments to cover our costs.”

Some of the criteria were based on hydrology: because steep land is more susceptible to erosion, for example, they restricted the first tranche of farms to those on gradients steeper than 20 degrees.

Other criteria were socioeconomic: to prevent inadvertently incentivizing more degradation, they required the land already be cultivated; and to make sure the people they targeted had a vested interest in the success of the project, they required that all participating farms either me managed by the owner or have the full mandate of the owner.

To create a baseline, they eliminated land that already had conservation structures like terraces and retaining walls.

The Proposition and the Uptake

To prime the pump, WWF and CARE offered to provide trees and Napier grass to farmers free of charge and show them how to install the grass in strips, with the trees behind it. If farmers implemented it correctly, they’d be rewarded with vouchers worth $17 that they could use for any agricultural inputs they wanted.

Of more than 700 farmers in both the Upper Tarusha and Wanjohi catchments, 565 agreed to implement the changes.

The program was slated to begin in 2008, but a devastating drought prevented farmers from planting the grass. By 2009, however, the rains were back and the project was underway.

By early 2010, 470 of the 565 participating farmers had upheld their end of the bargain – but then came another surprise: when they went to collect the money from the buyers, only one of them – LNGG – honored its commitment.

“Once we realized we’d only get the one buyer, we were afraid of losing credibility with the sellers,” says Muigai. “So we went to the donors, and they agreed to cover any shortfall, so that we could still maintain the confidence of the farmer as we continue to negotiate with more buyers.”

The Dutch Directorate General for International Cooperation (DGIS) and the Danish International Development Agency (DANIDA) covered the shortfall, and the project continued. In late 2010, Muigai took a team from LNGG to the upper catchment to see the steep slopes and hear their plan.

Then came yet another setback: CARE announced that it didn’t have enough money to continue after 2010, so it was up to WWF to carry the load from there on in.

“Fortunately, CARE had laid a good foundation, and we were able to keep going without too much additional funding,” says Daniel Koros, a 20-year WWF veteran who came in to oversee the project in 2011. “We were able to hire Peter, and he continued doing for us what he had been doing for CARE.

Also in 2011, the Lake Naivasha Water Resource Users Association (LANAWRUA) hired Abigael Tamooh as a technical officer. Part of her job is to persuade flower-growers, hoteliers, and geothermal power providers to join the program – which isn’t always easy.

“LANAWRUA members use more water than the farmers in the catchments do, but they also pay nearly all the water fees,” she explains. “They often don’t see why they should be paying more on top of what they already pay.”

The FBP’s Waweru encountered that objection when he went to pitch the program to his board.

“The main objections were that we already paid for water charges – and that’s an objection I agree with,” he says, adding that several members argued that LANAWRUA should only participate if the upper-catchment WRUAs agreed to bring unregistered water users into the system. “But in the end, we decided that if we waited for everyone to come in, it wasn’t going to happen. So in June – one month after our tour – we made our first payment unconditionally.”

Tamooh, meanwhile, is still working on the other potential buyers.

“Hotels are more concerned with the appearance of the water than with actual quality,” she says. “But the invasion of water hyacinths has shown that quantity and quality go hand-in-hand.”

Another potential big buyer is the Kenya Electricity Generating Company (KenGen), which runs geothermal plants that depend on clean subterranean waterways.

“They are open to the idea, but they also have a very bureaucratic decision-making structure,” says Tamooh. “But to achieve the scale we need, they’d have to join at some point.”

Part Three:
Tying The Knot: Buyers And Sellers In Kenyan PWS examines the challenge of attracting – and keeping – buyers and sellers.