Amidst mixed reports on the state of global carbon markets, the International Emissions Trading Association (IETA) and the International Carbon Reduction and Offset Alliance (ICROA) united their organizations in a display of confidence in the future role of voluntary carbon offsetting – as a tool for private sector climate action and a complement to regulation. 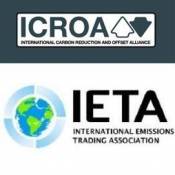 Amidst mixed reports on the state of global carbon markets, the International Emissions Trading Association (IETA) and the International Carbon Reduction and Offset Alliance (ICROA) united their organizations in a display of confidence in the future role of voluntary carbon offsetting – as a tool for private sector climate action and a complement to regulation.

3 June 2011 | In yet another show of emerging camaraderie between the voluntary and compliance-based carbon markets, the International Emissions Trading Association (IETA) and the International Carbon Reduction and Offset Alliance (ICROA) today announced the integration of their two market-facing associations.

IETA, a carbon trade association with 160+ members from industrial and carbon market sectors, will incorporate the ICROA program into its activities. ICROA’s program focuses on standard-setting and best practice among voluntary carbon offset retailers. According to IETA, its aim is to “get back into the voluntary market space in a major way.”

“The voluntary market was a very important part of the IETA mission from the very start twelve years ago, when we saw a non-compliance world where everything was being done on a voluntary basis,” IETA President and CEO Henry Derwent explained to attendees of the 2011 Carbon Expo conference.

“While the market moved from one jurisdiction to another adopting a compliance system, we never lost our interest in the work that was being done outside of compliance – especially the corporate social responsibility (CSR) activities of our members who never had an opportunity to participate in compliance activities.”

Derwent said he hopes the integration will bring together players from both associations to provide an even stronger base for the already expanding voluntary carbon market.

As part of the return to its voluntary roots, IETA will incorporate all ICROA members into IETA and announced plans to revive a voluntary carbon market working group for IETA members. Derwent assured audience members that ICROA will nevertheless retain its own identity, even as a part of IETA. That means ICROA will maintain its existing programs, including administering the ICROA Code of Best Practice which member companies adopt and must report against annually.

The announcement came one day after Ecosystem Marketplace and Bloomberg New Energy Finance launched the State of the Voluntary Carbon Markets 2011 report, which tracked a record volume of voluntary carbon credit transactions – much of which consisted of private sector investments in forest conservation. In contrast, the World Bank ´s State and Trends of the Carbon Market 2011 report – also released this week – revealed stagnation and uncertainty in the compliance markets, partly due to a lack of motivation among developed countries to pursue national market-based solutions.

In looking toward the post-2012 world and the possible fragmentation of compliance-based emissions markets, IETA sees a stronger role for the voluntary market and for organizations that provide assurance about environmental quality and aim to harmonize offsetting practices.

“In a small way this is a very significant date in the relationship between voluntary and compliance markets,” Derwent remarked.

ICROA spokesperson and ClimateCare Executive Director Edward Hanrahan says the next step for the market is to scale up from its comparatively small size to have a bigger impact on global greenhouse gas emissions – and says the integration of IETA and ICROA is key.

“We feel like we’ve put in place the first steps to bringing a professional outlook to the market,” Hanrahan says. “It’s important that the market continues to grow and achieve scale and working with IETA enables us to leverage all of their great work to that end.”

Molly Peters-Stanley is the Voluntary Carbon Associate in the Ecosystem Marketplace’s Carbon Program. She can be reached at [email protected]
Ã‚Â
Please see our Reprint Guidelines for details on republishing our articles.