Greenhouse-gas emissions are spiraling upwards, in part because few of us realize how many tons we’re responsible for and what we can do about it. To fix that, the United Nations today launched a new web portal incorporating both a carbon-footprint calculator and offset-purchase mechanism. 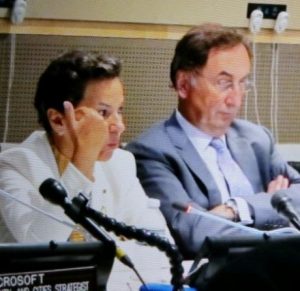 22 September 2015 | NEW YORK| “Everything we do has a consequence,” said Christiana Figueres, Executive Secretary of the United Nations Framework Convention on Climate Change (UNFCCC) on the second day of Climate Week NYC, as she unveiled the UNFCCC’s latest tool in the global effort to slow climate change.

“We are not treading lightly on this planet,” she continued. “Go through your day and everything you do, ask yourself: I wonder what the carbon footprint is of what I’ve just done? And then, you can actually figure this out. It’s not that difficult.”

And with that, she unveiled Climate Neutral Now, a UNFCCC web portal that makes it possible for individuals to both calculate their greenhouse-gas emissions (or “carbon footprints”) and then offset their emissions by purchasing Certified Emission Reductions (CERs) generated under the Kyoto Protocol’s Clean Development Mechanism (CDM).

It’s the second major initiative this year targeted to individuals rather than to corporations, the first being Stand for Trees, which offers offsets generated by saving endangered rainforest and planting trees. It gained significant coverage with a viral music video by Prince Ea that garnered more than 20 million views in the first day and resulted in 16,000 tonnes of CO2 offset in the first two days.

The Climate Neutral Now launch follows this vein but includes 26 project types instead of two, and while Stand for Trees sells its offsets at a standard price of $10 per metric ton of carbon dioxide, Climate Neutral Now lets developers set their own prices – which currently average between $2 and $3.50 but can fluctuate over time, according to CDM Executive Board Vice Chairman Lambert Schneider.

The new platform marks a turning point for the UNFCCC’s treatment of CERs, which had been developed for institutional emitters seeking to meet legal emission limits. Prices soared above $30 per ton in the mid-2000s but plunged as negotiators failed to reach a global, binding emission-reduction agreement. The seeds for this launch were planted at year-end climate talks in Warsaw two years ago, when negotiators agreed on the need to “promote the voluntary cancellation of CERs without double counting to help close the pre-2020 ambition gap.” (1/CP.19, para 5(c)).

However, there are already voluntary carbon offset transactions – completely separate from CDM-generated CER ones. When asked how this might affect voluntary project developers already concerned about limited demand, Schneider replied, “We are aware that the voluntary global offset market is quite small, and what we really hope for with this platform is to give it momentum. I think this platform raises it to a different level.”

What those marketing platforms might be – specifically – are still up in the air. Yet, like many others, he views the upcoming Paris climate talks (COP 21) as an opportunity to showcase the new platform.

“One of the possibilities – I don’t know where we are on this – is at COP21, to be present at airports and gates, etc. to spread the news to all delegates, so then they can bring this home,” he said.

The initiative doesn’t add to the existing supply of offsets, but merely adds a marketing and distribution element to offsets already in existence. So far, the voluntary market seems to be welcoming its arrival.

“We all have an opportunity as a market to take advantage of any momentum created by the UNFCCC’s Climate Neutral Now campaign,” said Sarah Leugers, Director of Marketing and Communications at The Gold Standard, which generally covers the voluntary market. “Though focused on CERs, their visibility should significantly push the offsetting agenda.”