The world has agreed that tropical rainforests need protection, so the multi-billion dollar REDD+ program is on its way. The challenge is its practical implementation. DMCii’s Prof. Jim Lynch explains why satellite surveying could do for the 21st century carbon trading economy what seismic surveys did for 20th century oil and gas. 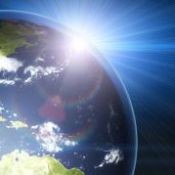 The world has agreed that tropical rainforests need protection, so the multi-billion dollar REDD+ program is on its way. The challenge is its practical implementation. DMCii’s Prof. Jim Lynch explains why satellite surveying could do for the 21st century carbon trading economy what seismic surveys did for 20th century oil and gas.

July 16 2012 |     Carbon projects that reduce greenhouse gas emissions from deforestation and forest degradation (REDD) can save rainforests and slow climate change by keeping carbon locked in trees, but this mechanism and its sibling, REDD+, can only scale up if investors will know how many trees there are, and how much carbon is stored within them and whether this carbon is staying put, year on year.

Current methodologies being advocated within the United Nations require the use of forest audits based on traditional forestry management methods of the developed world, but these are simply too expensive to work in the developing world. The Democratic Republic of Congo, for example, has more than 100 million hectares of inaccessible rainforest, and the country doesn’t have the resources to survey this from the ground in a cost-effective manner, let alone quantify the results into a standardised format to be cross-checked against forest stocks elsewhere.

Lessons From The Energy Sector

Perhaps the emerging carbon-trading economy can take a lesson from the oil and gas economy that dominated the previous century. Sinking exploratory wells represented an impossibly costly way to explore. So a standard technological solution emerged to discover and quantify oil and gas stocks: seismic surveys. Low-frequency sound waves are propagated into promising geological sites and the time taken for them to reflect back is employed to build up a picture of oil and gas deposits. The technique began with wildcatters in the 1920s exploding dynamite sticks; today it involves carefully planned networks of seismic sources and geophones to build up a three-dimensional map of reservoir architecture, with raw acoustic results processed via sophisticated algorithm chains and skillfully interpreted. Modern seismic surveys are employed not only to find new wells but also tracking fluid-front movement to trace a reservoir’s depletion over time.

What is the equivalent technological solution for forest monitoring? Earth observation. The only way REDD+ can be made to work on a global scale in a truly open, transparent way is satellite imaging. That’s why I’m working with satellite imagery and services provider DMCii in the UK to develop standardised information products for forest monitoring, tailored to the requirements of REDD+ as well as comparable international forest monitoring schemes – such as the EU’s Forest Law Enforcement, Governance and Trade (FLEGT) Action Plan, ensuring countries importing timber to Europe are logging on a legal and sustainable basis.

What Satellites Can Deliver

Earth observation can contribute to two aspects of the forest monitoring problem. Firstly, as a means of ascertaining where all the trees are, and how many of them there are. Satellites’ wide area view enables a highly-accurate census to be made. Then comes the stage of processing the imagery to make biomass estimates and gain a measurement of the carbon stocks bound up in them – seeing the carbon for the trees – and then, just as importantly, to estimate carbon fluxes: how that carbon stock is changing over time.

The last half-century of Earth observation has demonstrated that it is not the individual remote sensing image but a sequence of images over time that gives the most added value. When it comes to tropical rainforests this is especially true: one can never have enough data about these vast expanses, possessing their own self-generating climate systems – repeated monitoring is important simply to catch gaps in clouds. Then such gaps can be mosaiced together to build up a complete picture.

We’re not starting from a blank page. The rapid development of satellite-based precision agriculture offers a model to learn from. Satellites are increasingly – and lucratively – being employed to monitor crop growth to guide the most-efficient application of fertiliser and pesticide for optimal yield. Many of the methods and algorithms originally developed for precision agriculture provide a measurement of photosynthetic activity can be also be applied to forest monitoring.This is very exciting – with the right models and algorithms we can analyse carbon pools for different climates around the world.

How We Do It

But won’t monitoring from space be astronomically expensive? Not necessarily. DMCii has built a business in selling imagery from the Disaster Monitoring Constellation, a fleet of separately-owned and collectively-managed satellites performing medium-resolution Earth monitoring. As the satellites, built by the UK’s Surrey Satellite Technology Ltd. are affordable, and the data is too.

Of the users around the globe making use of DMCii data products, one of the most notable is Brazil, as one of the few forested developing nations to establish an annual forest audit. Brazil is also one of the inspirations for REDD+, having cut its deforestation by half in the last decade and a half. Both achievements are based on the use of satellite data.

Brazil’s space agency the National Institute for Space Research (known by its Spanish initials as INPE) approached DMCii in 2005 to begin purchasing DMC imagery. Today DMCii’s contribution is core to Brazil’s forest monitoring programme, having moved beyond regular land cover mapping to active guidance of enforcement efforts. The distinctive patterns of deforestation have become familiar sights – ‘fishbone’ lines of clearing extending from a main road as the transportation route, or alternatively a river system.

Early on, in my role with the OECD Sustainability Agency, we could challenge the authorities with this irrefutable evidence, and help guide fact-based policy. In addition to starting to brake deforestation rates, Brazil has also set up new national parks, indigenous reserves and sustainable logging zones. It’s a template for what REDD+ could accomplish on a broader scale– and all down to satellites.

The precise nature of DMCii information products and services for REDD+ and related forest monitoring activities are still to be determined. We envisage two main classes of user: firstly, people mainly interested acquiring auditing information in a quick, digestible format, such as financial investors. Secondly, the national governments themselves, who will want to demonstrate their effective reduction in emissions clearly with a high degree of quality and precision, so they can be rewarded for their efforts. We’d also supply the associated measurement and management systems – based on standard geographic information systems (GIS) –to employ the data.

Theoretically the information products would be data-neutral; in other words we could employ free imagery from government satellites such as the US Landsat for annual forest surveys, which is the minimum frequency that REDD+ certification is likely to require. But, once you consider the billions of dollars set to be pledged for REDD+, then the case is clear to acquire additional paid-for data to step up the frequency and accuracy of satellite observations. In the case of particular regions at risk then the frequency of acquisitions could reach daily revisits using the DMC satellites. Because they operate in a constellation, their acquisition opportunities are not constrained by the fixed orbit of a single satellite, which might take weeks or months to return to a given target.

Last year’s addition to the DMC, the NigeriaSat-2 satellite, offers very high resolution 2.5 m imagery, that is potentially capable of surveying individual REDD+ projects in detail (incidentally giving Nigeria a superior imaging capability to SSTL’s homeland of Great Britain). The UK and SSTL has also announced plans for a new generation of NovaSAR small radar satellites, able to perform observations through clouds or at night, and sensitive to complementary environmental parameters such as leaf area index and soil moisture.

DMCii also acquires additional regional forest monitoring capabilities with third party specialists. So we wouldn’t always perform mapping or ground truthing ourselves, but are active in establishing regional partnerships to do just that. In May, a DMCii led consortium won a place on the UK Department for International Development (DfID) Forest Governance Markets and Climate (FGMC) Framework Agreement meaning that we will be able to bid for projects to monitor forest governance and deforestation globally. The multidisciplinary consortium, known as inFORm, comprises commercial and academic partners with skills such as forest mapping, carbon accounting, timber tracking, policy development and broad ranging Earth Observation technologies, allowing a holistic approach to tackling deforestation.

For me, one of the strengths of satellite products is that for all the data they contain, they can typically be understood by everyone, not just forest specialists – regional politicians to national media to village headmen. If you present people with clear and accurate information about their national resources, they can then make informed decisions about their future exploitation. In the past satellite images have helped motivate Brazilian politicians to take action and helped guide public opinion too.

It is clear that the fruits of past development activities have not always been fairly shared. I was in Ghana in 2010 and I went to villages well away from Accra and asked them what they wanted most. Some electric lights so we’re not in darkness every night was the answer – and running past their village were thick power lines on massive pylons.

REDD+ needs to be fair if it is going to be truly sustainable. Satellite imagery can help establish a level playing field of information, showing where the trees are actually placed in areas of contested land ownership, and serving as a basis for organised action on the ground, such as surveying and enforcement activities.

Through its staff and parent company SSTL, DMCii has a promising record in knowledge transfer; it has worked with customer nations such as Egypt, Turkey and Nigeria to not only deliver satellites but the beginnings of full national space programmes along with them. The same kind of knowledge sharing, to make REDD+ a bottom-up initiative that local populations have a true stake in, will be crucial.

While satellites offer a technical solution to the challenges of implementing a carbon trading economy based on preserving the tropical rainforests – just as seismic surveys proved to be the technical foundation of the expanding oil and gas industry – the political and social factors inherent in making REDD+ a reality will decide whether it succeeds or fails.

Trained in industrial chemistry and soil microbiology, Professor Jim Lynch OBE has served as Chief Executive of the UK government’s executive agency, Forest Research, Co-ordinator for the OECD Programme on Biological Resource Management and currently sits on the Board of the European Forestry Institute and Africa’s Council for the Frontiers of Knowledge. As Distinguished Professor of Life Sciences (Emeritus) at the University of Surrey, Prof. Lynch has begun work on a new project to develop forest monitoring information products for DMCii, a subsidiary of University of Surrey spin-off company Surrey Satellite Technology Ltd (SSTL).