You can’t separate people from climate change. We caused it, and we will suffer from it. The UK’s weather service, the Met Office, recently tried to summarize the interplay between people and the planet in one wall poster, and the result is a stark reminder of the fact that we now live on a managed planet. 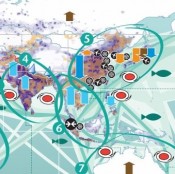 This piece originally appeared on The AnthropoZine. The views are those of the author, and not of Ecosystem Marketplace. You can view the original here.

22 July 2014 | Earlier this year,  the US Climate Assessment  warned of parched prairies and flaming forests if we don’t reel in climate change right now. Sixteen retired US admirals and generals then  warned that droughts and other climate disruptions were about to make the world a very dangerous place. Now the  United Kingdom’s weather service, the Met Office, has tried to put the basic science in a simple, poster-sized product called the Human Dynamics of Climate Change, which you can download  here  (PDF,  12 MB). Supplementary information is also available  here  (PDF,  629 kB).

The map is actually a teaser to and a summary of a much more detailed technical report, but at first glance even this simple illustration is an ungainly thing with seven world maps and a large block of text:

The Met Office’s Poster for “Human Dynamics of Climate Change.

On closer inspection, it’s a fairly simple starting point for people new to the climate dilemma, although the name is something of a misnomer, because it barely touches on the human dynamics of climate change. Instead, it offers a very clear and simple starting-off point for those interested in exploring the realities of life on a managed planet, as this sequence of images illustrates.

The first image provides a consensus map extrapolated from a variety of climate models, and it shows what they all show: more droughts and higher temperatures.

The second shows an increased demand for irrigation worldwide:

The third  – and this one is bound to rightly draw intense scrutiny  – shows the winners and losers on the crop yield front, but only if we implement the irrigation measures highlighted above:

Some Will Win; Some Will Lose.

These projections come from a synthesis of 35 models  that were compiled last year by NASA scientist  Cynthia Rosenzweig and others. Those authors, however, made it clear that the projections were incomplete and highly uncertain. They don’t include the positive effects of carbon fertilization  – or plants growing faster because of excess carbon in the atmosphere  – but they also don’t capture the impact of long-lasting periods of high temperature on crops.

On top of that, they don’t reflect the devastating impact that climate change will have on our planet’s living ecosystems  –  the wetlands and forests that provide the bulk of our green infrastructure  – and they don’t reflect the way climate varies locally. The chart shows winners and losers on a macro scale, but even regionally, changes will shift productivity from low-lying areas to higher elevation areas and from underpopulated land to places where cities are now. I can’t imagine a scenario under which that transition happens peacefully, especially since we don’t really know where the productive areas will emerge.

The full technical report  does offer much more detail into changing crop yields, fish catches, and changes in transportation patterns  – but even that is merely a brief reminder of the challenge we face, and the fact that we cannot return to Eden. Even if we manage to keep the food supplies going, tomorrow’s earth will be a lot different from the one we grew up on.

The landing page also provides links to both a ‘business as usual’ greenhouse gas concentration scenario (RCP8.5) that excludes mitigation actions and a ‘middle of the road’ socio-economic scenario (SSP2) for population change. It also provides a link to questions and answers related to the map here (PDF, 70 kB) Alternative version of the map (copied directly from the MetOffice HDCC landing page) An alternative version of the map is available here: HDCC alternative map (PDF, 8 MB), and a similar version under an ‘aggressive mitigation’ greenhouse gas concentration scenario (RCP2.6) is also available for comparison here: HDCC alternative map mitigation (PDF, 7 MB). The following document details the differences between these two versions and the version at the top of the page: HDDC map alternative version information (PDF, 35 kB) For more detail on the present-day and future change information used to produce the ‘Human dynamics of climate change’ map, follow the links below.