More than 200 major brands use carbon offsets to reduce their greenhouse gas emissions, according to a recent Ecosystem Marketplace report. Representatives from two of those companies, Volcom and Intuit, spoke at Sustainable Brands about how they’re promoting offsetting from within. 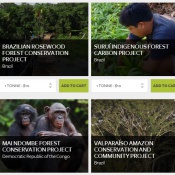 15 June 2015 | When Sean Kinghorn started his new job as a senior sustainability manager at the software company Intuit, he wasted little time in proposing an ramped-up emissions reductions goal to the company’s executives.

His plan involved cutting emissions 20% under a 2012 baseline by 2020 and targeting both direct and indirect emissions, categorized as scope 1, 2 and 3 emissions. He also suggested using offsets to deepen the impact beyond this 20% reduction.

“Since I was two months into the honeymoon phase, I kind of put my neck out there and said, ‘I do not believe in us investing in offsets unless we’re going to set a science-based goal and be incredibly aggressive for all of our scopes.’ And they said yes,” Kinghorn said, speaking during a panel discussion at the Sustainable Brands conference in San Diego last week.

Since then, the maker of TurboTax and QuickBooks has purchased enough offsets to make the company carbon neutral across all three scopes. It buys from avoided deforestation projects in Borneo and Madagascar, a biomass project in Brazil, and wind, cookstoves, and biomass projects in India – as well as two projects in the United States.

Volcom, the lifestyle brand that markets apparel to surfers, skateboarders, and snowboarders, also practices “offset-inclusive carbon management,” purchasing tonnes from Wildlife Works’ Kasigau REDD+ project that protects 200,000 hectares of dryland forest in Kenya.The brand uses offsets to neutralize the emissions of its sporting events while parent company Kering offsets all scope 1 and 2 emissions on the business side. In addition, Kering has set a target of directly slashing carbon emissions 25% by 2016 across all of its brands, using 2012 as a baseline.

“Our carbon mentors came from within,” said Derek Sabori, Volcom’s VP of Global Sustainability. “For us, the idea of carbon offsets was introduced to us thanks to our parent company Kering.”

Intuit and Volcom are in good company. Fourteen percent of corporations reporting emissions data to CDP engage in carbon-inclusive carbon management, according to recent Ecosystem Marketplace research. Far from “greenwashing,” these offset buyers – which include major consumer-facing brands such as Coca-Cola, Toyota, Delta Air Lines, Clorox, Sony, and many others – invest in direct emissions reductions activities such as energy efficiency and low-carbon product design at a higher rate than companies that don’t offset. Offset-buyers spent a collective $41 billion on these carbon-cutting activities in 2013 and were five times more likely to use an internal price on carbon.

However, both Kinghorn and Sabori admit that they haven’t yet done much marketing around their companies’ offsetting programs – or even sustainability in general – something that Kinghorn sees as a big miss.

“We’ve built up a good inventory of sustainability stories,” added Sabori. “Now we have to figure out how to tell those.”

Tell it From the Treetops

Recent social media attuned initiatives such as Stand for Trees and NatureBank are beginning to bridge the communication gap around carbon offsetting.

Since its launch in February, Code REDD’s Stand for Trees initiative has facilitated 35,000 tonnes worth of carbon offset sales from a dozen avoided deforestation projects across Brazil, Cambodia, Colombia, the Democratic Republic of the Congo (DRC), Indonesia, Kenya, Madagascar, Peru, Zambia, and Zimbabwe. The Stand for Trees website mimics an online shopping experience and allows individuals to purchase offsets in tonne or half-tonne increments, for $10 or $5, respectively – and then share the purchase on social media channels.

“What we really wanted to do is take this wonky, technical REDD mechanism and this crazy acronym and translate it into something that made sense for people on a human level, on a personal level,” said Gina Angiolillo, Communications Director at Code REDD.

A screenshot from Stand for Trees, which makes purchasing REDD offsets as easy as online shopping.

NatureBank, an online platform being developed by British Columbia-based carbon offset originator Offsetters, also aims to use technology and social media to make carbon offsetting more accessible. Offsetters CEO James Tansey describes the platform as akin to Facebook or eBay for nature. Users will be able to earn “nature coins” by clicking through different forest carbon projects, pick a line on a map and watch footage from a drone as it flies through a rainforest, and buy “digital rights” to certain hectares of land conserved through a carbon investment.

“What people get emotionally connected to and excited about is the idea of conserving some of the almost priceless assets in terms of forest natural capital,” said Tansey. “People don’t get excited about something as abstract as carbon offsets.”

NatureBank will be operational next month, with the goal of mobilizing $1 billion in conservation carbon finance by 2018.

As part of the ongoing Stand for Trees campaign, Code REDD reached out to the Saint Louis-born rap artist and activist Prince Ea to see if he’d be interested in getting involved. Prince Ea visited the Kasigau Corridor REDD project in Kenya and the Mai Ndombe REDD project in the DRC. The result was the provocative video “Sorry” in which the rapper apologizes to future generations for destroying the planet – then flips a switch on his message halfway through to say it’s not too late. The video was released on Earth Day of this year and was viewed 12 million times in the first 12 hours. It has since reached more than 66 million views on Facebook.

“How do you get people to care? Well, you have to care,” Prince Ea, whose real name is Richard Williams, said during a plenary session at Sustainable Brands, where he got a standing ovation.

In the epilogue to his “Sorry” video, Prince Ea questions the idea of destroying forests for money.

Stand for Trees is early proof that corporate offsetting programs have brand value, Angiolillo said. “We can talk to companies and say, we know that consumers get it – we had 20,000 of them purchase a tonne on our site,” she said.

The “gaming” aspect of NatureBank also aims to make the concept of offsetting more approachable – even fun.

“The inspiration here is that if you can get millions of people to buy FarmVille and Angry Birds, then surely you can do something on the gamification front with conservation,” Tansey said.

Demand for carbon offsets on the voluntary market grew 14% last year to 87 million offsets, according to Ecosystem Marketplace’s Ahead of the Curve: State of the Voluntary Carbon Markets 2015 report, released last week. However, average prices fell to an all-time low of $3.8/tonne as offset suppliers faced a buyer’s market. Suppliers such as Offsetters and Code REDD’s Stand for Trees remain hopeful that the percentage of companies that engage in offsetting will grow.

“Any lightbulbs that needed to be changed should have been changed by now,” said Angiolillo, referring to the increasing sophistication of companies’ sustainability efforts. “So I think now that we’ve moved along far enough in this space, we are opening up a whole new potential set of offsetters who have done the things they need to do on their own side first, and now they have no more excuses.”

Indeed, scope 3 emissions accounted for three-quarters of offset buyers’ emissions, according to Ecosystem Marketplace’s analysis of public CDP disclosures – the elephant in the room in terms of companies’ true climate impact. Since these emissions occur upstream in a company’s supply chain (e.g. land-use change associated with the procurement of raw materials) or downstream in customer’s use products (e.g. the energy used when a consumer plugs in a company’s phone or refrigerates their food products), they are difficult to tackle in the short-term. Offsetting is one way to address these indirect emissions immediately.

More than 70% of companies’ reported scope 3 emissions come from customer’s use of their products, according to Ecosystem Marketplace research. | Graphic design by Eszter Bodnar.

Intuit’s measures to cut emissions include upgrading equipment to enhance energy efficiency in the company’s data centers, installing solar panels on its California buildings, increasing video conferencing capabilities to cut down on employee travel, and innovating towards “digital distribution” of all of its products to avoid packaging and shipping emissions. But all of these things take time.

“We need to invest in offsets now because I believe the planet can’t wait,” said Kinghorn.