Forest carbon could be a boon to indigensous people who protect their rainforest – but it could also be a bust for tribes who get fleeced by carbon cowboys.  Media reports of an apparent fleecing in Brazil, however, miss the point.  Something fishy is indeed going on, but it’s the investors who would have been the victims, and not the tribes, writes Raul Silva Telles do Valle. 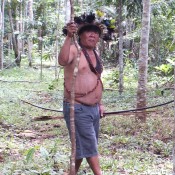 Forest carbon could be a boon to indigensous people who protect their rainforest – but it could also be a bust for tribes who get fleeced by carbon cowboys. Media reports of an apparent fleecing in Brazil, however, miss the point. Something fishy is indeed going on, but it’s the investors who would have been the victims, and not the tribes, writes Raul Silva Telles do Valle of Instituto Socioambiental.

This story originally appeared in Portuguese, in the Public News Agency. Please reference the original when citing it.

12 April 2012 | In the mainstream media, the story of a forest carbon contract sale signed between the Munduruku people and an obscure Irish company called Celestial Green Ventures, has taken on an air of threat to national security: the indigenous people would, according to reports be selling, at the price of bananas, a slice of the Amazon. For those who are searching for reasons to take land away from indigenous peoples (there are various legislative proposals in this regard), this would be a demonstration that such important pieces of our territory should not be left in hands of such irresponsible people. It would be much better to leave public lands in the hands of large producers. These, who also sell much of what they produce to multinationals (Bunge, Cargill, Mafrig, etc.), do so in the name of “progress”.

There is not, however, any threat to sovereignty in this case, because what is being negotiated is not the land or the forest that the indigenous people preserve. Even if it were, the contract would be null and void, since the Federal Constitution prevents indigenous lands or their natural resources from being sold to third parties (art. 231, §40). A court would never validate such a contract.

In this specific case, the objective of the contract is the “cession”, on the part of the indigenous people, of the right to sell eventual and future carbon credits that could be generated through the forest conservation in the TI Munduruku (99.5% of the area is still preserved). In legal terms, we would say that the contract is not alienating property, but mere expectation of rights. That for two reasons: a) at this moment, an established market for carbon credits derived from avoided deforestation does not exist; b) even if it did exist, in the manner in which this “partnership” was apparently made, nothing guarantees that in reality there wouldn’t be a future increase in deforestation in the area. Allow me to explain.

The Durban Conference on Climate Change, held at the end of last year, moved the establishment of a new commitment period for the greenhouse gas emissions reductions for industrialized countries to 2020. Until then, countries which have already met their actual targets do not need to increase them and those who were unable to meet theirs (Japan, Canada, Australia) will remain without any targets.

This global indecision practically prevented the birth, in the short term, of any Reduction of Emissions from Deforestation and Forest Degradation (REDD) mechanism (learn more) which could generate a demand for carbon credits from avoided deforestation. Today, therefore, there are no rules about how forest credits can be issued and much less a market for them. What does exist is a still incipient and unregulated voluntary market, which, although healthy, is much more similar to “green marketing” than any emissions reduction mechanism. And which, for this reason, has a minimal demand.

Beyond this, there is another serious problem in the negotiation between this company and the Munduruku. It presupposes that, in the future, the forest will be there and that, as such, if a market and regulations exist, some credit will be generated. But what guarantees that the forest will continue preserved? The US$ 4 million? Obviously not.

Avoided deforestation is not the result of a contract or even a payment. Especially in indigenous territories, it can only be reached through adequate territorial use planning, which can project how the indigenous people want to use the natural resources on their lands in the future. In Colombia, this planning has official recognition (life plans or planes de vida) which serve as the base for the transfer of public resources for management by indigenous authorities. In Brazil, these still do not officially exist, but they could – and should – be incentivized if the National Policy of Environmental Management in Indigenous Territories (Polí­tica Nacional de Gestí£o Ambiental em Terras Indí­genas – PNGATI), elaborated by the federal government in 2010, with ample consultation with indigenous populations, had already been approved by the president of the Republic.

There are positive REDD discussions with indigenous peoples underway in Brazil, which started with the preparation of a land use plan. Questions such as border surveillance, forest management, village structure, transportation, health, education, institutional strengthening of indigenous associations and enhancing agricultural systems are elements which should be included in long and deep discussions between those who inhabit the land, old and young, shamans and health agents. Without internal agreements and adequate planning, it’s impossible to guarantee that there won’t be deforestation because, above all else, with the advance of the agricultural frontier towards the regions where indigenous territories are, conservation will be permanently threatened. The new Forest Code in discussions in the National Congress, for example, permits that up to 20% of Indigenous Territories could be deforested for alternative land uses (pastures or agricultural activities). Therefore, forest conservation (and that of carbon stocks) is and will continue to be an option for indigenous peoples, not a fact of destiny.

Now that the majority of indigenous territories in the Brazilian Amazon have been officially recognized, we enter into a new phase, whose challenge is precisely to support indigenous people to manage their lands in a context which is totally different from that which existed when the majority of their actual leaders were born. The advance of roads, waterways, hydroelectric dams, farms, loggers and cities brought threats, but also opportunities, which can be harnessed for better or for worse. Today a large part of the Amazonian indigenous population still lives within a subsistence economy, with very few public services (health and education) available to them and depending on assistentialism from the National Indian Foundation (Fundaçí£o Nacional do índio – Funai) or pilot projects executed in partnership with NGOs to obtain additional income. This is obviously an unsustainable situation in the immediate future and, if there is public support for the “forest use” option, many groups may fall, sooner or later, in the dilemma experienced by the Pareci (MT), who rent out part of their land to neighboring soy farmers, because of the absolute lack of viable alternatives.

It is clear, then, that no REDD project, will have any chance of success, without being based on a life plan of the involved populations, in an option for generating well-being through the sustainable use of the forest. In this context, eventual carbon credits could be a valuable source of resources to finance the implementation of this plan. It isn’t the only option, but a fundamental one.

The case of the Munduruku apparently doesn’t have any of this. The contract hovers over a vacuum. There was not – at least in the public eye – any land use planning, no agreement among the indigenous people themselves about the future exists. There is not a strategy for addressing the ever more frequent threats to the forest which exist there, no plan regarding training new generations to use the land in a manner equally as harmonious as previous generations, but with added value that will allow them to generate well-being.

This contract would be, therefore, the fruit of opportunism by an obscure company which, at its heart, does not threaten the country or the Amazon, but the indigenous people who signed the contract themselves. It actually tries to create a legal obstacle for the Munduruku if, in the future, a REDD mechanism – and emissions reductions – actually exist, operating in Brazil and the world and the forest in their territory begin to gain some value for being able to generate carbon credits. This contract would oblige the indigenous people to negotiate with this company to be able to access this eventual and future market, since it gave the company the right to generate and sell these credits. Although clearly a null contract, by bringing abusive conditions for the Munduruku, it will become an asset for the company, which can stop any future negotiation by the indigenous people. Who will want to purchase credits disputed in court? The situation is similar to what happened in the beginning of the internet, when opportunists rushed to register domains using the names of famous companies to later negotiate with them at the price of gold.

Therefore, although fears about national sovereignty were misplaced, this case raises the need to advance with national regulation for REDD projects which can separate solid proposals from empty ones, like this one. A proposal can only be solid if it is closely tied to a land use plan, whether it is in indigenous lands or other areas. For this reason, it is urgent that the president of the Republic signs the decree which institutionalizes PNGATI and finally gives resources to the Brazilian society to invest in the good management of indigenous territories, which is fundamental for the future of the climate on Earth and in Brazil, of the Amazon and the 205 indigenous groups who inhabit it.

This story originally appeared in Portuguese, in the Public News Agency and was translated for Ecosytem Marketplace by Rebecca Anzueto.   It is used by permission.   Please reference the original when citing it.

Read this in its original format.