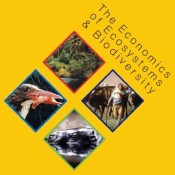 13 July 2010 | LONDON | The conference opened with a message from none other than His Royal Highness (HRH) the Prince of Wales, via video message. Prince Charles knows his stuff – he’s familiar with the TEEB, and he added a 4th ‘R’ – Restore – to the traditional Reduce, Reuse, Recycle. He encouraged conference delegates to “…ensure that environmental resilience is at the heart of economic resilience.”

Johan Eliasch (Chairman, Head, and former Special Representative of the Prime Minister of the UK) pointed out that biodiversity loss poses a serious business risk. The conference goals are 1) to celebrate the International Year of Biodiversity and the progress that has already been made; 2) to challenge the conventional ‘running down’ of natural capital; 3) to provide a forum to exchange knowledge, expertise, ideas; 4) to capture feedback and channel it to inform the October CBD COP10.

Highlights from the session:

Pavan Sukhdev noted that the TEEB project started in 2007, when the Stern report on the economics of climate change came out, and folks in the biodiversity world thgouth ‘we ought to have like this for biodiversity.’ “Nature is largely economically invisible.” In the absence of valuing nature, the trade-off decision-making is heavily weighted towards development or conversion of biodiverse habitats. As an example: the economic value of converting mangroves to shrimp farming may be greater than the ‘invisible’ value of the mangrove’s ecosystem services – unless a shadow value can be put on these services and considered in decision-making.

Josh Bishop is the lead of the TEEB for business report. The report is full of case studies and statistics, and Mr. Bishop’s presentation provided some examples.

A recent PWC survey on business leaders’ knowledge on biodiversity showed varying levels of awareness of biodiversity (value/risks). A study by the UK organization Trucost contributed a study on the cost of deforestation in China (US $12.2 billion) – considering things like property loss from flooding, reduced precipitation, reduced water runoff, etc. Another case study in the report looked at the value of business’ dependence on biodiversity via the story of blueberry crop dependence on pollination services.

Chapter 3 of the report focuses on measuring and reporting biodiversity and ecosystem service impacts and dependence by business. One example: SAB Miller (brewery) set a quantitative target of water productivity (25% by 2015, with a potential savings of 20 billion liters of water per year). Chapter 4 is concerned with how to translate biodiversity risks to business. Chapter 5 turning ecosystem services into a business cash flow (eg – new markets like REDD). What it takes to make markets work is enabling policy: ending subsidies that damage ecosystem services, providing tax credits and other incentives for provisioning ecosystem services, and providing information and transparency on markets. Chapter 7 looks at various standards.

There are activities that business can do today: identify impacts and dependence on BES, assess risks and opportunities; develop BES information systems set targets and measure and value performance; avoid/minimize/mitigate risks; and more.

Rt Hon Caroline Spelman MP (Secretary of State for DEFRA) addressed the conference delegates for the Keynote Address. Despite efforts, the 2010 target for the Convention on Biological Diversity has not been met in the UK [or by any of the signatories of the CBD]. Biodiversity cannot continue to be seen as collateral damage to economic development. The UK is the first country in the world to be conducting a national ecosystem services assessment, which will be released next year.

Deforestation is a global and critical issue. Ms. Spelman touched on deforestation issues related to palm oil plantations and illegal logging, and noted some progress and plans related to sustainable sourcing and the potential of REDD+.

New markets must reflect the value of ecosystem services. “There are some prices that are just too high to pay. It’s imperative that each business examine its own supply chain… The world is going to start pricing natural resources, so if you move into this market early, you will [get a first-mover advantage].”

Panel Debate on the Policy-Practice Divide
A group of panelists spoke to future trends and policy changes required to engage business.

Highlights from the session:

Issei Tajima, Senior Vice-Member of the Environment from the Government of Japan, spoke on the topic ‘Towards Nagoya, COP10.’ This year is an important year for people around the world to address biodiversity issues. One of the activities that the Government of Japan intends is to create a new strategic plan to meet the new 2020 CBD target. The engagement of the private sector is of utmost importance. An interesting anecdote – the bullet trains of Japan have an aerodynamic ‘nose’ based on the beak of the Kingfisher bird.

Becca Madsen Becca Madsen is the Biodiversity Program Manager at Ecosystem Marketplace. She can be reached at [email protected].