Protected areas are effective at reducing tropical deforestation, according to a study by the World Bank’s Independent Evaluation Group (IEG). According to the study, forest reserves that allowed for sustainable use by local population were even more effective, on average, than strictly protected areas focused exclusively on conservation. 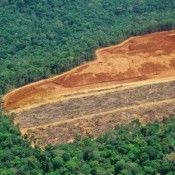 Protected areas are effective at reducing tropical deforestation, according to a study by the World Bank’s Independent Evaluation Group (IEG), published today in PLoS ONE — an international peer-reviewed online journal. According to the study, forest reserves that allowed for sustainable use by local population were even more effective, on average, than strictly protected areas focused exclusively on conservation.

16 August 2011 | What’s the role of national parks, nature reserves, and   other protected areas in conserving tropical forests?   Views have see-sawed on this.   In the 1990s, protected areas were often derided as ineffective ‘paper parks.’     But mounting evidence from satellite photos showed that deforestation inside protected areas was in fact substantially lower than deforestation outside. Then, a new wave of more sophisticated analyses pointed out that many protected areas were in remote areas or on mountainsides.     So lack of deforestation in these areas didn’t necessarily indicate the success of legal protection.   It might just mean that farmers or loggers didn’t find it attractive to clear these inaccessible forests.

At the same time, many social advocates worried that if parks were effective at protecting forests, it must be at the expense of local livelihoods.   Strict protected areas typically prohibit the extraction of forest   products that poor people need for subsistence and income.   On the other hand, it was assumed that relaxing these restrictions – for instance, allowing local people to gather fuelwood and harvest timber — would inevitably lead to forest degradation.

A newly published study provides some surprising and encouraging findings on protected area impacts.   The study used global satellite data on forest fires as an indicator of deforestation, and assessed all officially-recognized tropical forest protected areas.   The fate of forest plots inside protected areas were compared with otherwise similar, but unprotected points.   This controls for the tendency of many protected areas to be placed in inaccessible regions – and for some, on the contrary, to be deliberately set up to defend forests in regions of high pressure for deforestation.

As a result of the rigorous analysis, the study concluded that strict protected areas are indeed effective.   But areas that permitted sustainable forest use were on average even more effective.   And indigenous areas (which are only officially designated in Latin America) were by far the most effective, saving 16 percent of the forest over an 8 year period, compared to control areas.       In the context of the REDD+ agenda, these findings give hope to the quest to find ways to reduce deforestation and yet protect the livelihoods of forest dwellers.