Carbon Positive researcher Eduard Merger uncovered new perspectives and characteristics of the supply side of the forest carbon market and the unrivalled influence that domestic and international climate policy exert on the voluntary market when his company surveyed more than 100 developers of Afforestation/Reforestation projects.  The results were published earlier this month. 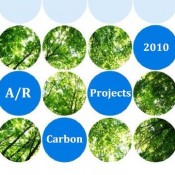 Carbon Positive researcher Eduard Merger uncovered new perspectives and characteristics of the supply side of the forest carbon market and the unrivalled influence that domestic and international climate policy exert on the voluntary market when his company surveyed more than 100 developers of Afforestation/Reforestation projects. The results were published earlier this month.

21 August 2010 | Ecosystem Marketplace’s David Diaz caught up with Eduard Merger, the author of the new report “Status and Future of the Afforestation and Reforestation (A/R) Carbon Sector” to provide a bit more insight on some of the more intriguing findings of the survey.   Read the brief Q&A  below, and access the full report from the Carbon Positive website.

Rather, the results indicate the multi-purpose of forestry activities. While rotation forestry is more likely to be applied for plantations, mostly for production purposes. For example in Uganda, most of the A/R carbon projects, (currently about 4) all apply the rotation forestry management regime where the government incentivizes the planting of fast growing tree species such as Pines and Eucalyptus but also other native species in order to meet the increasing shortage of wood fuel, as on the national scale deforestation is a large problem mostly due to the large woodfuel demand (90% of the national energy demand comes from wood supply). On the other hand, conservation forestry is more likely to be planted in order to primarily deliver other ecosystem services such as the prevention of soil erosion or water purification, specifically on degraded lands. Employing selective harvesting may have the benefits that large carbon stock can be maintained in an equilibrium, ecosystem services are delivered and production of wood products can be sustainably generated. It shows that if we talk about forestry, we have different concepts and different objectives. The level of co-benefits depends rather on the overall management of the projects and not on the silvilcultural methods.

DD: Your report was also one of the first to cover the different types of financing project developers are currently utilizing, including estimates of the numbers of credits coming through ex-ante credits which represent sales of emissions reductions that have not yet taken place. What were you able to discern about project developers motivations for pursuing ex-ante credits as opposed to other transaction types of ex-post credits?

EM:  The major reason to pursue ex-ante credits is definitely to generate early revenues in order to finance A/R activities. Particularly A/R projects face the highest costs at the beginning of the project lifetime due to management capacity building, planting, maintenance, nursery establishement etc. In contrast revenues are generated after decades. Under such circumstances, the early carbon revenues constitute crucial financial returns in order to even start the projects. This comes down to additionality. Through the ex-ante approach project developers can reduce the large financing gap between the beginning of the project and the time period until revenues are generated.

However, in the future I see rather ex-post forwards contractual arrangements as a very important mechanism, because buyers would receive credits with a fixed vintage, while project developers have the possibility to access early incomes for the carbon sequestered in the future 5 or 10 years.

It is important to note, as the survey shows that over 40% did not know what kind of credits they were pursuing. Personally I believe that many project developers are not well aware about the different approaches and the implications on their project finance. Therefore I tried to explain it little bit more in detail in the report. But still, there is more information on that necessary.

EM:  The emergence of standards has definitely provided many different options to project developers. The emergence of standards has fostered innovation in the forest carbon market and we are currently in a phase where the efficacy of standards is being tested by practically applying them, but we are still in a very early stage. However, we also have the problem at the moment that buyers and project developers are not aware about the options they have and the array of standards creates confusion at the same time. (For example, many buyers still believe that if a project is certified solely to CCBS, carbon credits can be accepted as high quality, even though CCBS does not issue carbon credits). Here we see the general lack of information. I think this is a challenge in the next years to get the market participants better informed.

About the future of standards, it is difficult to predict the future. I think it will depend on the post-2012 climate agreement (or whatever there will be). If there will be a strong international agreement, the number is likely to reduce. Otherwise, we will see a fragmentation of different carbon markets with new standards coming on-stream, e.g. China has just published a new voluntary standard (only for China) and other countries may follow. Under such circumstances we will probably shift from the pure voluntary markets to different national schemes, where we will have different regulation for forestry projects making an international trade of carbon credits incompatible. Therefore, the number of standards will heavily depend on the international climate regulation post-2012.

DD: Somewhat surprisingly, when asked why they chose particular offset standards, project developers ranked compliance costs lower than any other choice. Considering the highest-rated option of “ability to sell carbon credits” and the current preferences for particular standards your report also shows, do you think the cost of standards compliance is likely to rise in importance for project developers in the future? Or is the market access granted by a seal of approval from a particular standard likely to outweigh concerns over compliance costs for the foreseeable future?

EM:  Regarding the importance of cost of compliance with the standard, it is rather an economic decision of project developer. If I can sell my credits to a high price with a certain standard, then the costs to meet the standards are not so important as long as the costs are lower than my benefits from carbon revenues. This will heavily depend also on the carbon prices in the future. With increasing experience and increasing efficiency project developers will rather be able to reduce costs to comply with the standards.

With the maturation of the forest carbon markets and a better understanding of on the efficacy, efficiency and legitimacy of standards there will be a kind of selection process between the standards. The standards that are able to deliver high revenues at low cost will be preferably be used. This is where organizations such as Forest Trends (Ecosystem Marketplace), Carbon Positive etc. come into play that has the capacity to do research on these things and finally communicate to all market participants what works in the market and what does not.

DD: What was the most important or surprising thing you learned from exploring the survey responses?

EM: The importance of international post-2012 regulation has become apparent. We have seen that many project developers have selected the A/R CDM as well as other voluntary carbon accounting standards. This is due to the uncertainties over the future. And as forestry is a long-term investment decision, it is of utmost importance to have certainty of at least 5 -10 years.

Furthermore, many project developers seem to be not aware on the differences of ex-ante, ex-post and ex-post forwards and the implications on project finance. Therefore it seem important that project developers get better informed on the possibilities they have.

Eduard Merger studied forestry science at the Albert-Ludwigs University, Freiburg (Germany) and the University of Canterbury, Christchurch (New Zealand) and completed a Postgraduate diploma in Forestry Science and a M.Sc. in Forestry Science. In the recent years he has worked as a forest carbon consultant for several organisations and on climate forestation projects. Currently, he works partly for UNIQUE forestry consultants (Germany) as climate finance officer for land-based carbon projects and as a freelance consultant.

David Diaz is a Forest Carbon Associate with Ecosystem Marketplace.   He manages the Forest Carbon Portal, and can be reached at ddiaz(at)ecosystemmarketplace(dot)com

Access the Full Report
What’s Next for Forest Carbon in North America?
Trees Fare Well in Latest US Climate Bill