As Louisiana’s wetlands and mangroves retreat, the low-lying state becomes more and more susceptible to hurricanes and other coastal disruptions. Fortunately, mangrove forests also pull massive amounts of carbon out of the atmosphere and store it in the ocean floor. A new study says that carbon finance could provide up to $1.6 billion for wetland restoration in that state. 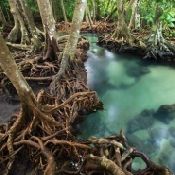 23 February 2015 | A two-year assessment of the potential to develop blue carbon projects on Louisiana’s coast estimates  that carbon finance revenue can provide up to $1.6 billion in critical funding to assist with wetland restoration over the next 50 years. The study, supported by Entergy Corporation through their Environmental Initiatives Fund, and prepared in partnership by New Orleans-based Tierra Resources and Portland-based nonprofit The Climate Trust, examines existing wetland restoration techniques river diversions, hydrologic restoration, wetland assimilation, and mangrove identifying areas for future scientific investigation to support carbon offset programs.

Findings from the report will be shared by Tierra Resources and the American Carbon Registry at a free national webinar, scheduled for March 5, 2015, at 1 p.m. Central Standard Time.

Initial study findings showed that restoration in Louisiana has the potential to produce over 1.8 million offsets per year; almost 92 million offsets over 50 years. This is the equivalent of taking approximately 350 thousand cars off the road each year or 20 million cars off the road over 50 years.  Wetland restoration techniques identified in this study could potentially generate $400 million to $1 billion in offset revenue depending on the dollar value of the carbon offset with the potential for almost $630 million more by including prevented wetland loss in the carbon accounting.

Entergy’s commitment to the study stems from the company’s mission to create sustainable value for all its stakeholders. Wetlands play a crucial role in storm protection for many Entergy communities, helping preserve industries, businesses, homes, and livelihoods along with Entergy’s own facilities and assets.

“Entergy was pleased to be able to sponsor this important work and help unlock the huge potential for wetland carbon credits in Louisiana,” said Chuck Barlow, vice president for environmental strategy & policy for Entergy Corporation. “By capitalizing on the economic benefits offered through carbon credits, more of Louisiana’s wetlands can be restored and preserved. Eventually, this work in Louisiana can be expanded to address other critical wetland areas throughout the nation and the world, making this study a first step, with the potential for major global impact.”

Of the restoration techniques studied, forested wetlands that receive treated municipal effluent, referred to as wetland assimilation systems, have the highest net offset yield per acre. However, it was concluded that river diversions and mangrove plantings have the potential to generate the largest volume of offsets in Louisiana due to the huge amount of acreage upon which these restoration techniques can be implemented. Additionally, carbon offsets from wetland assimilation systems and river diversions show potential to be stacked with water quality credits should these markets evolve in Louisiana.

The primary barrier to wetland carbon commercialization that was identified through this study is the high cost of wetland restoration. Carbon finance will likely lead to new public-private partnerships that leverage carbon funds with government restoration dollars to stimulate investment into wetland projects.

“The results of this study demonstrate that carbon finance has substantial potential to generate important revenue to support wetland restoration,” said lead author Dr. Sarah Mack, President and CEO of Tierra Resources. “Furthermore, this study points to Louisiana as an innovator of creative financing strategies for wetland restoration, and as creating new investment opportunities that will yield substantial economic and environmental benefits.”

The American Carbon Registry, a leading voluntary and California compliance Cap-and-Trade Offset Project Registry, in 2012 approved a methodology developed by Tierra Resources, which quantifies the greenhouse gas emission reductions and carbon sequestration associated with restoring degraded deltaic wetlands in the Mississippi Delta. This methodology allows landowners and project developers to document, quantify, and seek verification for the GHG benefit of their wetland restoration projects, ultimately leading to certified offset credits that can be sold as carbon credits in the voluntary market.

“Carbon markets provide economic incentives for reducing carbon emissions, as well as an important and innovative approach to finance environmental restoration and conservation,” said Dick Kempka, vice president of business development for The Climate Trust. “The opportunity to engage in this emerging sector and help provide a path for wetlands restoration to enter the carbon markets has been an exciting journey.”

The restoration of the Mississippi River Delta and the storage of blue carbon (the carbon captured by coastal ecosystems) is of national significance. The economic health of much of the United States depends on sustaining the navigation, flood control, energy production, and seafood resources of this valuable deltaic river system. Each of those functions is currently at severe risk due to a coastal wetland loss rate of approximately one football field an hour.

“Wetland restoration provides a wealth of benefits including storm surge reduction, habitat preservation, carbon sequestration and recreation; as well as job creation, and economic development that are vital to Louisiana’s sustainability and resilience,” states Michael Hecht, President & CEO of Greater New Orleans, Inc. “By innovating creative financing solutions for coastal restoration, local companies like Tierra Resources are contributing to the growing hub of Emerging Environmental expertise that can be found in Greater New Orleans.”

The Ecosystem That Is Disappearing Faster Than Any Other on Earth

Cancun: The Allure and Elusiveness of Mangroves as Carbon Sinks