Forest carbon critics often contend that REDD finance will disenfranchise indigenous communities, but now the World Resources Institute and Rights and Resources International have published a new study saying the opposite may be true. Instead of threatening forest communities, REDD appears to be supporting them. 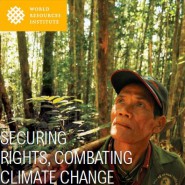 31 July 2014 | José Maria Arara, Almir Surui, and Aureliano Cí³rdoba all have three things in common: each is the leader of a traditional forest community of the Amazon; each lives in a country that nominally recognizes their rights to their forests; and each has used carbon finance to exercise and reinforce their rights. And they’re hardly alone, according to a new study called “Securing Rights, Combating Climate Change“, which was published jointly by the World Resources Institute (RRI) and Rights and Resources International (RRI) this week.

More than a year in the making, the study provides deep, clear, and compelling evidence that indigenous people and traditional forest dwellers act as guardians of the forest but only if they have clear land rights. An earlier study, “Stopping Deforestation: What Works and What Doesn’t“, also found a high correlation between the presence of indigenous people and good land stewardship, but it found little correlation between deforestation rates and land tenure. That was published in May by the Center for Global Development.

Both studies reinforce earlier analysis showing that community rights can be strengthened through mechanisms that use carbon finance to reduce greenhouse gas emissions from deforestation and forest degradation (REDD+).

“Many countries with REDD+ strategies identified strengthening community forest rights as part of their own strategy, the WRI/RRI report states. “In addition, respect for the rights of local communities and Indigenous Peoples is an internationally agreed safeguard to ensure REDD+ does not harm people or the environment.

The RRI/WRI report contends that successful implementation of a REDD+ strategy depends on community rights.

“If a community.s forest rights are weak or nonexistent, then the community will also likely lose their rights to carbon in the forest,” it says. “This will undermine their ability to engage in REDD+ initiatives equitably, effectively, and independently.”

It also singles out REDD+ as a bright spot among development efforts.

“With the exception of some international initiatives to reduce emissions from deforestation and degradation (REDD+), development agencies, governments, and others have failed to give enough weight to the connection between strengthening community forest rights and mitigating climate change, it says.

To protect forests, give your traditional communities legal rights to them, and then enforce those rights.

The report offered “five practical, evidence-based recommendations to donors, governments, civil society, and other stakeholders working on climate change, land rights, and forestry, which we have reprinted verbatim below:

1. Provide Indigenous Peoples and local communities with legal recognition of rights to their forest. Attention must be given to the millions of forested communities without legal rights to their forest. In Indonesia, where communities generally have no or weak legal rights, new legislation is pending to recognize communities ownership of their forests. Where communities have some legal forest rights, governments and their partners should strengthen these rights. While this recommendation applies to all relevant countries, those that are heavily forested and have weak community forest rights are of critical importance. In addition, stakeholders should support strengthening community forest rights as part of a future agreement on REDD+.

3. Support communities with technical assistance and training. Governments, donors, and civil society should provide training and technical assistance to communities and should undertake capacity-building activities. For example, in Mexico some communities receive training and support from the government to improve sustainable forest use and market access. In addition, governments, donors, and civil society should help ensure that people and local communities are able to participate genuinely in the development of legal and policy frameworks related to REDD+.

4. Engage forest communities in decision-making on investments affecting their forest. Governments and businesses should work together to ensure that government planning is consistent with international standards and that investments do not violate community forest rights. In Peru, the government’s failure to comply fully with international standards contributes to high deforestation of indigenous community forests. For example, national laws should require that the status of Indigenous Peoples and local community forest is determined well in advance of any decisions affecting the community. Also, if legal commercial extraction of subsurface minerals does occur on indigenous or local community forestlands, ensure that the extraction is conducted in the least invasive way possible and only after free, prior, and informed consent of the affected communities.