Environmental degradation robs countries of fish, forests and grazing land, which robs them of economic vitality and raises the risk of them not being able to make good on their debts.  That’s the key finding of tthe E-RISC project, which examined a variety of ecological risks and factored them into sovereign credit risk. Most countries, it found, aren’t. 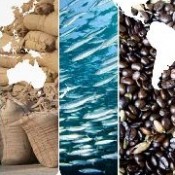 Environmental degradation robs countries of fish, forests and grazing land, which robs them of economic vitality and raises the risk of them not being able to make good on their debts.   That’s the key finding of tthe E-RISC project, which examined a variety of ecological risks and factored them into sovereign credit risk. Most countries, it found, aren’t.

28 November 2012 | Erik-Jan van Bergen has long seen parallels between the economic crisis that rocked the world two years ago and the overuse of environmental resources, but until recently it was little more than an intuitive hunch.

“We see some simple similarities with the current credit debt crisis where we borrowed too much from the future,” says Bergen, who is CEO of SNS Asset Management.“We run the same risk in the ecological space.”

Last week, he got a glimpse of data that backs that up – courtesy of E-RISC (Environmental Risk in Sovereign Credit), a project initiated jointly by UNEP FI (The United Nations Environment Programme Finance Initiative) and the Global Footprint Network.

Last week in London, the two partners issued a report, E-RISC Report, A New Angle on Sovereign Credit Risk, assessing the impact of natural resource risk on sovereign credit risk and found that countries that were once able to provide for their population with resources contained within their borders are now seeking additional resources from other countries and present more of a credit risk than they did in the past.

Specifically, it says, 80% of the world’s population now lives in nations that depend on resources from outside their borders, whereas in the 1960s, it was just the opposite.

Susan Burns, Founder and Vice President of the Global Footprint Network, says this trend that is altering country and bond risk and is caused by population growth and consumption demands, isn’t likely to turn around.

“The premise that this whole project is based on is that the world has changed,” Burns says. “Nature is no longer something that is nice to protect, but one of the most important forms of wealth for a nation.” Richard Burrett, Co-Chair of UNEP FI, agrees.

“I think it’s fair to say that traditional sovereign credit risk analysis inadequately reflects pressures from environmental risks-particularly pressures from growing global natural resource scarcity, environmental degradation and vulnerability to climate change impact,” he says. “There is a lot of research and work being done concluding ecosystems is worth more intact than damaged or converted,” says Ivo Mulder, also of UNEP FI. “Up until now, there hasn’t been a project to link this to economic factors.”

The project developers plan to bring their findings to credit agencies and bond investors so they can properly asses ecological risk and integrate the data into risk models.

The E-RISC project examined countries’ natural capital and “ biocapacity” or an ecosystem’s capacity to provide useful biological materials and services to world economies. The project measured the amount of natural resources like fish, forest and grazing land a country had.To investigate these newfound risks, the project developers examined the resource profile of five countries: Japan, France, India, Turkey and Brazil. Research for the project focused on three areas: overall trends of natural resources, exposure to resource risk and financial resilience to this risk.

Their conclusions were broken into three categories of risk. The first covers risk through price fluctuations on the import of resources. The more resources a country has to import, the more exposed it is to this risk. A 10% variation in commodity prices could have a material impact on certain nation’s trade balance amounting to between .2 and .5% of GDP, according to the project. This risk, says Burns, is not a long term risk but something that is already happening.

The second risk has to do with the degradation of nations’ resources mainly because of overuse. A 10% reduction in productivity in resources like cropland or fisheries could amount to a reduction in trade balance between 1 and over 4% of GDP, the report finds. Research shows that these impacts on GDP can potentially affect the underlying value of sovereign bonds and credit ratings.

The third category assessed an uncertain long term risk focusing on carbon emissions. Because the amount of emissions varies from country to country, a possible pricing scheme on carbon will affect nations differently. A cap and trade system, for example, would prove the most costly for nations with high carbon emissions. But because the structure for a potential pricing scheme isn’t currently in place, the E-RISC project is unable to fully measure the risk.

The five countries used in the project all demonstrated types of risks. Japan, France and India are consuming more resources than they have, which is prevalent for wealthy nations. Besides this similarity, the countries’ resource profiles differ. For example, France has a fairly balanced resource trade and is less exposed to risk than Japan and India. Both nations have natural resource deficit. Japan demands seven times more biocapacity than what is contained within its borders.

Turkey, as well, can’t solely supply its residents with resources and has become an ecological debtor, despite the fact that during the 1960s, the country had an ecological surplus. Turkey also faces the risk of supply disruption as the majority of countries it receives its biocapacity from are themselves in an ecological deficit.

On the other hand, Brazil possesses the largest amount of biocapacity in the world allowing the rainforest nation to absorb price fluctuations and other risks. But because the economy relies so heavily on its resources, Brazil must be careful of ecosystem degradation.

From the financial industry’s perspective, understanding this emerging systemic risk of environmental degradation is fundamental, Burrett says. The report shows a possible growing awareness of an environmental risk. Burns says several financial institutions are interested in this topic. The number of investments that used ESG (environmental, social and governance) factors in the selection process has also increased, although the overall number of investments in government bonds using ESG remains low.

Individuals from both the financial and environmental sector agree that the E-RISC project is shedding light on risks that, in the past, have been inadequately covered, which is adding value to sovereign credit risk analysis.