Conservationists and scientists hope to promote economic incentives for protecting coastal ecosystems with a recent study that highlights the large amounts of carbon they sequester.  It examines the benefits of these ecosystems if healthy along with the major environmental and economic losses that come with their destruction. 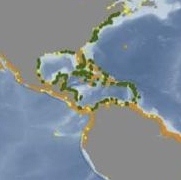 13 Septemberf 2012 Nearly 1 billion tons of carbon dioxide are released into the atmosphere annually due to the continued destruction of coastal ecosystems, according to a recent report.

The study, entitled Estimating Global ‘Blue Carbon’ Emissions from Conversion and Degradation of Vegetated Coastal Ecosystems”, was published this month by Duke University and examines the global and economic impacts of the loss of coastal-marine ecosystems that stored immense amounts of carbon. It finds that these devastated ecosystems caused $US 6-42 billion in economic damages and the emissions they released is equal to 3-19% of the emissions that comes from deforestation globally.

“Up until this study, people didn’t realize how big of a potential emissions source blue carbon destruction – and the destruction of these coastal marine ecosystems – was,” says Duke University Research Professor and Director of Economic Analysis Brian Murray.

Aside from a few finance mechanisms that use payments to preserve coastal ecosystems, the mangrove forests, salt marshes and seagrasses that make up Earth’s coastal ecosystems aren’t protected through economic incentives. Market forces give incentives to convert coastal habitat for agricultural and real estate purposes, the report says, and not for preservation.

The world has known about the benefits of coastal ecosystems for decades, but most of the ecosystem services that they provide don’t attract international attention. The local populations rely on services such as coastal protection, maintaining small scale fisheries, stabilization of erosion and coastal water quality for protection and their livelihoods, but people outside the coastal regions aren’t affected by these services.

Carbon sequestration, however, delivers the global service of climate-change-mitigation, and coastal ecosystems can sequester up to 50 times as much carbon as tropical forests. This is a valuable ecosystem service the whole world benefits from, which is why conservationists have focused in on it as a means for protecting these ecosystems.

For the global population, the danger of devastating these ecosystems lies in the possibility that the “blue carbon” stored within the sediment underneath the mangroves, salt marshes and seagrasses will be released. The study says the emissions released from these devastated vegetated coastal ecosystems could range from equalling the annual amount of emissions released from Venezuela, which is .15 billion tons, or go as high as matching Japan’s yearly levels of 1.02 billion tons, which is the fifth-largest emitter of carbon dioxide in the world, according to the report.

Murray says the loss of carbon absorbed in these ecosystems annually is trivial compared to the amount released that was stored in them.

“The real loss is if you clear these systems, all the carbon that has been stored for thousands of years is released into the atmosphere fairly quickly,” Murray says.

Carbon sequestration verifies the protection of coastal ecosystems as a method to reduce greenhouse gases and slow climate change. This also qualifies coastal ecosystems for the carbon market and other finance mechanisms. Now, conservationists face the challenge of finding funding for the complex projects that will implement methodologies never used before.

Costs to protect coastal ecosystems include the creation and preservation of an area as well as improving water quality. Expenses also have to cover the opportunity costs of the other, possibly more profitable, uses of an area.

“The financial viability is a really important component,” Pidgeon says. “But I think it will be awhile before we see true market financing of these projects.”

Pidgeon says the technical issues, seen in the forest carbon space, like guaranteeing quality over a long period of time and distributing funding among various activities and to local stakeholders are issues that will take time to figure out.

Because methodologies for protecting coastal ecosystems haven’t been tested before, the lengthy and expensive process of conservation becomes lengthier and more expensive. But the key to moving forward, Pidgeon says, is with small scale projects that will put the methodologies into practice.

“All the signals are that this might work,” Pidgeon says. “The next big step is quality demonstrations.”

Pidgeon believes the first of these projects will be funded through the government or philanthropy and not by market mechanisms because of the risk and expense.

The real need for funds will come later after a preservation area has been established. While the annual maintenance of preserving these ecosystems requires much less than the finance needed to create the area, maintenance funds must be supplied to the area year after year to ensure the area’s protection and upkeep.

“The long term financing of these places might be where the real value of carbon is,” Pidgeon says. “Because the carbon value is year by year, it can supply this sort of financing in the long term.”

More research is needed to account for specifics such as the regional conversion rates of mangroves and much more, the report says. But the research already completed is enough to move forward on blue carbon conservation.

And the value of these coastal ecosystems is being recognized internationally. Scheduled to come out in October is a Wetlands Restoration and Conservation credit under the VCS (Verified Carbon Standard). The new project category will include mangrove forests, salt marshes and seagrasses.

Other opportunities for coastal ecosystem preservation mentioned in the study include adding coastal carbon management into the UNFCCC. (United Nations Framework Convention on Climate Change) This would include conservation, restoration and sustainable use of coastal ecosystems.