11 September 2018 | This week, San Francisco hosts the Global Climate Action Summit (GCAS), a gathering timed midway between climate talks in Paris in 2015 and 2020. GCAS unofficially began on Saturday with the Rise for Climate demonstration and will continue until the weekend, with a number of high-level commitments by governments, business, and […] 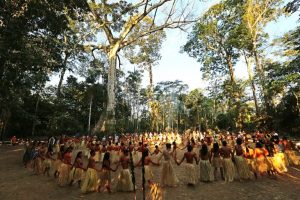 11 September 2018 | This week, San Francisco hosts the Global Climate Action Summit (GCAS), a gathering timed midway between climate talks in Paris in 2015 and 2020. GCAS unofficially began on Saturday with the Rise for Climate demonstration and will continue until the weekend, with a number of high-level commitments by governments, business, and other non-state actors expected over the course of the week and hundreds of side events taking place in the Bay Area.

At a pre-Summit meeting today, the Governor’s Climate and Forests Task Force officially and unanimously endorsed the “Guiding Principles of Collaboration and Partnerships between Subnational Governments, Indigenous Peoples and Local Communities.” The principles are also expected to be endorsed at the Summit later this week.

SISA is a ten-year-old framework for structuring ecosystem service payments, and Borges has served on the indigenous sub-program for most of SISA’s existence.

“These principles come from ten years of experience, and they provide a realistic way of helping indigenous people manage their land sustainably while protecting their boundaries,” he added.

Forests and other natural climate solutions are getting renewed attention as our chances of meeting climate targets grow increasingly slim. In a study published last October, scientists suggested that nature-based climate change abatement strategies could provide 37% of the emission reductions we’d need by 2030 to keep global temperature increases below 2 degrees Celsius. These reductions are cost-competitive with other strategies being debated for climate mitigation, such as carbon capture and storage technologies or switching to nuclear power. As conservationists have pointed out, nature-based solutions are also ready for deployment, today.

Members of the GCF Task Force have already committed to meet climate goals by protecting forests through numerous international and national commitments including the Rio Branco Declaration, the Under2MOU, and Nationally Determined Contributions under the 2015 Paris Agreement. What the new Principles codify is the recognition that “building and maintaining successful, territorial approaches to forest conservation and low-emissions development” depends on indigenous and traditional communities exercising a leadership role.

Research has shown that around the world, the best way to curb forest destruction is to strengthen community land rights. For example, in the Brazilian Amazon, deforestation rates in forests guarded by local and traditional communities are 11 times lower than surrounding areas.

Indigenous peoples and local communities are also critical to fighting climate based on sheer numbers: they use, manage, or own about one-quarter of the world’s land surface (and claim customary rights on far more, and 37% of all remaining natural lands on the planet.

“Our territory may be deep in the jungle far from cities and urban centers, but we’re actively engaged with NGOs, governments and the private sector to both maintain and improve life in the forest,” explains Tashka Yawanawa, Chief of the Yawanawa people, a community of about 1,250 people living in nine villages spread across a vast forest territory in the state of Acre, Brazil. “We partner with organizations at local, national and international levels, which has enabled our people to restructure our communities so our culture and spirituality is strengthened.”

Recent news suggests the risk of human rights abuses, obstruction, and violence faced by indigenous and traditional communities when they seek to safeguard their territories is growing around the world.

A report from the UN Human Rights Council released last month documented a “drastic increase” in violence against indigenous people who opposed major development projects in their territories such as mining, infrastructure, hydroelectric dams and logging. “It’s getting worse because many of the remaining resources in the world are found in indigenous territories,” Victoria Tauli-Corpuz, U.N. Special Rapporteur on the Rights of Indigenous Peoples and the report’s author, told the Thomson Reuters Foundation.

Recent years have seen environmental defenders and indigenous leaders around the world killed in record numbers, from Honduras to the Democratic Republic of Congo to India to Cambodia. Nowhere has this pattern been more pronounced than in Latin America, particularly Brazil. Against that backdrop, it comes as no surprise that the country’s deforestation rate climbed nearly 30 percent in the same year amid a widespread rollback of indigenous land rights.

In Brazil’s Sete de Setembro Indigenous Territory, for example, the Paiter-Suruí indigenous people have recently been forced to suspend a groundbreaking forest carbon project after a dramatic surge in illegal mining activities throughout their region, which federal and local authorities were unwilling to prosecute. Until gold deposits were discovered, the project dramatically reduced deforestation in the first five years of its operation (2009-2014), even as rates in surrounding territories nearly doubled.

The new Principles recognize some necessary precursors for meaningful action on natural climate solutions, including:

“2) Equitable and effective participation and consultation of indigenous and local communities and authorities in decision-making; and

“3) Design and implementation of benefit-sharing mechanisms and incentives to support indigenous and local communities’ livelihoods, forest stewardship and cultural resilience.”

Without secure land rights, communities and small enterprises are often unable to conduct business “legally,” and are otherwise ineligible for participation in forest certification schemes or subsidy programs that target smallholders. Even worse, laws and policies that preference large-scale production without recognizing the economic potential of small producers may serve to legitimize human rights abuses such as land grabs, leaving communities with little to no recourse when their rights are systematically violated.

A Roadmap for Action

The GCF Task Force says it will establish global and regional committees representing Task Force members, indigenous peoples’ and local communities’ organizations, NGOs, and other stakeholders to set out a road map for collaboration on implementing climate and sustainable development commitments.

This road map could include strategies like supporting jurisdictional approaches to carbon finance, and supporting with indigenous and traditional communities as they implement natural resource management practices that are aligned with each community’s vision for their social wellbeing, and working with regional governments, communities, donors, and markets to promote policies, capacity, and financial flows that strengthen tenure and cultural rights and conservation.

“Through this partnership, groups that have historically been at odds – Indigenous peoples, forest communities, state and provincial governments, and the private sector – have come together to address climate change and deforestation,” the GCF Task Force announced in a statement. “The principles represent a major shift in the global fight against climate change, one that emphasizes that people on the ground cannot wait for national governments to act.”

Genevieve Bennett covers environmental markets and finance, with a focus on biodiversity finance, natural infrastructure, eco-entreprenuership, strategies for scaling public and private conservation investments, and other market cross-cutting issues. Prior to joining Forest Trends she managed a demand assessment project for the Willamette Partnership in Oregon, and has also held positions with the Breakthrough Institute, the NYC Commission to the United Nations, and NYU Wagner School of Public Service. She holds an MSc from the London School of Economics and a BA from New York University. She can be reached at gbennett@forest-trends.org