Cash-strapped governments around the world have been experimenting with innovative financing mechanisms designed to save habitat as economies expand.  Such mechanisms will come to naught, however, without fair, transparent, and standardized ways of implementing them.  Ecosystem Marketplace hopes to help this process along with the global launch of SpeciesBanking.com 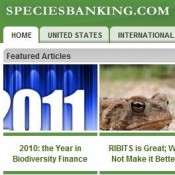 Cash-strapped governments around the world have been experimenting with innovative financing mechanisms designed to save habitat as economies expand.   Such mechanisms will come to naught, however, without fair, transparent, and standardized ways of implementing them.   Ecosystem Marketplace hopes to help this process along with the global launch of SpeciesBanking.com

7 March 2011 | The first target of the first goal in the new Strategic Plan drafted by the United Nations Convention on Biological Diversity (CBD) aims at “increasing understanding, awareness, and appreciation of the diverse values of biodiversity.”

That’s also the goal of SpeciesBanking.com, which has established itself as the leading provider of news and information on the North American mitigation banking sector since its launch in 2008.   This week, it is expanding to include biodiversity financing mechanisms from around the world.

The decision to expand stems from conversations that took place over the course of 2010, which the United Nations declared the ‘International Year of Biodiversity’,   but which failed to yield agreement on the need – let alone the means – of developing innovative financing for biodiversity protection at the CBD’s 10th Conference of the Parties (CBD COP10) in Nagoya, Japan.

Although the much-anticipated Nagoya meeting failed to yield agreement on this most urgent issue, it did catalyze many governments to consider policies and programs that might drive financing for biodiversity protection, including compensation mechanisms that harness new development.

Over the course of these meetings, it became clear that, if there is one thing that proponents and opponents of biodiversity compensation mechanisms agree on, it’s the need for transparency and democratization of information in the early stages of market and institutional development.

In an effort to provide that transparency, Ecosystem Marketplace decided to broaden the coverage of SpeciesBanking.com to cover the entire world.

The Challenge of Going Global

“There are a lot of different types of incentives and laws and policies that require something like habitat banking but it may be sort of on a one-off basis or it may be paying a fee into a government conservation fund,” she says.   “We wanted to show and provide information about these programs around the world in addition to the habitat banks.   We also knew that we wanted to put the information into an online searchable format.”

Ray Victurine of Wildlife Conservation Society says that no depository of all biodiversity offset incentives is currently available, and he believes that practitioners, academics and project developers looking for ideas and models will find the site especially useful.

“There seems to be growing interest in issues around compensation, around offsets, around species banks around the world and people are looking at the instruments that might be available as a way to protect biodiversity as another tool,” he says.

With this global launch, SpeciesBanking.com looks to cover biodiversity compensation data from around the world, from information on fish habitat banks in Canada to policy developments on biodiversity offsets in Mongolia and everyplace in between.   All in all, the site will continue to include information on the over 900 species, wetland and stream banks in the United States while adding data from over 27 habitat banks around the world and over 60 policies and programs that provide the underlying drivers for biodiversity markets.

“The concepts of offsetting have become quite sophisticated, but there is a limited awareness among policymakers and the general public about what it means to do species banking,” says Joshua Bishop, the Chief Economist at International Union for the Conservation of Nature (IUCN). “A global version of SpeciesBanking.com could help demystify this whole thing and remove some of the red flags.”

Bringing that information together was not an easy task, as finding clear and transparent information on projects is difficult.

“A challenge both in the U.S. and in every other country we’ve looked at is just trying to get transparent information about programs and banks,” says Madsen.

“Really, I think it’s a question of just stimulating people’s thinking and ideas about how to structure an opportunity,” he says.   “The condition in places will be so different…all those issues will have to be taken into account.”

The Need for Global Information

IUCN estimates that $300 billion per year needs to be flowing to conservation by 2020 to halt biodiversity loss, but the Global Canopy Programme’s Little Book of Biodiversity Finance,   notes that only $36 billion to $38 billion is being delivered—and most of that from philanthropic aid and donor sources whose funding is running low.

“The gap in financing of what biodiversity needs to stop losing species and what we are currently investing is just a huge gap.   Where is it going to come from?” asks Madsen.

Though governments may have promised to halve biodiversity loss by 2020, the money will have to have come from another source; most governments are cash-strapped and not allocating budget for animal conservation.

Currently, the global annual market for biodiversity offsets, compensation and bank credits is around $2 billion and likely much more since this emerging biodiversity market has largely developed under the radar.   The examples found on SpeciesBanking.com are a source of new mechanisms to incentivize investments in biodiversity restoration and protection.

SpeciesBanking.com, according to Bishop, can encourage interest and investment in biodiversity banking.

“We need to popularize the idea of biodiversity outcomes, and SpeciesBanking.com could generate that interest in the business world,” he says.   “It can help promote the idea that having a net positive impact on biodiversity is a reasonable aspiration….It’s just not on their radar screen for the most part.”

SpeciesBanking.com may bring it to their radar screen, but there are still questions of how biodiversity incentives will work on an international scale—and even if they will work.

“Offsets will be a part of (investing in ecosystem restoration and management,) but we haven’t figured out how to make them work on an international scale,” says Bishop.   “A global version of SpeciesBanking.com can help us all understand how this might be done.”

Victurine does not think an international market reminiscent of the carbon market for biodiversity will work.   International standards could be created, according to Victurine, but even those could only be applied to specific geographies.

“One of the big criticisms of species banks or wetland banks has been people who provide credits for wetlands far off from where the impacts are,” says Victurine.   “I think there are some important lessons to learn from where things have worked well and not worked so well.”

What about the Future?

The global launch of SpeciesBanking.com is not the end of information expansion on the site.   Madsen says the team at Ecosystem Marketplace will continue to update information, expand details of existing projects and even try to find indicators of ecological quality.

The current version of SpeciesBanking.com will be debuted in an online live webinar launch later this month.