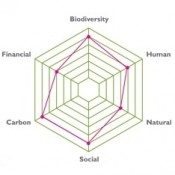 14 June 2013 | Ever since its debut in 2008, the SocialCarbon Standard has aimed to promote continuous improvement in the cultivation of six distinct  “resources” that contribute to sustainability. Version 5.0 continues this approach, but   features simplified templates and improved metrics, says Divaldo Rezende, one of the original creators of SocialCarbon, who is back on the management team after serving two years as Secretary of Environmental and Sustainable Development for Tocantins state in Brazil.

The standard’s streamlining process will be similar to efforts made by the Verified Carbon Standard and Climate Community and Biodiversity standards (VCS + CCBS) in late 2012, to optimize projects’ dual certification experience.

The main change was the implementation of the “temporary nature rule”, which mandates an overlap of at least 50% of the VCS accounting monitoring period with the SocialCarbon monitoring period for the units to be considered SocialCarbon. The benefit of implementing the rule is to secure the social benefit for the project before it is certified and to ensure the monitoring is done at the same time as the VCS, which will lower costs to project developers, he says.

SocialCarbon has moved its headquarters to Europe from Brazil to be closer to the entities and project developers it will be working with to disseminate the standard and design a “strong and deeply coordinated” fundraising campaign, Rezende says. In addition, Rezende is being joined on the management team by Antonio Truan, formerly of Banco Banif, Banco Santander’s private banking global division, in Madrid, Spain.

Since the first issuance and retirement of SocialCarbon offsets five years ago, there has been an incremental increase in the use of the standard. Markit Environmental Registry, which issues and tracks SocialCarbon+VCS certified offsets, expects to see this continue in 2013, noted Jane Lloyd, Markit’s director of environmental markets, at Carbon Expo in Barcelona late last month.

The voluntary co-benefit standard has certified 60 projects for their contributions to sustainable development in countries such as Brazil, China, Indonesia and Turkey, Rezende says. In 2012, SocialCarbon+VCS offsets held onto 2% market share across all standards, and a slightly larger share of all offsets with additional certifications, according to State of the Voluntary Carbon Markets 2013   – an achievement Rezende is especially proud of, given that the standard does not have “major” organizations standing behind it. More findings around the standard combo’s uptake will be featured in the full edition of the State of the Voluntary Carbon Markets 2013 report, to be launched late next week.

The standard has so far certified forestry projects in Brazil and Sierra Leone, power plants in China, Indonesia and Turkey, fuel switching and composting in Brazil and is negotiating with the government of Angola to certify all Clean Development Mechanism (CDM) projects using it.

The standard defines a methodology based on a sustainable livelihood approach that can measure the contribution to sustainability in a region on a long-term basis, Rezende explains. Project developers establish a baseline (i.e. determine “business as usual”) using – indicators that point to degrees of sustainability correlated to six resources: social, human, financial, natural, biodiversity and carbon. Developers must then demonstrate that there is an improvement throughout the lifetime of the project with respect to this baseline – as charted in independently verified SocialCarbon monitoring reports.

The indicators are given a score ranging from the most precarious scenario at Level 1 and ending at the ideal situation, the sustainability of resources, at Level 6. Goals are set for improvements, and while indicators could worsen in the second or third years of the project, the main goal is to have all indicators at the best score possible by the end of the project, he said.

For Zubair Zakir, SocialCarbon is a good framework because it allows for the creation of indicators relevant to specific project types.

“I don’t think the standard has actually been done justice yet in the types of projects it has been applied to,” says Zakir, global carbon director of The CarbonNeutral Company.   “I think there are many more projects it could be applied to.”

He especially admires the standard’s concept of demonstrating continual improvement as a way of designing projects and rewarding on that basis.

“They took a really complex issue and made it simple,” he says.

In addition, its bottom-up approach to determining what constitutes sustainable development, rather than a limited top-down approach, allows for addressing local issues that are relevant to the community, Zakir says. He cites the Rio Ceramics Biomass project,   whichreplaces heavy oil with renewable biomass to generate energy at three ceramic brick manufacturing facilities in Rio de Janeiro, Brazil. Workers in the favela collect waste wood from their neighborhood to sell to the factories as part of the fuel switch, and   Zakir says this is a great example of the benefits of the bottom-up approach – as the reverse strategy would have resulted in a burdensome administrative process that wouldn’t be able to tap into the realities of the communities, he says.

“It wasn’t prescribed,” Zakir says. “It was just a natural reality. We wouldn’t have found it elsewhere.”

Indeed, he says, such a project would have been inconceivable under the Kyoto Protocol’s Clean Development Mechanism (CDM).

“It would be hard to see this being possible in a CDM project where long-term, consistent availability of biomass supply is an integral risk for buyers investing into such projects – or at least was when there was a CDM market,” he says.

The workers in the favela have started an association, which has given Zakir feedback that the project enabled local residents to understand recycling in an area where there is no waste collection and provided an income to residents of the favelas. “It’s not fantastic work, but you get paid for something we do,” he says, noting that the CarbonNeutral Company has bought all the tonnes generated from the project to date.

Ekobil Environmental Services and Consultancy often chooses SocialCarbon for its projects in Turkey, even if it is possible to develop a project according to another standard, because it sees more opportunities for improvements to the project rather than just showing its good aspects, said Asli Sezer, owner and consultant of Ekobil.

“We are living in urban areas in general and the industrial production of everything has overcome our lives and slightly alienated ourselves from nature and our social roots,” she says. “When somebody becomes climate conscious, you start questioning these issues so social carbon is very good to practice from this aspect.”

Turkey is in a difficult situation in that by definition it is a developed country, listed under Annex 1, but is a developing country based on other UN criteria, she notes. Turkey cannot claim CDM projects because of its Annex 1 designation, which means there is no chance for Turkey projects to participate in the compulsory market and no guarantees that its tonnes will be sold in the voluntary market.

“We don’t have the leverage of telling our offset buyers to buy these credits for potential future compliance purposes,” she says, adding that the first few projects the company has developed sold to brokers for about US$1-2.

Ekobil and its project owner clients issued about 420,000 tonnes last year and just issued another 270,000 tonnes, with an additional 130,000 tonnes due to be issued this summer under the company’s account. By the end of the summer, one of the project owners will add about 800,000 tonnes of SocialCarbon-labeled VCUs to its account.

Renewable energy is the low-hanging fruit in Turkey so Ekobil is looking at many projects with renewable technologies, implementing the SocialCarbon standard on top of VCS for mostly hydro projects.

For some of the large renewable project owners, the SocialCarbon metrics have opened their eyes and ears and they have started to scrutinize their mission vision statements, and some even started to seek consultants to issue sustainability reports, Sezer says.

“SocialCarbon is a standard that is supposed to evaluate the social impacts of a project, but in Turkey, it is also improving and contributing to businesses,” she says. “I guess this was an unexpected effect of the standard.”

In general, there is a negative perception of hydroelectricity in the country and there are public campaigns against hydro power plants, mainly in the Northern Black Sea coast of Turkey, yet people still use the rivers as dumping grounds, Sezer says. But now the projects that implement the standard are not only cleaning up this garbage, but also starting public awareness campaigns to teach the importance of protecting the waters, she says. The campaigns usually start with school children and then target women in the nearby settlements.

There have also been instances where project owners have agreed to stakeholder requests to stop producing electricity during the hot summer seasons – using that period for major maintenance and repair operations – and releasing the entire water stream to the river bed so that nearby fruit plantations can be irrigated. These agreements were achieved by the dialogue established within the SocialCarbon framework, Sezer says.

SocialCarbon also allows for the identification of immediate threats posed by climate change, such as the growing industrial production that threatens the animal population in Turkey that some members of the local population earn their living by keeping, she said. “It is a very good way of presenting a very complex problem,” she says.

Zakir says he is interested in seeing how the SocialCarbon standard evolves, particularly on the types of indicators developed around health and gender issues and innovations in biodiversity.

“There is much I think they can work on, but their framework, having been created in the developing world and relevant for local factors, remains something that is unique,” he says.