Mexico’s Sierra Gorda Biosphere Reserve links more than 260 small-scale farmers in a project that helps them earn carbon income for planting trees.  It’s the kind of project that addresses the needs of poor people around the world, and last month it was validated under two leading standards.  But can that success be replicated? 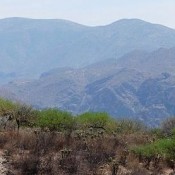 Since then, however, standards have become de rigueur, and buyers have grown leery of any project that doesn’t conform to one.   That leaves early movers like Sierra Gorda at risk of being left behind by the very markets they helped to create.

To avoid that trap – and also to blaze a path for similar projects – Sierra Gorda this month wrapped up three years of validation to become the first Mexican forest carbon project recognized under the VCS, which is the most widely-accepted standard among buyers for determining the amount of carbon storage that can be attributed to human action.   The project also earned “Gold” validation under the CCB Standard, which focuses on benefits beyond carbon such as job creation and habitat conservation.

“Validation under these standards demonstrates the integrity of Sierra Gorda’s offsets and the overall value of the efforts to restore ecosystems, preserve biodiversity, alleviate poverty and sequester carbon in the Reserve,” said Timothy E. Wirth, president of the United Nations Foundation, which purchased the first tranche of offsets in 2006.

The validation is especially significant because Mexico is likely to be the first country encompassed for offsets under any US state or federal system, and because there is rapidly growing interest within Mexico in carbon offsets as part of its own climate commitments and from an increasingly active domestic voluntary market.

“We did this in part to ‘ground’ the global markets in local capacity by finding ways for small landowners to get certified,” says Martha Isabel “Pati” Ruiz Corzo, general director of Grupo Ecolí³gico Sierra Gorda IAP.   “Our success is a step in the right direction, but there is a long way to go.”

Ruiz founded Grupo Ecolí³gico Sierra Gorda IAP in 1989 to promote conservation in Sierra Gorda. As a result of the organization’s efforts, the Mexican government delineated the Sierra Gorda Biosphere Reserve in 1997, and the reserve is now part of the UNESCO World Network of Biosphere Reserves and the most ecosystem-diverse protected area in Mexico.   It ranks second in the country in terms of overall biodiversity.

1997 was also the year the Kyoto Protocol was signed – and, not coincidentally, the year that Ruiz first turned to carbon finance.   Initially, she hoped the Protocol would make it possible for small-scale farmers to earn carbon credits for planting trees.   She soon came to believe that the Kyoto process was too cumbersome and costly to support the kinds of projects that such landowners could deliver, and turned instead to the voluntary markets.

Officially dubbed “Carbon Sequestration in Communities of Extreme Poverty in the Sierra Gorda of Mexico,” the project is expected to include a total of 289 small reforestations through 2013, some as small as a half-hectare, in 53 communities spread across mountains, valleys, and canyons, with a total of 305.7 hectares.

“These are the kind of people you have to bring into the market if this is to succeed,” says Corzo.   “Unfortunately, the Kyoto Protocol – and even the voluntary market – is geared to larger projects, and the result is that local people can’t take advantage of the opportunity.”

The Sierra Gorda also acts as a massive water filter for downstream areas and supports valuable biodiversity, so one year after selling her first tranche of carbon offsets Corzo decided to investigate the possibility of getting the project’s existing highland reforestation efforts certified to CCB and expanding into other ecosystem services.

In 2007, Corzo contacted Jacob Olander, Director of the Katoomba Incubator for advice.

A project of environmental non-profit Forest Trends (publisher of Ecosystem Marketplace), the Incubator supports carbon projects it believes can contribute to the body of knowledge available to local stakeholders – which is also part of Corzo’s mission.

“Reviewing Sierra Gorda’s activities, we saw the key near-term opportunity was in enhancing the value of reforestation they already had going on – very small-scale parcels with native pines in extremely poor upland communities – through VCS and CCB certification,” says Olander.

Corzo initially balked at the proposal, in part because she believed – and still believes – that global standards are too bureaucratic and expensive to meet the needs of small-scale farmers.   In the end, she took the plunge to keep up with the times and to nudge the standard in a direction more amenable to the kinds of people she believes need it most.

“We had been reading in the annual State of the Voluntary Carbon Markets reports how more and more buyers wanted VCS, and we had also been hearing that CCBA recommended combining its validation with validation from a   carbon accounting standard,” says David Ross, a longtime consultant to the Sierra Gorda project.   “In the end, there were just more arguments in favor than against.”

Corzo says the real value will come when the project is replicated elsewhere – something Sierra Gorda is able to achieve locally, but which she believes will remain difficult in the short term.

“We learned a lot, but it was really expensive learning, and it will take a while before this can be replicated using local capacity,” she says.   “Without the support of the Katoomba Group, for example, we wouldn’t have been able to make it happen, and that means others won’t be able to make it happen until local operators learn how to facilitate working with so many private landowners.”

She believes that more pilot projects are needed before more such local projects can proliferate in the developing world under existing global standards, but adds that local governments can move the process along by developing their own protocols more suited to local conditions.

Sierra Gorda, for example is marketing a complete basket of offsets.   Those certified under VCS and CCB are listed as premium credits that can be sold both internationally and domestically, but the basket also contains “solidarity” credits that follow more flexible guidelines and are designed to be sold domestically and are expected to be validated by the National Forestry Commission (CONAFOR).

Though launched by Ecolí³gico Sierra Gorda in 1997, the project has been formally managed by Bosque Sustentable since 2001.   Bosque Sustentable monitors the reforestations to quantify the amount of carbon dioxide being captured as part of the natural process of tree growth. It then offers carbon offsets in national and international voluntary carbon markets.

Organizations, businesses and individuals who want to contribute to the fight against climate change can calculate the amount of global warming gases that they emit into the atmosphere as a result of their production processes or use of transportation and electricity. After reducing their emissions to the maximum extent possible, they can choose to offset their remaining emissions by making a donation to Bosque Sustentable, which in turn pays small farmers to plant and manage trees to capture a corresponding amount of carbon dioxide.

“The Bosque Sustentable project represents a forest carbon project of the highest quality,” says Jeff Hayward, director of the Climate Program at Rainforest Alliance, which carried out the external validation. “It offers significant benefits to both local communities and biodiversity in addition to climate change mitigation through carbon sequestration in the growth of planted trees. This project will serve as a model for the development of future small-scale forest carbon projects in Mexico and internationally.”