Israel’s biodiversity is under threat from a list of sources that include urbanization, water scarcity and habitat loss. To beat this threat, a group of scientists, government officials, market experts and others are examining biodiversity financing programs from around the world to implement in Israel that will improve conservation. 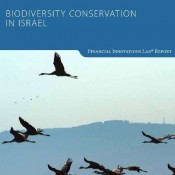 Israel’s biodiversity is under threat from a list of sources that include urbanization, water scarcity and habitat loss. To beat this threat, a group of scientists, government officials, market experts and others are examining biodiversity financing programs from around the world to implement in Israel that will improve conservation.

This article has been adapted from “Financial Conservation in Israel”, a Financial Innovations Lab ® Report published last week by the Milken Institute and available for download here.

30 July 2012 Urbanization, industrialization, and climate change are taking a greater toll on the planet by the day. Human activity is having a profound effect on the ecosystems that surround us. As populations increase and once open land is developed, species and habitats disappear. This destruction affects water quality, soil erosion, and agricultural productivity.

These trends are starkly apparent in densely populated Israel, where water is scarce and competition over land use is fierce. Located at the nexus of three continents, it has always been home to an exceptional diversity of flora, fauna, and complex ecosystems. For a nation of such small land area, it boasts a disproportionate percentage of global biodiversity.

But as population density has grown steadily over the past decade, there has been a sharp increase in commercial and residential development in once-pristine areas that supported a rich variety of animal and plant life.

Vultures, multiple bat species, and Eurasian otters (lutras) are just a few of the many creatures whose numbers have dwindled to critical levels. The Hula painted frog, which was thought to be extinct, has been spotted again, but it remains on the brink.

Scientists have warned that up to one-third of the plant life along Israel’s coast may be in jeopardy. And disappearing sand dunes threaten the survival of unique desert creatures.

There is an urgent need for improved conservation. But previous efforts to protect the country’s environmental assets have largely relied on regulatory policies alone, with a focus on designating protected areas through a national park system and statutory land-use master plans. This has proven ineffective in stopping habitat fragmentation and degradation as a result of agricultural, residential, commercial, and industrial development.

Biodiversity, as a public good and as a pool of environmental assets, is currently undervalued and at risk. There has been no incentive to change market behaviors toward land use. Public budgetary expenditures for conservation of open areas, for the national parks authority, and for sustainable local development have been inadequate.

In recent years, however, financial mechanisms have been created around the world to create new incentives and new momentum for conservation efforts. Payments for ecosystem services, land auctions, and other compensation programs have been utilized in multiple countries.

Biodiversity banking, for example, creates opportunities for developers to trade the offsets of potential destruction while earning revenues on increasing land values.

The time has come for Israel to join the ranks of both developed and emerging nations around the world that have adopted biodiversity financing programs. The programs now in place include watershed and wetland protection, water services, soil conservation, wildlife protection and carbon sequestration, land management agreements, recreation, and initiatives to clear invasive alien plants and restore the beauty of the natural landscape.

Could these ideas work in Israel? The Milken Institute, in conjunction with Israel’s Ministry of Environmental Protection, convened a Financial Innovations Lab ® to evaluate potential incentive programs and other financial mechanisms that could be used to appropriately value the nation’s biodiversity.

The session brought together a diverse group of scientists, capital market experts, governmental officials, foundation executives, architects, and land developers to design potential models and localize the best international solutions to fit the Israeli context.
Participants discussed how to achieve the optimal level of conservation while maintaining cost efficiency. Following presentations on specific programs in countries like the United States and Australia, participants debated which models could be most applicable to Israel. There was a focus on identifying and overcoming potential barriers to the adoption of these models. Participants then suggested examining case studies to further test the feasibility of financial mechanisms to align environmental protection with economic growth in Israel.


Please see our Reprint Guidelines for details on republishing our articles.