As the world begins to pay more attention to the voluntary carbon market, The Ecosystem Marketplace spotlights a pioneering project in Southern Mexico that has been using a sustainable development model to produce—and sell—carbon offsets for over ten years. 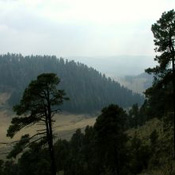 As the world begins to pay more attention to the voluntary carbon market, The Ecosystem Marketplace spotlights a pioneering project in Southern Mexico that has been using a sustainable development model to produce—and sell—carbon offsets for over ten years. In the Tzeltal dialect of Southern Mexico, Scolel  means the tree that grows. According to those involved, this translation suits the fast growing Scolel carbon sequestration project in Chiapas, Mexico. Scolel uses the sale of carbon credits on the voluntary carbon market to fund agroforestry efforts that reduce greenhouse emissions while advancing much needed sustainable development. Since its launch in 1994, the project has expanded from Chiapas to Oaxaca and it is now a viable business, involving over 400 farmers from 30 different communities and a range of ecosystems. The project, which is jointly managed by the Edinburgh Centre for Carbon Management (ECCM) and a co-operative of foresters and agronomists known as AMBIO in Mexico, finds carbon buyers who want to buy carbon credits for reasons other than compliance and connects them with farmers who want to sell carbon credits generated by innovative land use practices on their land. In a market where many believe that cost-effective greenhouse gas emission reductions and sustainable development in impoverished rural areas do not usually go hand-in-hand, Scolel’s success is noteworthy. But the Mexican and British researchers who work with indigenous farmers on the project, say the secret to their success is surprisingly basic: Instead of giving key responsibilities to outsiders, this project puts a strong emphasis on making community members participate. “The greatest strength of this project is social participation,” says Dr. Miguel Angel Castillo, head of the Laboratory of Geographical and Statistic Information (LAIGE) of Ecosur in Chiapas. Of course, the project is not exempt from the problems of the real world and Castillo is the first to admit that working with poor rural communities can be difficult. “Because approximately 70% of the forests in Mexico are under a common property regime called ejido, this project is mainly addressed to the inhabitants of ejidos. These people live in areas with high biological richness but are very poor,” says Castillo. “Working with poor people with strong social conflicts implies high administrative costs. Also, it means that management procedures are time-consuming and that it takes a lot of effort to explain the project to community members.” On balance, though, Scolel seems to have come up with a system that is satisfying both the indigenous farmers generating carbon credits and the companies and individuals buying them. How does the system work? According to those involved, it all boils down to a simple step-by-step process.

The first step, says Castillo, is to look carefully at the economic realities and priorities of the region in which you are working. And the best way to ascertain people’s priorities, he says, is simply to ask them what they are. For instance, farmers attending a workshop in the Marqus de Comillas region recently concluded, “Cattle raising is currently the most important economic activity from the point of view of our communities. That is why its planning must be considered a priority, the same as the implementation of projects that reduce the pressure on forested areas…In the near future, forestry and agroforestry can become one of the main activities. Therefore, it is compulsory to develop mechanisms that encourage them.” After the first appraisal phase, farmers joining the Scolel project are asked which activities they want to implement. With the assistance of local promoters, they generate planes vivos (working plans) that suit their particular needs. According to the farmers: “Planes vivos are tools that help us plan our work and to supervise it. At the same time we can identify the drawbacks of our productive systems. Planes vivos also help us to find alternatives and solutions.” If the plans comply with a set of specifications preset by farmers, technicians and scientists, they are registered with the trust fund Fondo BioClimatico and are eligible to generate carbon services. In Oaxaca, Servicios Ambientales de Oaxaca (Environmental Services of Oaxaca; SAO), a local non-profit, collaborates with AMBIO, but both organizations also rely heavily on community teams to do the fieldwork. “The desertion rate is very low. Only about 2% to 3% of the farmers have deserted. The project is solid because it’s based on the local people’s own priorities and decisions,” says MSc. Elsa Esquivel, the legal representative of AMBIO. “The advantage of keeping community members involved in the project from beginning to end,” says Dr. Richard Tipper, head of science at ECCM, “is that it allows farmers to acquire useful skills such as mapping, surveying financial planning and silviculture. And with the help of community members, each project can work with a small administrative and technical staff of just 2 to 4 people.” Keeping administrative numbers down means that more money can go back to the farmers who need it most. In 2002, for instance, Scolel generated roughly US$180,000 through the sale of its carbon credits. Of the sale price, 60% is assigned to farmers and communities for the implementation of forest activities and 40% goes to technical, financial, legal and administrative support. The improvement of local livelihood is not huge but considerable (each family gets between $300 to $1,800 per year). One way of measuring the possible benefits of the project (and of gauging opportunity costs) is to compare the potential revenues of the timber being grown by the project to the potential annual revenues of producing corn, the predominant alternative in the region. A rough comparison of these two activities shows the annual return of 1 hectare of trees (800 trees/ha) can be as much as 1.5 times higher than the annual return of 1 hectare of corn.

Even with all the local involvement, AMBIO’s Esquivel says the project management costs can creep up. “We have a very good price,” she says of the US$12 to $15 per ton that Scolel charges for its carbon. “We actually should sell at higher prices because we work with small-scale farmers working on 0.5 ha or 3 ha at the most. Therefore our administrative costs are high. Even when $15 seems to be a good price, it just covers the farmers’ costs and the true profits will come when trees grow and the timber can be sold, but that usually takes a long time. Higher prices would immediately benefit the local economy and encourage farmers to keep up with forestry activities.” “Other organizations,” says Esquivel, “sell at US $3.0 to $4.0 per ton of carbon, but some of them come and go, while we represent permanence in the market. We’ve been selling carbon for nearly 10 years.” Scolel’s comparatively long history in the carbon market also allows it to refine its estimates concerning just how much carbon is sequestered when farmers adopt each of several land-use practices. For instance, researchers originally estimated that, in a 25 to 35 year-period (depending on the tree species involved and on-site conditions), protecting closed forests would generate 300 tons of carbon per hectare. Converting pastures to tree plantations, on the other hand, was thought to lock up 120 tons of carbon per hectare, while growing fruit and timber trees (such as Spanish cedar) intercropped with maize or other annual crops was believed to sequester 70 tons of carbon per hectare. Because the project now boasts several plots that have been established, researchers at Ecosur are running tests to determine whether or not these numbers are accurate. The first results will be available on January 2007. For the time being, buyers seem ready to take the original estimates on faith. In 2005, Scolel Té says it sold 10,038 tons of carbon offsets to clients that included the FIA Foundation (a leader in road safety campaigning and research), the World Bank, and the Cathedral of Guadalajara. For 2006, the FIA Foundation has confirmed that it will purchase 8,300 tons of carbon, while The CarbonNeutral Company, a UK-based retailer of offsets, has said it will buy 5,090 tons from the project. Esquivel says it would be ideal if buyers would confirm purchases, but, she adds, “the truth is that carbon emissions are sold day to day, so we will only know the 2006 balance by the end of the year.”

For interested observers, the real test of Scolel’s model will probably be whether or not it can be replicated in other countries. Scolel was the original test-bed for the Plan Vivo System, a certification standard for offsets that was developed by ECCM. All Plan Vivo projects share the objective of safeguarding the investments of carbon service purchasers while enhancing rural livelihoods and improving the environment. Farmers’ plans for forestry activities are always registered in local trust funds, allowing buyers to purchase offsets through the trust fund. Drawing from the Mexican experience, Plan Vivo recommends a set of procedures that deal with issues such as administration, planning, monitoring and processing transactions. Currently projects following the Plan Vivo system are operating in India, Mozambique, and Uganda. The “tree that grows,” it seems, is spreading its branches far and wide. First published: August 15, 2006 Please see our Reprint Guidelines for details on republishing our articles.