The once-promising REDD text has passed from the scientific negotiating track to the long-term action working group with key provisions unresolved after Norway vetoed a last-minute compromise that Papua New Guinea had brokered between Brazil and the United States. At issue is the amount of verification that recipients of REDD finance will be subject to. 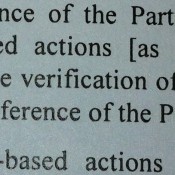 The once-promising REDD text has passed from the scientific negotiating track to the long-term action track with key provisions unresolved after Norway vetoed a last-minute compromise that Papua New Guinea had brokered between Brazil and the United States. At issue is the amount of verification that recipients of REDD finance will be subject to.

2 December 2012 | Doha | Qatar | The first week of climate negotiations at the 18th Conference of the Parties (COP 18) to the United Nations Framework Convention on Climate Change (UNFCCC) wrapped up on Saturday with no agreement on how to verify emission-reductions in programs that reduce greenhouse gas emissions from deforestation and forest degradation (REDD).

As a result, when negotiations on Long-term Cooperative Action (LCA) resume, negotiators will be dealing with a text that is “bracketed”, meaning that key provisions requiring third-party verification are labeled as being in dispute. Although a resolution is possible before talks end on Friday, it’s just as likely that the LCA will send the text back to the Subsidiary Body for Scientific and Technological Advice (SBSTA), pushing agreement on REDD off for another year.

Negotiations seemed on track until Friday, and even received a boost when Norwegian negotiator Eirik Brun Sí¸rlie announced that representatives from his government, together with representatives from the United Kingdom, United States, Germany, and Australia, had agreed to dramatically ratchet up the amount of money flowing to Verified Emission Reduction projects and REDD.

Additional text regarding verification was then introduced into the REDD  text, prompting a challenge from Brazilian Negotiator Natalie Unterstell and launching an all-night standoff between Brazil and the United States.   That didn’t end until Saturday evening, when Papua New Guinea negotiator Federica Bietta called the Brazilian delegation to an unprecedented meeting in the back of the conference hall with representatives from the G-77.

Fifteen minutes before talks were to end, the Brazilian delegation emerged from the meeting and, speaking on behalf of the G-77, announced that it would agree to move the conversation on finance to the preamble if developed countries could be flexible on the stringency they were seeking for verification. The United States said it was ready to talk – but then Norway said such an agreement would be meaningless.

The Bracketed Text And What It Means

The disputed text is two paragraphs from the draft SBSTA text, and essentially says that if the developed countries put money on the table (“…if the Conference of the Parties adopts a decision on specific arrangements for financing results-based actions…) then developing countries would agree to let their actions “be verified through an independent, international verification process, undertaken by experts drawn from the roster of experts.”

Here is the complete bracketed text:

Paragraph 14. Also decides that the information reported in accordance with paragraph 7 above will be subject to international consultation and analysis as agreed by the conference of the Parties;

Paragraph 15. Also decides that if the Conference of the Parties adopts a decision on specific arrangements for financing results-based actions [as referred to in decision 2/CP.17, paragraph 64] additional guidance for the verification of those results would be developed if necessary,

Decides that the results from results-based actions as referred to in decision 2/CP.17, paragraph 64 will be verified through an independent, international verification process, undertaken by experts drawn from the roster of experts;

Requests SBSTA to develop modalities and procedures for the verification process referred to in the paragraph above for consideration by the COP at its 19th session;

An earlier draft of this story said that the bracketed text would now pass to high-level negotiators, and not to the LCA. We regret the error.

REDD In Doha: What You Need To Know (And How You Can Get To Know It)

Steve Zwick is the Managing Editor of Ecosystem Marketplace. He can be reached at SZwick@ecosystemmarketplace.com.
Please see our Reprint Guidelines for details on republishing our articles.

Panelists Explore Post-Doha Prospects For Bridging Global Climate Finance Gap offers an analysis on Doha’s impact on climate finance from the perspective of industry leaders a month after the event.