Deforestation and outdated farming methods combine to generate more than 30% of all greenhouse gas emissions, which is why financing mechanisms aimed at tackling both are hot topics as UN Climate talks open today.  The REDD+ Partners spent Sunday working through their two-year work program, and are set to post the latest version on Wednesday night. 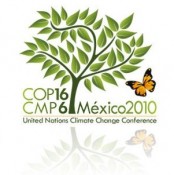 Deforestation and outdated farming methods combine to generate more than 30% of all greenhouse gas emissions, which is why financing mechanisms aimed at tackling both are hot topics as UN Climate talks open today.   The REDD+ Partners spent Sunday working through their two-year work program, and are set to post the latest version on Wednesday night.

29 November 2010 | CANCUN | If all goes well this week, the REDD+ Partners won’t have to see, hear, or speak to each other in an official capacity again until next year.

That’s a good thing because it will mean they’ve agreed on a work plan for 2011 and 2012 – a small step, but a meaningful one after a year of false starts, discord, and frustration that degenerated into a blur of finger-pointing in October when members failed to agree on the role of stakeholders and indigenous groups.

“There’s now a recognition that if you don’t dig down to find out what the real drivers of deforestation are, the whole thing will come to naught,” says Peg Putt, former leader of the Tasmanian Green Party in Australia and now a climate-change campaigner for The Wilderness Society. “As a result of stakeholder input, we now have real galvanization within the Partnership that there must be action on that.”

On Wednesday, current co-chairs Federica Bietta, who represents Papua   New Guinea, and Junya Nakano, who represents Japan, will post the latest version of the Partnership’s official work plan for the next two years.   Stakeholders and other partners will then have until 8pm Sunday, December 5, to make comments, either via e-mail or through bilateral discussions, and the final version will be posted at 8pm on Monday, December 6.

“At that point, if there are no objections, it will be approved,” said Bietta on Sunday as she wrapped up a cordial and even productive negotiating session.   “If there are objections, we will consider what will be the next step, but the way it looks now, I’d say this is our last meeting of the year.”

She added partners and stakeholders will have until Wednesday, December 8, to make objections.

The work plan is a humble product for the ambitious Partnership, which France and Norway launched in March to support   the United Nations Framework Convention on Climate Change (UNFCCC) and the Copenhagen Accord.

The Accord, hammered out in the closing hours of last year’s climate-change talks in Copenhagen, Denmark, recognized the need to develop financing mechanisms that promote the capture of carbon in nature’s living ecosystems.   The Partnership’s stated aim was to help the the United Nations Framework Convention on Climate Change (UNFCCC) test schemes that use carbon finance to rescue endangered virgin rainforests and reduce greenhouse gas emissions from deforestation and forest degradation (REDD), as well as “REDD+”, which builds on REDD and also promotes sustainable forestry and other practices that capture carbon in plants and soil.

As negotiators prioritized the work plan on Sunday, however, it became clear that the organization still lacks a clear mission.   Delegates seemed split between those who want to emphasize demonstration activities within the parameters laid out by the UNFCCC and those who want to expand more quickly into a general capacity-building function that promotes REDD readiness.   Some negotiators wanted to expand the agenda even further – to include, for example, more “equitable” additionality criteria that will not punish countries that have been not been deforesting (under current UNFCCC guidelines, REDD credits can only be awarded for saving a rainforest that is endangered, and endangered forests are located in countries that have been chopping them down).

Brazilian negotiator Thais Linhares Juvenal, who takes over as Partnership co-chair on January 1, repeatedly pressed for a narrower focus that will enable them to “get things done”.